‘It’s dumb luck no one was killed’: Police search for motorists affected by erratic teen driver 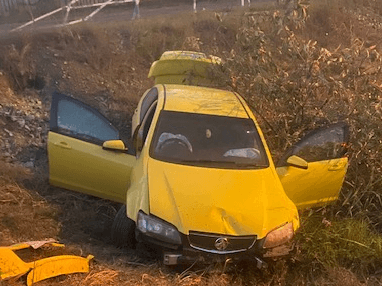 Police are looking to speak to drivers in the Greater Darwin area who were run off the road or had to take evasive action after an “erratic” teen driver ran multiple red lights at major intersections at high speeds last month, ultimately crashing her car in Palmerston.

Police said the 18-year-old female was driving a yellow Holden SS Commodore erratically and at dangerous speeds on April 22, between 6pm and 6:30pm, between Darwin and Palmerston, running multiple red lights at major intersections.

“The driver has run a red light at the intersection of Roystonea Avenue and Temple Terrace, before losing control and crashing the vehicle at the corner of Roystonea and Owston Avenue. She was arrested by police at the scene,” a statement said.

Police said both the driver and the passenger were uninjured.

They are now looking to speak to drivers who witnessed the rampage.

“The vehicle was observed to be driving on the wrong side of the road into oncoming traffic, forcing other drivers to take evasive action resulting in a number of near misses along Stuart Highway, Berrimah Road, Wishart Road, Kirkland Road and Roystonea Avenue,” said Senior Sergeant Paul Faustmann.

“This type of driving is exactly how fatalities occur in our community and it is utterly reprehensible. It is complete dumb luck that no one was killed.”

Police did not say if alcohol or drugs were involved.

Anyone who was affected by the dangerous driving is asked to contact police on 131 444 quoting reference number 9665588.