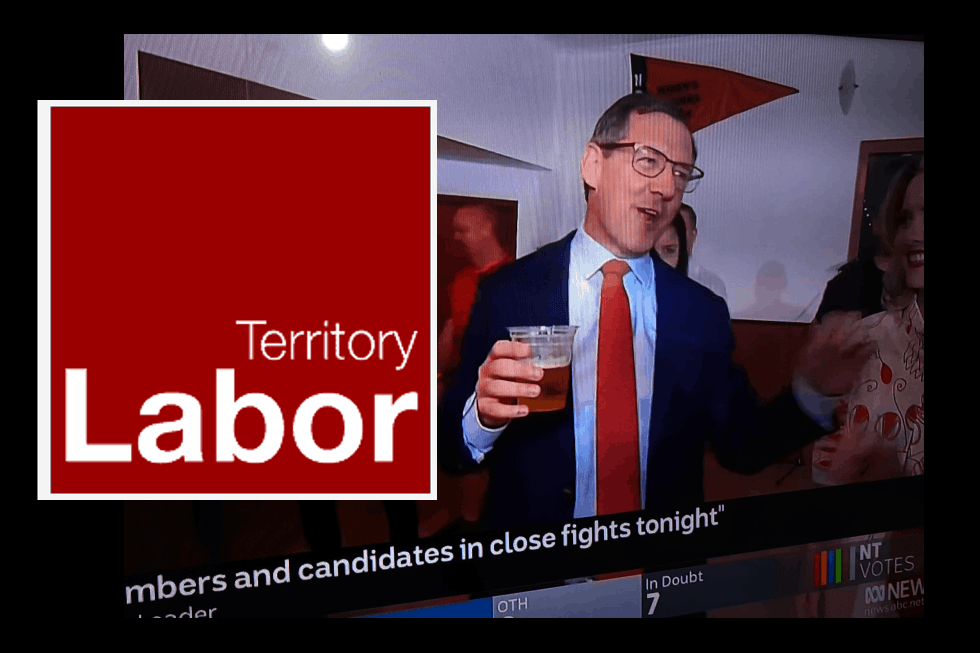 The Gunner Labor Government has been re-elected but by late Saturday night it remained unclear how big its expected majority will be.

The Territory Labor party is tipped to easily hold on to 12 seats, with more expected by Sunday and in the coming days.

A number of key seats are still undecided but the CLP has made the most gains, with political experts expecting them to move from two seats to six.

Territory Alliance was the biggest loser on the night, with leader Terry Mills losing his seat of Blain, former Labor MLA Jeff Collins was pummeled in Fong Lim and deputy leader Robyn Lambley was hanging on to her seat of Araluen by just a handful of votes late Saturday night.

The NT appears to have elected only two independents this time around, with Kezia Purick holding her seat of Goyder and Yingyia Mark Guyula withstanding a political onslaught by Labor’s Lynne Walker in Mulka.

Chief Minister Michael Gunner stalled his speech Saturday night until roughly 11:30 pm when the party determined he would hold enough seats to notionally form government. While he’s currently sitting at a projected 12 seats, it’s expected at least one more will fall in Labor’s direction bringing them past the 13 needed to form a majority government.

In his speech to the party faithful, Mr Gunner referenced a trying year for himself personally, after suffering a heart attack, having a baby and dealing with the coronavirus pandemic.

“We can make the Territory Australia’s comeback capital.

“We celebrate tonight with a beer or two and then tomorrow it is back to work for the people of the Territory and for the next four years.”

It was an odd election night that saw measured responses from all party leaders.

Earlier, CLP leader Lia Finocchairo did not concede defeat, telling her supporters that “the CLP is back” after being nearly wiped out in 2016.

“As a party, we have rebuilt and we have strengthened our resolve, because the Territory needs us,” she told supporters. “It needs the Country Liberal Party to be that strong conservative voice.”

Ms Finocchiaro will easily hold her seat of Spillet and it’s expected the party will pick up others seats including Terry Mills’ seat of Blain, Brennan and possibly Barkly and Namatjira, although those electorates remained extremely close.

It’s also expected the CLP will pick up Gerry Wood’s former seat of Nelson, with Gerard Maley easily defeating Mr Wood’s pick Beverly Ratahi. The CLP is also expected to knock off Labor Minister Dale Wakefield in Braitling, which would make Ms Wakefield the only Labor minister to lose, although Selena Uibo in Arnhem is also in a close contest.

Territory Alliance’s campaign headquarters in Pinelands closed up early Saturday night, with Mr Mills saying it was not the end of the new party that was attempting to shake up the established two-party system that has ruled the NT since self-government.

“We actually have a very long term view here,” Mr Mills said. “We do believe that there needs to be a reset in Territory politics.”

Despite a strong showing in the Johnston byelection in February, the party was unable to capitalise on momentum, which Mr Mills suggested was the result of the pandemic.

“COVID has had a particular effect in the Northern Territory and that was something we couldn’t have predicted particularly as a young party, very difficult to campaign,” he said. “And still I think we’ve given it a good shot.”

Mr Gunner and the Labor party ran a campaign that steered attention away from his government’s last four years in office, opting instead to politicise the coronavirus pandemic and position his government as the only party that could keep people safe.

CDU political analyst Rolf Gerritsen said it was clear the risky strategy had paid off for Labor.

“They basically said the barbarians are at the gate and we’re the only one who can protect you,” he said. “But all that did was postpone the real issues and they will need to be addressed now.”

Mr Gerritsen said by failing to outline how they would fix the economy and manage an ever increasing debt level that is set to top $8.2 billion this year – up from $1.7 billion in 2016 when they were first elected – Labor had become “the party of the public service” and has become Darwin-focused.

“Politics is a sublimely silly business,” he said.