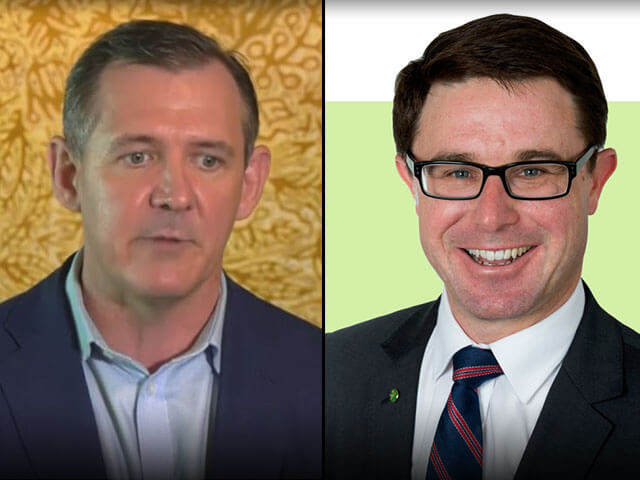 Mr Littleproud was in town this week to meet with stakeholders, including the NT Government, the Office of Northern Australia and the new head of the North Australia Infrastructure Facility, Tracey Hayes, to discuss key infrastructure projects for the NT and how they could be funded with federal money.

It’s expected the Federal Government will be looking to inject a lot of money into the battleground NT seat of Solomon that covers Darwin and Palmerston in the lead up to an anticipated federal election.

However, Mr Gunner backed out of the scheduled Wednesday morning meeting with the Minister to do a radio interview on Mix 104.9, defending his government’s handling of the growing grandstand scandal.

Mr Littleproud told the NT Independent he was hoping to discuss a new approach to developing the north and getting funds out of the $5 billion NAIF and into worthwhile projects that can benefit the Territory’s economy immediately.

“We wanted to make sure our focus was aligned,” he said.

“It’s important that I have a clear direction from those who live up here of what it looks like to develop the North and that those directions are not just coming from Canberra.

“But unfortunately, the Chief Minister had to cancel my meeting with him. It’s a partnership with them and we need to work with them to ensure we strategically develop the population of the north and diversify the economic base.”

Mr Littleproud said Mr Gunner cancelled the 9am Wednesday meeting the afternoon before with no explanation.

‘We felt the process had happened’: Gunner on grandstand proposal that he did not verify with department before approving in Cabinet

Mr Gunner appeared on Mix 104.9 yesterday at that time to defend his Cabinet’s decision to approve the $12 million Turf Club grandstand grant application, saying he and Cabinet had been given “bad information”.

“The ICAC report shows the quite extensive process that Cabinet thought was occurring … we believed that that had gone into the market led proposal process,” he said.

“So, essentially [the ICAC report] shows that the misconduct and deceit that occurred [by others] where we felt the 12-month process had happened, that the business case was essentially verified or being worked on … so Cabinet made a decision based off bad information…”

What the ICAC’s report actually states is that the Department of Trade, Business and Innovation was still in the process of establishing the grandstand funding application as a market-led proposal and were surprised to learn the money had been awarded as a grant in June 2019.

Mr Gunner did not ask the department about the status of the application before Cabinet approved it.

The ICAC also found the submission taken to Cabinet and approved was not scrutinised and had been drafted a day earlier by Mr Dixon and the Turf Club CEO.

Mr Dixon was later awarded the contract to build the grandstand by the Turf Club board that he chaired.

Despite being stood up, Mr Littleproud said he was excited about the opportunities in the Territory and would be fighting at the federal Coalition Cabinet table to extend funding to the NAIF for future projects here.

He also said he would try to meet with Mr Gunner again in the near future.

Mr Littleproud, who is also federal Agriculture Minister, said $3.1 billion of the $5 billion NAIF allocation had been spent after changes to way the program is administered, with the rest of the funding expected to be spent over the next 12 months on projects in the pipeline that include NT projects.

With Landbridge recently stating it would not proceed with its proposed luxury waterfront hotel, Mr Littleproud said there could be funding to help develop a project like that in the NT.

“Definitely those are the sorts of projects we’re looking at, if its creating wealth and growth,” he said.

“That’s the whole emphasis to make sure were diversifying the economic base and creating jobs in the north.”

Mr Littleproud said he would be back in Darwin soon to further discuss funding opportunities for the NT.