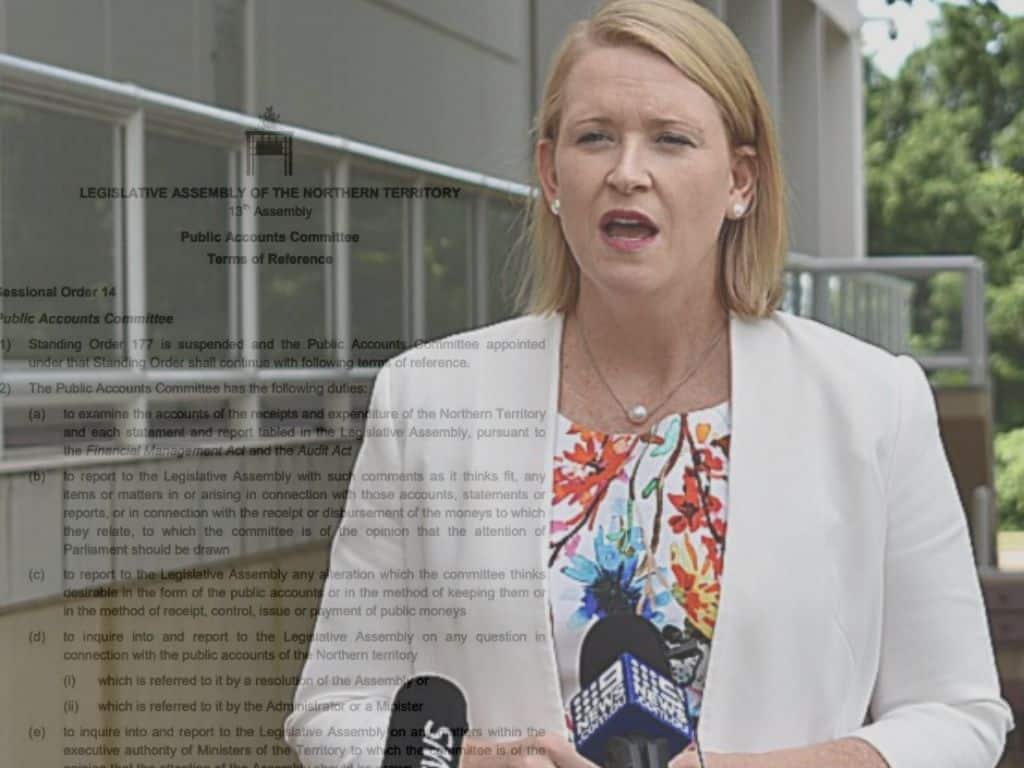 The Gunner Government’s coronavirus cash splash will now have some oversight by the Public Accounts Committee, in response to pressure on the government to account for its emergency spending after it delayed the Territory budget and scrapped Estimates hearings.

“This will be a very important process to make sure (questions are asked),” Ms Manison said on Thursday.

She said the government always intended to provide scrutiny of their spending, but did not mention the new measures last month in Parliament when the government gave her $300 million of taxpayer money to be used at her discretion for emergency coronavirus spending.

“We always wanted a level of scrutiny across this,” she said. “We think it’s really important.”

Under treasurer Craig Graham will also attend to answer questions.

Ms Manison passed an emergency supply bill in Parliament last month that permitted $3.4 billion to be used to keep the government running during the pandemic without a proper budget.

The budget will not be handed down until after the next election, she previously announced.

Of the $300 million Treasurer’s advance, $120 million has already been spent on stimulus and jobs programs.

Mr Mills said that striking the scrutiny committee now was too late.

“We welcome the scrutiny but let’s face it, this is after the horse has bolted,” he said. “Any value will be in the provision of facts rather than the ‘react first, think later’, response we’ve seen from Michael Gunner.”

Mr Mills reiterated his call for the August election to be postponed to October.

“The election is not to determine how well the public health crisis was managed under directions from experts, but to choose a government to reset and rebuild the economy,” he said.

But Ms Manison said the government was firm on keeping the date of the election August 22 and that the NT Electoral Commission was currently looking at how it would work.

“It is important that we have the election on August 22 because Territorians have only given us permission to be in government until August 22,” she said.

When asked how voting in remote areas would work during the pandemic, and how Indigenous Territorians could be protected, Ms Manison did not have an answer, but said they were “looking at all these elements right now”.

“We are looking at August 22 and we are working with health professionals around that,” she said.