Former chief minister Adam Giles was recently appointed to a key role with a start-up energy company that is currently in talks with Landbridge Group – the Chinese-owned company he sold the Darwin Port to in 2015 – to develop a massive hydrogen plant at the port site, the NT Independent can reveal.

Mr Giles was recently named “chairman-elect” with Verdant Earth Technologies, a small energy group that signed a non-binding agreement with the Darwin Port’s owner to further explore the joint development of what could be a $300 million hydrogen project at the port that would see green energy exported from the NT to Asia.

Verdant has not entered the Northern Territory before announcing its intentions last month to enter into a “strategic alliance” with Darwin Port owner Landbridge Group for the proposed project.

The proposal means Mr Giles could be involved in high-level negotiations with Landbridge Group on behalf of Verdant – a NSW-based energy company that is looking to establish itself as a major green hydrogen producer and exporter.

But for some reason that newspaper did not report Mr Giles’s involvement with Verdant.

Mr Giles signed the controversial 99-year agreement to lease the Darwin Port to Landbridge Group in 2015 for $506 million.

Mr Giles is well-known to Landbridge owner Ye Cheng, having met with him on different occasions when he was chief minister. 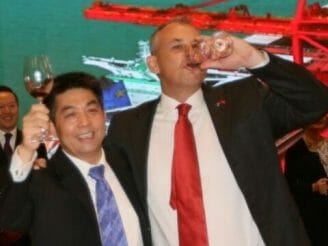 Verdant director Richard Poole said Verdant’s current operations in NSW involve using timber waste to produce green energy for the power grid and would be looking to do something similar in Darwin.

He had previously been involved in coal generation projects in the Hunter Valley region.

Mr Poole told the NT Independent he was aware of Mr Giles’s links to Landbridge but that he had not yet been involved in negotiations with Landbridge.

“I’m aware of it, obviously,” he said, adding that Mr Giles was recommended to him by “a couple of guys” and not brought on to negotiate with Landbridge.

“I actually really like Adam. We were looking for someone to help lead us through this next phase. And he’s a talented guy who has some skills that can value add and helps us with credibility. He has the ability to see through problems and find solutions.

“He was pushing us to come to Darwin. He was certainly an advocate for Darwin being a good place to be and that we should do business up there.”

The Giles CLP government’s decision to lease the port to Chinese-owned Landbridge Group has attracted increased scrutiny in recent months, with the Federal Government asking the Department of Defence to review the deal to determine if it presents any national security concerns amid increasing tensions with China.

Verdant’s proposed hydrogen hub partnership with Landbridge comes as the Federal Government recently identified Darwin as an ideal spot for a hydrogen project with hundreds of millions of federal dollars made available to help develop it.

Mr Poole said a feasibility study has commenced but said he expected development approval to take some time. He said the project could be valued between $300 – $400 million.

“A strategic alliance with Darwin Port would pave the way for the establishment of a green hydrogen hub at Australia’s nearest port to Asia and the country’s ‘northern gateway’ for Australasian trade,” he previously said about the project.

“Hydrogen continues to attract greater support from the Australian government with the recent Federal Budget commitment of a further $1.6 billion to fund priority technologies, including clean hydrogen.”

After losing the 2016 NT general election, Mr Giles has held various jobs, including a stint working for Gina Rinehart and hosting a short-lived Sky News “after dark” program that was cancelled shortly after Mr Giles invited a Nazi sympathiser on as a guest.

Mr Giles did not respond to questions.

Landbridge also did not respond to questions about the proposed project. The group had pledged to build a luxury hotel in Darwin, but works were suspended last year with the company saying if they did not resume by the end of this month, it will not be proceeding.