Feds kick extra $2 billion into NAIF ahead of federal election 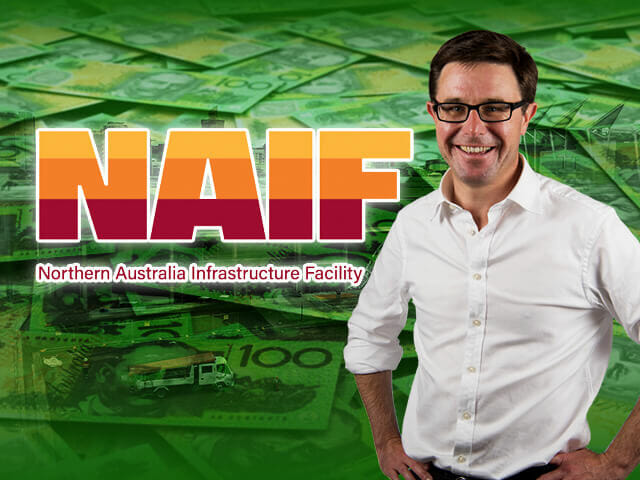 The Federal Coalition Government has boosted funding for the Northern Australia Infrastructure Facility, increasing it from $5 billion to $7 billion, with the federal minister making the funding announcement in Darwin Tuesday morning.

Minister for Northern Australia David Littleproud said the demand for the funding through NAIF – which offers loans to businesses looking to develop projects in the north – has continued to grow and he expected the $5 billion to be fully committed by the end of this year.

“The demand for NAIF funding continues to grow and it is likely to fully commit its current funding in the next year,” Mr Littleproud said.

“An additional $2 billion means these benefits stay in the north for generations to come.

“The NAIF will continue driving investment into pipelines of infrastructure across all sectors, from mining and agriculture to renewable energy, education and tourism.”

Mr Littleproud said the $3.2 billion in financing commitments to date will inject $16 billion back into the economy and “support around 11,000 jobs” across the north.

“Since 2016 NAIF has approved up to $710 million in loans for critical infrastructure projects in the Territory including up to $300 million for the Darwin Shiplift project which is expected to create up to 277 jobs and generate $924 million public benefit,” she said.

“This additional funding means even more opportunity for investment in our area and more benefits for our community.”

In October, the NAIF’s CEO Chris Wade resigned just hours before he was due to appear at Senate Estimates. The fund has been criticised by the Opposition for not moving quickly enough to get the funding out the door.