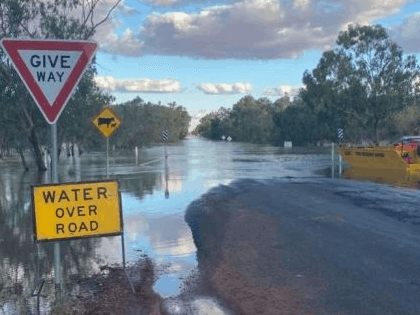 UPDATED: NT Police have recovered the body of a 50-year-old man believed to have drowned in floodwaters near Tennant Creek after he was last seen in the water Sunday afternoon.

The man was suspected of either falling into the water or consciously swimming in it near Seven Mile Bridge north of town.

Police initially said the 50-year-old man was “swimming” in floodwater but failed to resurface around 3:45pm on Sunday. Police did not say if the man had a vehicle or if it had become submerged.

The NT Independent understands the man was with family nearby when he was swept away by the water.

Heavy rains in the area Sunday made it difficult for emergency personnel to conduct the recovery mission which resumed Monday morning.

“Police and Emergency Service personnel conducted a land search of the area on foot and utilising motorbikes where accessible, up until last light,” a statement said.

“The body of a man was located some distance down the river. Police investigations are ongoing.”

On Friday, the NT Emeregncy Services issued a statement warning Territorians to stay off flooded roads as heavy rain was expected across the Barkly and Central regions this weekend.

Police called for all non-essential travel to be delayed and to stay out of flooded causeways in the region after rain events earlier in the month saw emergency services respond to reports of missing people, bogged motorists and near-drownings.

“Incidents like these are a reminder to everyone to avoid flooded waterways,” said watch commander Andrew Heath.