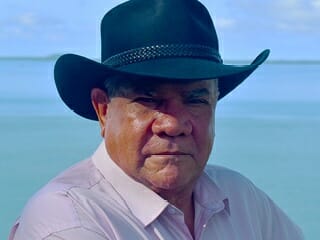 The CLP Opposition will move a motion to remove Mick Dodson from his role as Treaty Commissioner during next month’s parliamentary sittings if he doesn’t resign before then, its spokeswoman for Women said today.

Mr Dodson remains in the $290,000 a year role and told the government yesterday he was taking two weeks’ sick leave despite being informed by Chief Minister Michael Gunner in a letter last week that he no longer has confidence in Mr Dodson to hold the job following allegations of verbal abuse against women.

“The Chief Minister says he has lost confidence in the Treaty Commissioner, but doesn’t have the fortitude to demand he step down,” she said.

“For the Chief Minister to hide behind an ‘employment law situation’ excuse not to press the NT Treaty Commissioner to resign, is downright disrespectful to every woman in the Territory.

“It’s disappointing we have a Treaty Commissioner embroiled in allegations of aggressive behaviour towards women, taking sick leave on National Sorry Day and the beginning of Reconciliation Week, while continuing to collect his $290,000 salary.”

The government has finalised an investigation into allegations Mr Dodson called a woman a “slut” and threatened to “knock her f**king lights out” at a football match in Darwin earlier this year but has refused to release the findings of that report.

It is also unclear when exactly Mr Gunner was made aware of the allegations.

Meanwhile, Sky News reported that two other women have come forward to say Mr Dodson had used insulting language towards them during a professional event in Alice Springs in 2018.

Mr Dodson’s lawyer David Da Silva has not responded to questions. He has neither confirmed nor denied the allegations.

He previously said Mr Dodson was suffering from PTSD and needed to be left alone while keeping his job.

But Mr Gunner’s staff told Sky News they had expected him to resign after Mr Gunner sent a letter stating that he had lost confidence in his ability to do the job.

Mr Gunner has this week rejected committing to removing Mr Dodson through a two-thirds vote in Parliament, which is the only way to officially terminate Mr Dodson from the role, and instead said he “hoped” it could be resolved sooner than next month.

Ms Boothby said she did not believe Mr Gunner was showing leadership.

“We are preparing a motion – to move on urgency in the June sittings – to dismiss Commissioner Dodson,” she said.