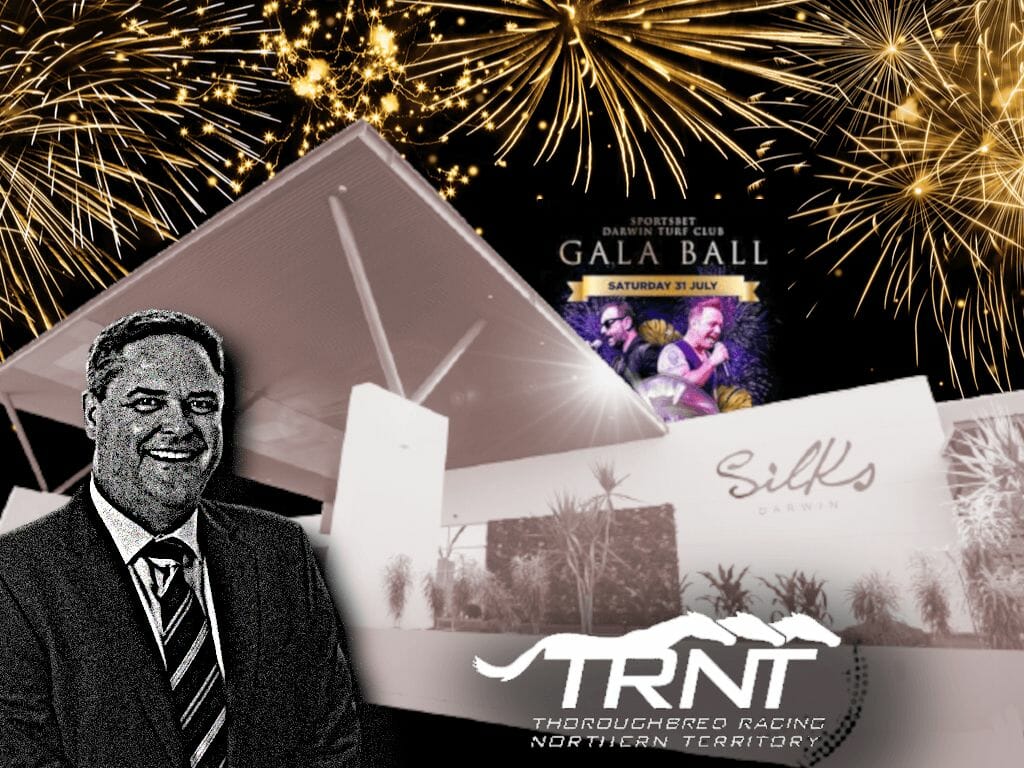 Darwin Turf Club chairman Brett Dixon advised his board to seek money from Thoroughbred Racing NT – another taxpayer-funded body he is the chair of – to cover an increase in costs of the Silks lounge, a project his construction company was carrying out works on, internal Turf Club documents obtained by the NT Independent reveal.

The perceived conflict of interest has raised questions about what oversights are in place for the distribution of taxpayer money to Thoroughbred Racing NT (TRNT) and ultimately the Darwin Turf Club.

Minutes of the October 2019 board meeting also show the Turf Club was in financial trouble before receiving the $12 million taxpayer grant to build the controversial grandstand project, including racking up a staggering $250,000 loss on the 2019 “gala ball”, and relying on government bail-outs to keep the club afloat, including a $1 million one-off payment in 2018 to shore up its finances.

This was despite an estimated $35 million of taxpayer money pumped into the peak body representing the NT’s horse racing clubs over three years.

Mr Dixon listed on his Turf Club disclosure of interests that his company Jaytex had carried out works on the Silks lounge, but the records show he continued to engage in discussions with the board in his role as chair about costs and other matters relating to the project as they arose.

At a board meeting on November 12, 2019, the Turf Club’s then chief financial officer raised the issue of the Silks lounge project running $200,000 over budget, suggesting both the Alice Springs Turf Club (ASTC) and the Darwin Turf Club (DTC) needed to find the funds to cover the shortfall.

“The Chairman [Mr Dixon] requested that it be documented so that ASTC can be notified first of all,” the minutes of the board meeting state.

“The Chairman felt that help can be sought from TRNT.”

Mr Dixon is also the chair of TRNT, the body that distributes taxpayer cash to the Territory’s local horse racing clubs.

He did not respond to questions about whether he believes chairing the TRNT and the DTC creates a conflict of interest, or whether it was appropriate to be advising one board he chairs to approach another board he chairs to seek funds for cost overruns of a project his private construction company was involved in.

It is unclear if TRNT contributed money to the cost overruns of the Silks project or if Jaytex received that money.

He did not respond to phone calls.

How much money do NT taxpayers give the racing industry?

The amount of money TRNT receives from the government is difficult to ascertain.

In early 2019, the ABC estimated that in the three years to June 2019 – under the Gunner Government – the organisation received roughly $35 million.

In promotional material for the 2019 Darwin Cup Carnival, Racing Minister Natasha Fyles said that in 2017-18, the Gunner Government entered into a five-year funding partnership with the racing industry, however, there is no record of the government publicly announcing that.

The total amount of taxpayer cash awarded as part of the undisclosed funding deal has also never been publicly disclosed.

Ms Fyles and Chief Minister Michael Gunner’s senior advisors declined to provide a figure when asked by the NT Independent.

The government has previously defended taxpayer money going to the Turf Club on the basis that it creates jobs and tourism opportunities.

Despite what would be record amounts of taxpayer cash given to TRNT, and in turn the Darwin Turf Club, the DTC continued to struggle financially until this year, seeking a $1 million taxpayer bail out in 2018 to shore up its financial position, according to a 2019 NT Liquor Commission document reported by the ABC.

Board meeting minutes show the club’s financial position was improved after obtaining the $12 million government grant for the grandstand, but that it continued to lose money on the gala ball and that attendance at Cup Carnival events had been dwindling for years.

The Gunner Government guaranteed a $3.5 million loan to the Turf Club in 2018, despite Treasury officials’ warning that due diligence and a risk assessment had not been undertaken on the project.

Mr Dixon’s company Jaytex did works on that project – which may have cost up to $6.8 million – and displays the finished building on its website. It is unclear what process was undertaken before Jaytex was given the Silks lounge works contract.

The ABC previously reported that government records obtained through Freedom of Information laws last year showed then-attorney general Natasha Fyles had received advice from her department in 2018 that a risk analysis was needed on the Silks project before the government could approve the extension of the loan guarantee and that there was “limited information available regarding the construction of the Silks Club”.

But the department said the facility “may be of benefit to the Territory” by creating jobs and tourism opportunities.

Ms Fyles then wrote to then-treasurer Nicole Manison to request she approve the loan guarantee extension which Ms Manison did in July 2019.

The department later changed that response after consultation with the Department of Attorney General, the FOI showed.

Gala ball lost $250k in 2019, Turf Club tried to get Mindil Casino to take it over, while maintaining control of ‘entertainment’

Former DTC chief financial officer Barry Lloyd told the board at the November 2019 meeting that the losses on the gala ball “had a big impact” on the club’s budget.

“The CEO [Keith Stacy] advised the board of the results of his meeting with Mindil Beach Casino Resort. The Chairman queried how much detail was discussed during the meeting about the nature of a potential agreement. Eg, if Mindil Beach have control of it then they may not be a sponsor,” the minutes state.

“It was noted that the Casino receive more benefit than we do from the Gala Ball.

“Discussion then moved to the total financial loss we incurred due to the Gala Ball which was around $250k.

“The Chairman felt that entertainment should have to be endorsed by the DTC.

“Discussion then moved to the fact that a significant amount of money was invested in entertainment this year and that will set the benchmark. The Board commented on the quality of performances from Vanessa Amorosi and Tjuki Mala Dancers.”

The NT News reported last month that this year’s gala ball will be held at Little Mindil, “due to sheer weight of numbers and a flood of locals wanting to buy tickets”. The article also claimed this year’s event “sold out in record time”.

“The interstate response has been similar to the heady days when we had 3000 people attending,” Mr Dixon told the newspaper. “The DTC site holds 1400 and this sold out three weeks ago.

“This is the first time ever that a Darwin Cup ball has been sold out in May.

“With hundreds of locals on the waiting list we contacted SkyCity, which still owns the block. We asked if we could hire Little Mindil from them for the night and thankfully the answer was yes.”

Mr Dixon did not mention that numbers had been trending down and that the Turf Club had been in talks with the casino to take over the event.

It’s unclear if a deal has been struck for the casino to hold the event on an annual basis.

Brett Dixon was reappointed to TRNT in February of this year in an appointment that was ultimately approved by Ms Fyles. He then appointed two other members to the board.

Neither Mr Dixon nor Ms Fyles responded to questions.

The deputy chair of TRNT is former Labor minister Syd Stirling, who established the TRNT while he was the responsible minister.

Ms Fyles relinquished her Darwin Turf Club honorary membership last year, but had a spokesperson explain that it was not because of the government’s controversial support of the Turf Club.

She did not respond to a question yesterday about whether she held concerns about the management of the Turf Club or TRNT or how the organisations were managing taxpayer money.

Mr Dixon was part of a group of four local businessmen who donated a total of $100,000 to the NT Labor Party in the lead up to the 2016 general election through the businesses Berrimah North Developments and Darwin Corporate Park.