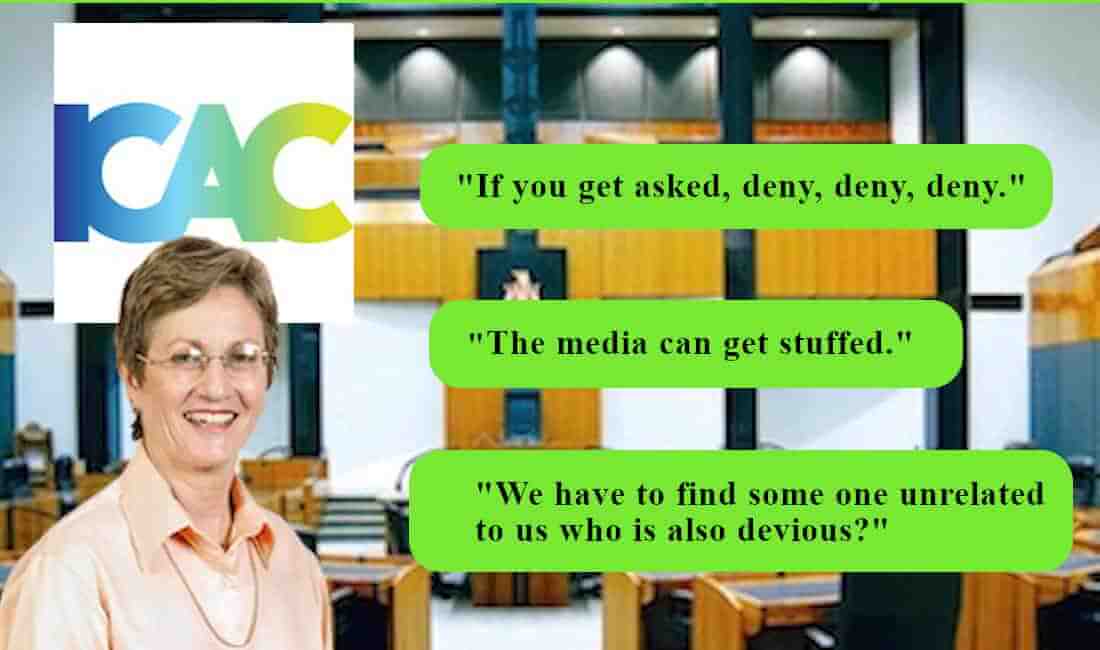 Speaker Kezia Purick was working with at least one other unnamed Member of Parliament on her plot to thwart a third political party from entering the NT political landscape, the Independent Commissioner Against Corruption’s report into her conduct shows.

The revelations have cast a shadow of suspicion over NT Parliament House after the report was tabled Tuesday morning, with demands made for the unnamed MLA to identify themselves.

Territory Alliance deputy leader Robyn Lambley told Parliament that “there’s a lot of dirt on a lot of people in this room”.

“I think the ICAC inquiry here has touched the edge of a much bigger problem within the Northern Territory Parliament,” she said. “There were people named in the report, their identity has been concealed – they’ve been referred to by acronyms.

“One of them is one of us, one of the people sitting in this room here today. Who has potentially colluded with the former speaker Kezia Purick?

Ms Purick, who resigned as speaker on Tuesday, is facing the prospect of criminal charges after being found by the ICAC to have engaged in “corrupt conduct” resulting from her interference in the establishment of a political party called the North Australia Party that Terry Mills was considering establishing in 2018.

The ICAC’s report found Ms Purick lied to the commissioner on three occasions, failed to report breaches of the ICAC Act as required and engaged in “anti-democratic” behavior by using the resources of her taxpayer-funded office to further her own political goals.

Texts and encrypted app messages retrieved from Ms Purick’s phone show she had been working with an unnamed male MLA as the fight escalated to keep the two-party system intact and block a new party from disrupting the Territory’s establishment.

“We been through deeper bogs”: Purick to unidentified MLA

On October 26, 2018, at 10 am, Ms Purick wrote to the MLA, known in the report as “AB” (not their real initials), after Mr Mills had appeared on Mix 104.9 to suggest the CLP, Labor and the Speaker were working together to block a coalition of independent MLAs from assuming the role of official Opposition.

“You go for mills I will seek legal advice he has just accused me of bias and collusion,” she wrote to the MLA after Mr Mills’ comments aired.

More messages ensued on that day sent from Ms Purick to the unidentified MLA, the ICAC report stated, but did not disclose them. Another was sent at 9:46 pm.

“By next Tuesday we will have some advice for internal use plus you me and others work on a strategy to shut out and down mills,” a text from Ms Purick reads. “For starter no talking to [Sky News reporter] Matt Cunningham. Hang in there, we been through deeper bogs X.”

It’s understood that “advice” related to legal advice the Speaker and Clerk Michael Tatham had requested concerning whether a coalition of independent MLAs could from official Opposition.

Questions were also being raised at the time about how a party of two were granted Opposition status despite being outnumbered by independents.

The Speaker’s office is required by convention to remain impartial in partisan politics but the ICAC found Ms Purick “intervened in the attempted creation of a political party by other MLAs, contrary to her obligations of impartiality as Speaker”.

“We have to find some one unrelated to us who is also devious”: Purick to staffer Martine Smith

According to the ICAC report, Ms Purick sent an encrypted app message to the unnamed MLA on November 1, 2018, suggesting she had been working on shutting the party down before it started.

“I have been doing some research and …North Australia Party registered as a business name already in QLD but not as a party,” she wrote to the MLA. “If the QLD do register as a party, can’t register here. Need to do bit more work.”

Messages between Ms Purick and Ms Smith show the pair were working together to thwart the establishment of the new party, with Ms Smith suggesting the business name had not been registered in the NT and that “if someone wanted to they could pip Mills and Lambley at the post and register the name today”.

“Ooo you be the clever one, I could get some one to register…”

“That is exactly what I was thinking…ha ha,” Ms Smith responded.

“Ok can y U get me some forms to register a business name please?” Ms Purick wrote.

Later, while sitting in the Speaker’s chair in Parliament Ms Purick wrote to Ms Smith: “We have to find some one unrelated to us who is also devious?”, referencing registering the party name in the NT before Mr Mills could.

By November 8, Ms Purick instructed her MLA confidante to ignore reporters’ questions because they were “onto me” and that if he were to be asked about the plan he should “deny, deny, deny”.

“I understand there has been some media release my (sic) office and Martine,” she wrote. “I have no intention of removing Martine and the media can go get stuffed.”

The ICAC found Ms Purick attempted to mislead the press and the public with no regard to facts.

“The degree to which Ms Purick was prepared to mislead was carefully calculated,” commissioner Ken Fleming wrote in the report.

“I find from that evidence that Ms Purick had made an assessment of how much the press knew,” he said. “She then crafted the message around what the press knew, not the true facts, and she blamed Ms Smith for the episode.”

Another player, listed in the report as “CD”, gave Ms Purick PR advice on how to handle the situation after the story broke when “she” attended to Ms Purick’s home on Tuesday November 13 to collect Ms Smith as both women were drinking and Ms Smith had “drunk too much” by 3:30 pm to drive home, the report stated.

“CD” offered lines Ms Purick could use and assured her “it would all blow over”.

Those lines were used in an email to MLAs and media statement three days later in which Ms Purick misled the public and Parliament by stating that Ms Smith had acted on her own and that “at no time did I give direction”.

On November 27, 2018 Ms Purick apologized to Parliament for her staffer’s actions in attempting to interfere, stating she had “always tried to act in good faith and I trust you will allow me to continue to do so”.

She also said Ms Smith had been reprimanded, but the ICAC report found no evidence of this.

Mr Fleming stated he was “left in no doubt” that Ms Purick used her “power and influence” over Ms Smith to “achieve her ends”.

“The power imbalance between the Speaker and her executive officer is patently evident,” he wrote.

Lawyers for Ms Purick stated in the report that they felt the ICAC’s findings were “so far short of corrupt conduct that it is doubtful whether it could even be regarded as improper conduct under the ICAC Act”.

“The activities … happened in the heat of political battle between Mr Mills and Ms Purick as Speaker,” they wrote. “At worst, the conduct under investigation may be regarded as the pursuit of a political opportunity (point scoring) by Ms Purick…”

The ICAC has referred the matter to the Director of Public Prosecutions to determine if charges should be laid. The report was officially made public Tuesday morning.

Mr Fleming was also scathing of the Legislative Assembly in his report, finding that there was a “lack of guidance around the conduct and ethical standards expected of members’ personal staff” and that Parliament did not use its powers to investigate the conduct of members despite “widespread and persistent disquiet”.

He further found MLAs and their staff had communicated sensitive information using encrypted messaging apps which he said could have a “considerable security impact”. And he found that there was a lack of transparency around how electorate allowances were used, making it difficult to determine whether the expenditure was “in line with community expectations”.