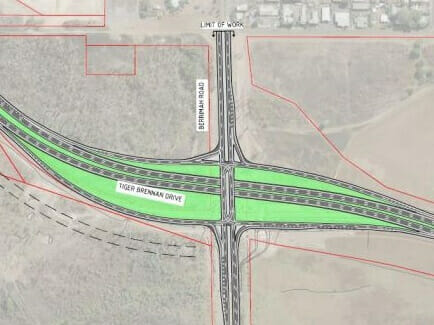 The proposed Tiger Brennan Dr – Berrimah Rd overpass project has nearly doubled in cost, ballooning from $60 million to $110 million, Infrastructure Minister Eva Lawler said on Monday, suggesting increased costs of fuel and steel are to blame and that future cost blow-outs on the project are “absolutely possible”.

The overpass project is jointly funded by the NT and Commonwealth governments, with each side now having to throw in an extra $25 million, Ms Lawler told ABC radio Monday morning.

“So, we will continue to work with Sitzler, our contractor, the builder, but it is a substantial extra cost for the overpass,” she said.

“So, the Northern Territory Government will have to find the extra $25 million as well. So it is it is a complex build and the cost of civil contracts are going up.”

The Gunner Government awarded the tender to Sitzler last August to complete works on the overpass to “improve road safety outcomes” at the busy intersection.

Ms Lawler was at pains to explain how the project could nearly double in costs, stating that Sitzler was “refining the costs” and that the “design work” and detours during construction were a few of the reasons for the cost blow-out.

She said other contractors who had bid on the project would not be angry about the cost blow-out because the original cost of $61.5 million was just a “broad ballpark figure”.

“We identified obviously, that this is one of the most busiest one of our most dangerous intersections and so jumped on that funding to say, well, this is a great initiative and but as I said it was a very broad figure. That work has now been done by Sitzler. And we need to do, those costs have increased and we need to build that intersection. So we’ll continue to work hard to do that.”

When directly asked why the costs had blown out by so much, Ms Lawler said, “you’d probably have to speak to some of the engineers and design people around that”.

“But the overpass will come down from Berrimah Road down to East Arm … it will be around the fuel that is needed to build the road up. There is substantial cost probably across every aspect of it,” she said.

She added steel and concrete have also increased in costs.

“So, all general costs have increased across that project,” she said. “So, the briefings I’ve had is there is a general increased costs around various aspects of the project.

“We are seeing a huge increase in the cost of civil [works] at the moment. I mean, the briefings I’ve had, steel increased 30 per cent between December and February this year. So, this is the reality of our environment at the moment.”

Ms Lalwer said she was aware of the increased costs for two or three months and said the project would have been “shelved” had it not been for the Federal Government giving another $25 million, but it was unclear where the NT Government would get the extra $25 million it needs.

She could not say when the actual works would commence and that it was “absolutely possible” that further cost blow-outs could occur on the project.

“We hope there is no further increases, but we absolutely can’t rule that out,” she said.