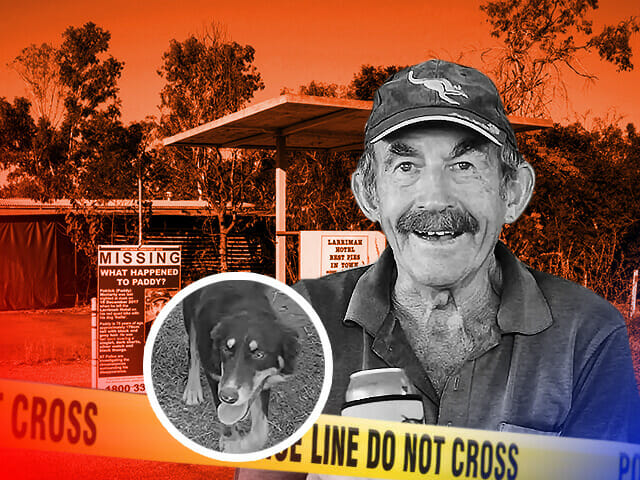 By KYLIE STEVENSON and CAROLINE GRAHAM

A long-standing feud between missing man Paddy Moriarty and his neighbour was likely the cause of his disappearance, the Northern Territory coroner concluded at an inquest today.

Mr Moriarty, 70, and his dog Kellie went missing from the tiny town of Larrimah, 500km south of Darwin, on December 16, 2017. Despite an extensive search, his body has not been found.

Coroner Greg Cavanagh confirmed police suspicions that Mr Moriarty was dead and had likely been the victim of foul play.

“In my opinion, Paddy and his dog were killed in the context of and likely due to the ongoing feud he had with his nearest neighbour,” Mr Cavanagh said.

Yesterday, the inquest heard eight tapes covertly recorded by police in the home of Owen Laurie, now in his 70s, in the months following Mr Moriarty’s disappearance.

Mr Laurie worked for long-time Larrimah resident and pie shop owner Fran Hodgetts as a caretaker and gardener, and the pair lived across the road from Mr Moriarty.

On one of the tapes a man’s voice says: “Fucking killed Paddy, hit him on the head. Smacked him on the fucking nostrils with my claw hammer.”

In another, the person strums a guitar and sings: “I killerated old Paddy … I struck him on the fucking head and killerated the bastard … basherated him”.

Mr Laurie told the inquest that the voice in the tapes wasn’t his and then exercised his right against self-incrimination and remained silent in response to the recordings.

The inquest heard Ms Hodgetts’ evidence via videolink from Melbourne, where she now lives.

She revealed a complicated narrative in which Mr Moriarty had allegedly repeatedly poisoned her plants, and said the pair had gone through a mediation process in which they agreed to smile at one another and wave if the other waved first, but limit interactions to necessity.

She was also asked to comment on allegations made by Wayne Ian Ledwidge, a labourer of Pine Creek, who appeared earlier in the inquest.

Mr Ledwidge claimed that in late 2017 he overheard a conversation between his friend Brian Roberts and Ms Hodgetts, in which Ms Hodgetts offered him $10,000 to “get rid” of someone who had been bothering her.

Ms Hodgetts denied knowing Mr Roberts, who is now deceased, and said she had no knowledge of what had happened to Mr Moriarty.

“I swear on my mother and father’s grave, I don’t know him and I never said that.

Michael Pangquee, a truck driver from Darwin, told the inquest he had several conversations with a man named “Richard” about Mr Moriarty.

Mr Pangquee told the court he met Richard through work in 2018 and over the course of a number of evenings drinking, Richard told him he was with another man when Mr Moriarty and his dog were shot and killed, then the pair had a drink over the bodies and buried them.

“Richard” claimed he had known Mr Moriarty when he went missing in 2017, and gave evidence in the first half of the inquest in 2018 that the pair had been friends.

Officer in charge of the case Detective Sergeant Allen said significant police resources had been devoted to investigating both Mr Pangquee’s and Mr Ledwidge’s allegations, but there was little evidence to support either scenario.

In his findings, Mr Cavanagh gave a brief history of Mr Moriarty’s background, saying he had been born in Limerick, Ireland, in 1947, moved to Australia when he was 18, and had no known relatives.

He said Mr Moriarty moved to Larrimah from Daly Waters in 2008, and on the night in question had ridden his quad bike home from the Larrimah Hotel, where he was a regular fixture, put his wallet on the table, his hat in the usual place, the dog food in the dog bowl and got his own meal out of the freezer. He then went outside with the dog.

“There is no evidence as to where he went, however, it my view it’s likely that the new plants at Fran’s place were of some attraction to him,” Mr Cavanagh said.

The Coroners Act states Mr Cavanagh is not permitted to include a finding or comment that a person may be guilty of an offence.

“However I will refer this investigation to the Commissioner of Police and the DPP,” he said. “For I believe offences may well have been committed in connection with the death of Patrick Joseph Moriarty.”

Following the inquest, Detective Sergeant Matt Allen said it was a once-in-a-generation case.

“Murder investigations are challenging, particularly without a body,” he said. “The case doesn’t get closed until it is solved. We need to find Paddy.”

He reminded the public that the $250,000 reward still stands.