Mr Chalker fronted Budget Estimates hearings with Police Minister Kate Worden Monday morning, and was asked about what he planned to do to turn around support for him within the force, after the NT Independent revealed the NT Police Association’s Katherine region, the Berrimah region and the North Eastern region have all joined their colleagues in six other branches over the last couple of weeks to call for the vote of no confidence, bringing the total to nine out of 12 regions.

The total number of police members who voted in those motions from the floor could be at least 450, out of about 1660 sworn members.

Sources have told the NT Independent the lack of confidence in Mr Chalker stems from the Constable Zach Rolfe murder charge and subsequent Supreme Court trial –  which the Police Commissioner would only refer to as the “criminal trial” – but there is also deep unhappiness at the increased attrition rate, a view that disciplinary action is being used for frivolous matters and to prevent members transferring to other jurisdictions, as well as a belief the executive enforce standards on the rank-and-file that they do not uphold themselves. 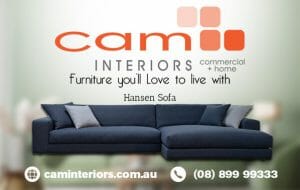 A month ago Mr Chalker issued a remarkable public statement, informing Territorians he was still the Commissioner of Police and the CEO of Fire and Emergency Services after radio station Mix 104.9 reported an incorrect “unconfirmed report” he had stood down.

Ms Worden showed she had read the NT Independent articles – despite Chief Minister Natasha Fyles having said the government did not acknowledge the paper – and would not take a question about the vote of no confidence from Opposition Leader Lia Finocchiaro, saying it was not a budget related issue.

Upon further prompting by independent MLA for Araluen Robyn Lambley, she did respond to the question of whether the rank-and-file had confidence in the Police Commissioner, but would not state specifically what issues had been raised by the NTPA or members about Mr Chalker’s leadership.

“And we’ve all read those media reports. My role as Minister, incoming Minister, is to ensure that we are looking at all of the possibilities…to make sure that members feel supported, that they have a voice, and that we can work together to improve the things that they bring up with me,” she said.

“So, as I indicated, I’ll keep talking to regulate the NTPA about those issues.”

Mr Chalker was asked by Ms Lambley how he could improve his standing with rank-and-file officers.

“It is an unfortunate reality that the Commissioner of Police has to, and it does strike a great personal cost, maintain their duty to ensure that I respect all processes that are in place,” he said. 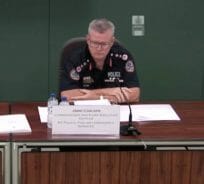 “It is unfortunate that there is so much rumour and rhetoric out there that I simply am unable to come out and correct that record out of respect for processes. That is internal processes. These are not processes that I have established. They are long standing processes that broadly relates to discipline.

“The criminal trial was very prominent. Again, under much criticism, but following the legal advice I received, I said all that I could say. It is very difficult and frustrating to not be able to correct the record.

“I will candidly say to you, it has been very heart-breaking for me to know that many people are operating under misguided beliefs and I know a number of mistruths that are out there.

“But I know there are people who’ve been very emotionally impacted by this and again, they read a lot of the rhetoric that’s out there, and as I’m picking up, you’ve all been reading the media…you would know that some of the commentary has been nothing short of disgusting, has not been factual, and has been deliberately targeted to cause harm.”

The NT Independent published an investigative series after the Constable Rolfe trial, based on the diary notes of Mr Chalker’s own investigators into the death of Kumanjayi Walker, who wrote they were concerned about the speed in which the investigation was leading to a murder charge, the early involvement of the Director of Public Prosecutions, and the fact the charge was laid based on an un-finished brief of evidence.

Constable Rolfe was charged four days after Mr Walker’s death, and despite Mr Chalker telling the media in the week after the verdict he had no involvement in the process to charge, there were five instances of documented evidence in the diary notes, showing the top cop’s involvement across all four days following the Yuendumu shooting.

At Estimates, Mr Chalker went on to say if the vote of no confidence proceeded to the NTPA annual conference in August, then it was up to members to consider, and that would be the appropriate time for him to “have a conversation with people” and could “resolve the truth”.

He also spoke about the legislation that covered internal disciplinary matters but did not specifically say what processes he was referring to that prevented him from discussing all of his members’ concerns about his leadership.

An ICAC investigation is currently underway into the four days leading up to Constable Rolfe being charged and a coronial inquest is scheduled for September into the shooting death of Kumanjayi Walker that will include reviews of police procedures and policies.

Constable Rolfe was acquitted of murder and two alternative charges for the death of Mr Walker on March 11, after a unanimous not guilty verdict in the Supreme Court.

However, the coroner’s report would not include any illegal activity that transpired, which under legislation requires the coroner to raise that with the Police Commissioner and the Director of Public Prosecutions – the two bodies that played key roles in the decision to charge.

Mr Chalker could also have been referring to the police executive’s accusation against Constable Rolfe of 25 serious breaches of discipline which could result in his sacking, which the top brass informed the union of hours after Constable Rolfe was cleared of murder.

Ms Lambley then told Mr Chalker perception was very powerful, and that it did not really matter what the truth was, and said she felt obligated to ask if his position was untenable.

“Again, I know a lot of the truth, certainly in the domain of what I understand is untruths that are out in the public domain,” he responded.

“And I again can’t comment on those things because there’s processes that will do that. I also note that there is a large amount of support that are received each and every day across this agency but also across this community.

“So it’s disappointing that natural justice doesn’t appear to be afforded to all people.”