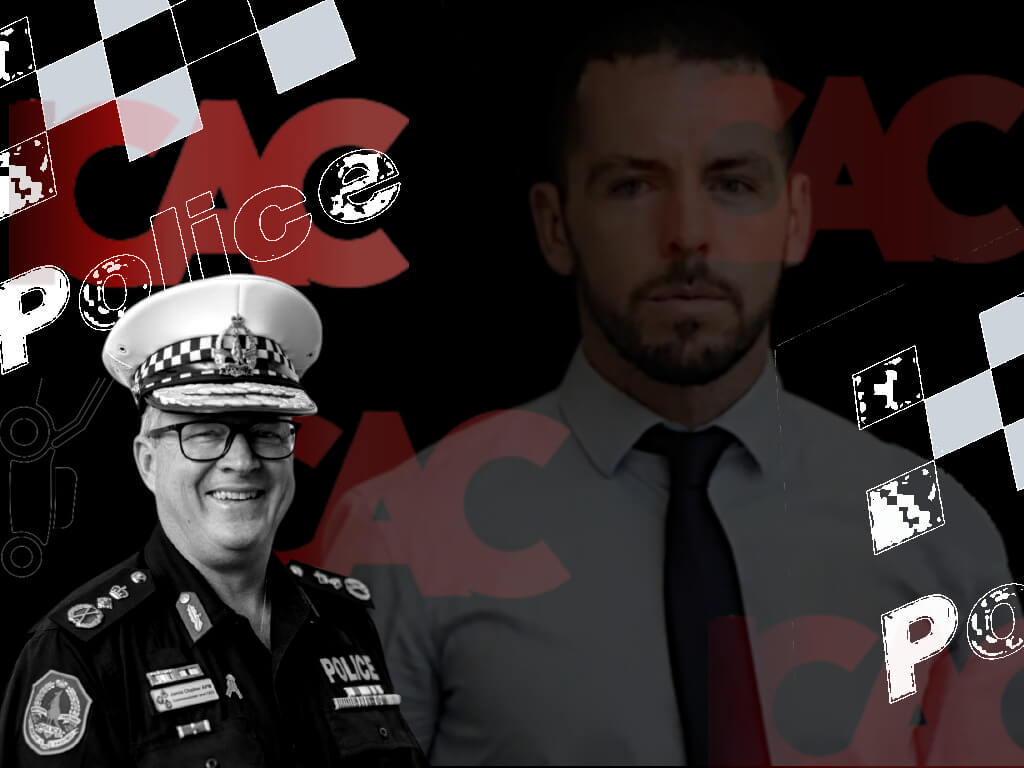 Police Commissioner Jamie Chalker personally referred the 2019 shooting death of Kumanjayi Walker by Constable Zach Rolfe to the Territory’s anti-corruption body for what he described as “suspected improper conduct” less than 48 hours after the incident, before any charges were filed and while facts were still being collected, according to the ICAC Inspector’s annual report.

The disclosure appears to contradict claims Mr Chalker made last week that he was “shocked” when the charges were laid against Constable Rolfe and that he had operated “at arm’s length” from the police investigation.

Mr Chalker referred the matter at an unspecified time on Monday, November 11, 2019, less than two days after the November 9 shooting incident, and amid a push by the police brass to pursue charges despite concerns by detectives that the matter was being rushed before all evidence “was available to make a considered opinion”.

Mr Chalker’s referral was made pursuant to Section 22(5)(b) of the ICAC Act, which mandates public officials to report suspected improper conduct or misconduct. However, ICAC reporting guidelines for public servants specifically state that there must be a “reasonable” suspicion backed up with “one fact or more upon which your suspicion is based”.

“You need not be convinced about the behaviour. At the other end of the scale, your belief must be more than speculation on your part,” the guidelines state.

Mr Chalker did not respond to questions about what evidence he was relying on to refer Constable Rolfe for investigation to the anti-corruption commissioner in 2019 while the police investigation was still collecting facts.

On the same day Mr Chalker referred Mr Rolfe to the ICAC, unidentified people in the police executive were pressuring detectives to show body worn video footage of the incident to the Director of Public Prosecutions for possible charges, according to diary notes by detectives investigating the shooting.

The plan to show the DPP the footage was finalised by 7:15am on Monday, November 11, to seek advice about Constable Rolfe’s “possible criminal culpability”.

At noon, the footage was shown to then-DPP Jack Karczewski, and reportedly assistant DPP Matthew Nathan, who after a lengthy meeting recommended to three investigating officers, including an assistant commissioner, that a murder charge be laid against Constable Rolfe.

The DPP then reportedly asked to receive a brief of evidence by COB Wednesday, which would have involved Constable Rolfe being interviewed, which had still not occurred by that point.

It remains unclear at what point that day Mr Chalker referred Constable Rolfe to the ICAC.

The speed at which the video footage was shown to, and the involvement of, the DPP had alarmed investigating officers, with at least four objecting to the DPP’s early involvement, records publicly released after the murder trial that exonerated Constable Rolfe show.

Detective Snr Sgt Mark Grieve wrote in his diary that he did not agree with pressure to arrest and interview Constable Rolfe that was determined on the Monday.

“Member disagreed with this direction due to huge amount of evidence / information yet to be reviewed,” he wrote.

“Reporting officer advised that it was extremely concerning that crucial elements of an extremely serious criminal/coronial investigation were being hastened for no discerning justifiable reason.

“Investigators on scene do not agree with course of action, both arrest element and charge.”

However, on the Monday afternoon, presumably after Mr Chalker had referred Constable Rolfe to the ICAC for improper conduct – and two days before formal charges – all investigators were told to sign a confidentiality agreement.

Last Wednesday, Mr Chalker told reporters that he was “as shocked as anyone” about Constable Rolfe being charged.

“I’ve remained at arms-length from the investigation for the whole period of time,” he said.

“I was as shocked as anybody related to the fact of receiving that advice and of course had to immediately move into a mode of ensuring the safety of people involved.”

He did not respond to questions.

According to ICAC Inspector Bruce McClintock’s 2020 annual report, Mr Chalker made the referral “to the ICAC as suspected improper conduct…”

He added that “at about this time [of the arrest], the ICAC received a request from local aboriginal elders who sought independent oversight of the police investigation”.

Mr McClintock explains in his report then-ICAC Ken Fleming attended a rally in Alice Springs the day after Constable Rolfe was arrested and charged in which he made comments about “corrupt conduct” that caused six complaints to be filed with the Office of the ICAC, that led Mr McClintock to determine that due to the “possible perception of bias on the part of the [ICAC] Commissioner, he should not be involved in the ICAC’s continuing oversight of the police investigation”.

He stated in a letter to Chief Minister Michael Gunner, dated December 2, 2019, that the OICAC’s investigation and oversight into the incident would be led by then-ICAC general manager Matthew Grant, however it appears the OICAC did not pursue the matter.

Mr Grant has since taken a job as chief operating officer with NT Police, Fire and Emergency Services.

The news of Mr Grant’s new role last December, which was initially billed as a ‘six-month secondment’, came as media reported the NT Police’s Special References Unit was investigating the Office of the ICAC for “allegations of misconduct” relating to “an historical matter involving the Office of the ICAC”, but which purportedly did not involve Mr Grant.

Current ICAC Michael Riches said earlier this month that he was now considering an investigation into the processes that led to the arrest and murder charge against Constable Rolfe amid allegations of political interference.

He said in a statement that he was “not aware of any investigative steps taken by the Office of the ICAC” between November 15, 2019 and the day he started in the role last July, in connection to the Yuendumu shooting and Mr Rolfe’s charges.

It is unclear why the Office of the ICAC under the leadership of Mr Grant did not provide oversight of the Rolfe investigation as described by Mr McClintock in his letter to the Chief Minister, and as requested by Indigenous members of the Yuendumu community.