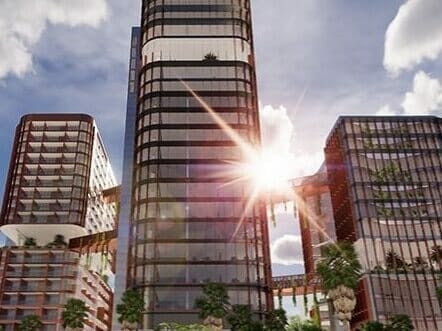 Construction of the $430 million Charles Darwin University city campus will go ahead, despite concerns around the economic impacts of the coronavirus pandemic and how that may affect the number of international students enrolling in the university, according to the university’s vice chancellor.

“There’s no correlation between that project not proceeding and what else we would have to accommodate, because that project is about getting us ready in four years time,” CDU vice chancellor Professor Simon Maddocks told Mix 1049.

National Tertiary Education Union NT President Darius Pfitzner earlier slammed the campus project continuing, suggesting that amount of money could be better spent in other parts of the Territory’s economy.

But Prof Maddocks said that was not possible.

“All I can say is that the money being put in this project is coming from the Commonwealth Government,” he said. “Actually, their [Commonwealth] direct commitment in the budget in the end of last year was through the North Australian Infrastructure Fund. That money can only be used on this capital development on that side.

“It’s not money that we can re-purpose for any other activity… I simply don’t have the capacity to re-purpose that.”

The NT Education Union had earlier suggested student enrollment would decline for at least a year due to coronavirus travel restrictions.

But Prof Maddocks claimed that international student applications for the second semester are already higher than last year, notwithstanding the COVID-19 restrictions.

But when asked for the figures, he said he didn’t have totals.

Prof Maddocks also said that CDU is currently working with the federal government and other universities over how they can accommodate students while global restrictions remain enforced.

“We’re not expecting students into Darwin for that new campus until 2024,” he said. “If we’re still suffering from coronavirus consequences then, we’ve got bigger issues to be worried about.”

The CDU city campus project was signed in December 2018.

The Northern Territory Government also has allocated $100 million to various City Deal projects, which is a partnership between the three tiers of government.

Analysis by Deloitte Access Economics has found that the inner-city campus could increase economic output in the Darwin region by more than $250 million during the next 15 years and provide an extra 100 jobs in Darwin.