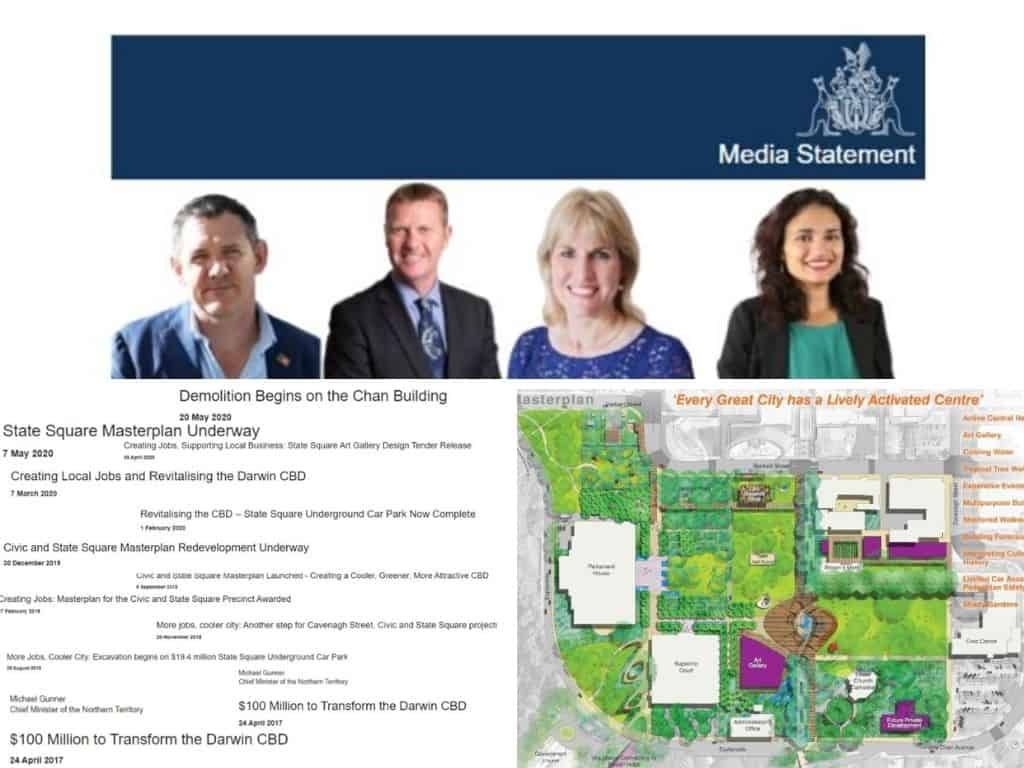 The Gunner Government has only now started work on developing a business case for its flagship State Square redevelopment project – three years after first announcing it and more than a year after commencing works – the NT Independent can reveal.

Government documents show the contract to produce the business case for the $100 million project was awarded to Deloitte last week for $265,000 through a private select process rather than through a public process.

The consultancy will also include creating a business case for the proposed $50 million art gallery at State Square, which already went to tender in April.

Before developing a business case for its “critical” project, the government hired a company to demolish the Chan building for $1.5 million, built a $20 million underground carpark, paid for a $500,000 “masterplan”, and awarded tenders to contractors for a variety of associated works since 2018.

The Gunner Government has been spruiking the project as “critical” for the City of Darwin moving forward and have issued at least six press releases about small advances on the project over the last year with the same wording.

“The State Square overhaul is a critical part of the historic $200 million City Deal …” stated every press release about the development since September 2019.

The statements, which were mostly about other tenders being awarded, also included the same line about the necessity of the State Square precinct being “revitalised to create cool, green spaces for the whole community”.

Despite recognising the minutiae of every step of the redevelopment in press releases, the government did not issue a press release about the business plan being put to tender in April, or about it being awarded to Deloitte last week.

According to one statement, the masterplan for the redevelopment project was awarded to Victoria-based landscape architecture firm TCL and completed in September 2019. Other government documents show the masterplan cost $470,000.

“I would have thought a business case should inform whether or not to go ahead with the redevelopment at all, not be tendered for after works begin,” she said.

Territory Alliance leader Terry Mills said it was “going from bad to mad” to tear down the Chan building before a business case was made.

“What will remain is a scar (on our beautiful city) to remind us of the injury the Gunner Government has inflicted to the face of our CBD and the Territory,” he said.

The government did not respond to the NT Independent’s questions, including why a business plan wasn’t developed before the works were well underway.

The reasons for seeking only selected bidders for the business case contract and not going through a public tendering process were not disclosed.

The State Square redevelopment includes other smaller projects around the Darwin CBD, with the $200 million Darwin City Deal pricetag being split between the NT Government and the Federal Government. The City of Darwin is expected to provide land but not make a financial contribution.

The federal contribution will go mostly towards developing the site for the proposed new Charles Darwin University campus in the Darwin CBD.

Editor’s note: This article was updated to clarify that the City Deal is valued at $200 million, not the State Square project itself, which is estimated at around $100 million.