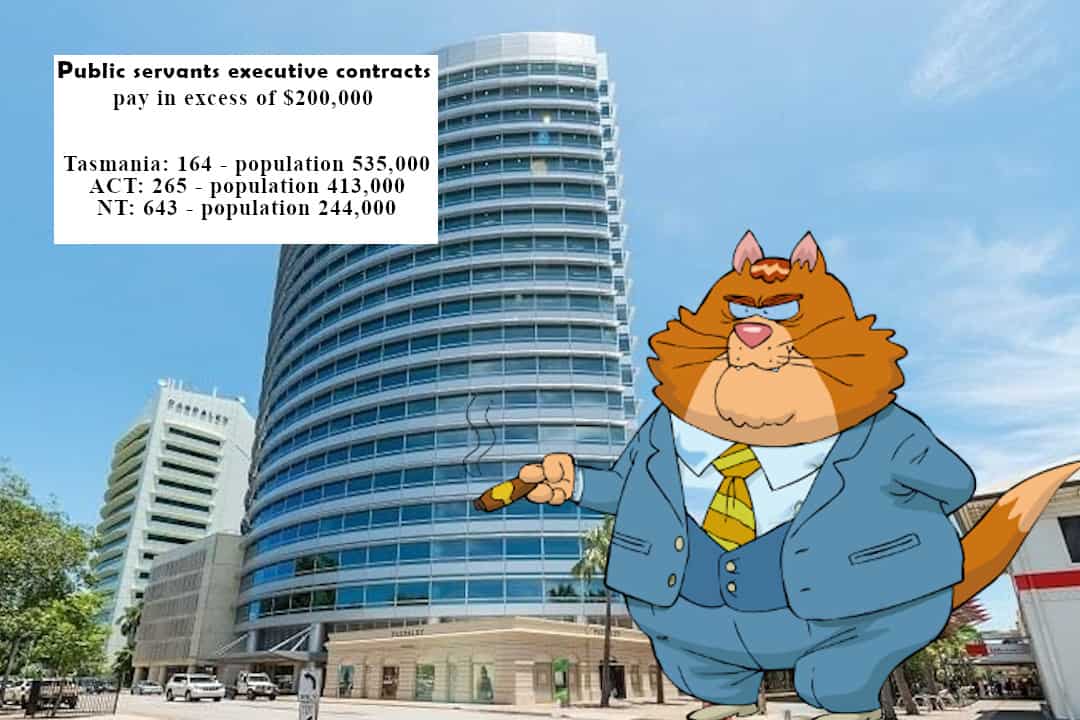 A new analysis of NT Public Service executive contracts shows the Northern Territory has more “senior executive services” staff than Tasmania and the ACT combined, despite a quarter of the population.

The figures come as economists predict the NT Government will lose $500 million in federal GST revenue over the next two years as a result of the COVID-19 pandemic on the Australian economy – on top of the NT’s already dire financial situation.

Cutting just 200 of those senior executive roles could save the Territory $40-$50 million per year ongoing, Mr Parish said.

“If the Territory reduced the size of the senior executive service form over 600 to 400 or so, and that would still be leaving it larger than either ACT or Tasmania so it’s hardly a drastic cut, but if you cut 200 people who are making $200k-plus you could save between $40-$50 million per year,” he said.

“That would help reduce the deficit much quicker than the Langoulant report that the government claims it is following.”

The Gunner Government has overseen record net debt levels before the economic effects of the coronavirus pandemic, blowing out from $1.7 billion in 2016 to an expected $7 billion this year.

The estimated half-a-billion-dollar cut in federal GST payments over two years is expected to strain resources further, although Treasurer Nicole Manison has not yet explained the government’s plans for dealing with the shortfall.

The government has moved to find savings by reducing the number of executive contracts by 52 and implementing an executive wage freeze, although figures for how much has been saved to date has not been released.

A progress report into the government’s effectiveness at meeting the recommended budget reforms was quietly released in May that showed only 25 of 74 budget repair recommendations had been met since early 2019.

The public service recruitment freeze was on the list of completed recommendations but no figures were offered to suggest it was achieved. Wage freezes for executives and parliamentarians was also listed as still being underway, although the report stated a working group had been struck.

“If you have that many senior executive services, they’re spending their time justifying their existence by developing regulation and compliance mechanisms, which then in turn takes up the time unnecessarily of the public servants at the coal face delivering services,” he said.

“In a lot of ways, those downstream effects (of cutting positions) would make much more difference to the Territory’s prosperity than just the savings in salary.”

Chief Minister Michael Gunner did not respond to questions on whether he would be looking at making larger cuts to executive positions to address the mounting debt levels and GST shortfall.

He has pledged to release some form of financial update on the state of the Territory’s books on July 29, although the official budget has been pushed back to November.

Country Liberals leader Lia Finocchiaro declined to comment on the latest executive contract numbers or what the CLP will do to fix the bloated bureaucracy. Her party has pledged not to cut positions in the public service if elected.

Territory Alliance leader Terry Mills said his party would address executive contracts if elected, but was short on specifics and did not commit to making any cuts.

“Both Labor and CLP have allowed the number of senior executives in the Territory public service to balloon completely out of control,” he said in a statement.

“The Territory Alliance will immediately halt the growth in senior executives to restore the balance between the rank and file and upper echelons of the public service.”