EXCLUSIVE: The president of Territory Labor’s youth wing has resigned from his job in Federal MP Luke Gosling’s office after a social media video surfaced showing him snorting a white substance that appears to be cocaine, the NT Independent can reveal, raising further questions about an alleged drug culture inside the Territory Labor Party.

The video, which was posted to Snapchat last October, shows NT Young Labor president Harvie Stiller with a white substance on a table, cut into lines, which he then appears to snort through a $50 note.

The video is captioned at the bottom with the phrase “18th  birthday lines”.

It is understood the video was shot in October 2020, two months after the election, but shared through the app a year later by a friend of Mr Stiller’s. It was recorded and provided to the NT Independent.

Mr Stiller has been active in the party for some time, and was heavily involved in Labor’s 2020 election campaign, door-knocking and appearing with numerous Labor politicians and Ministers, including the Chief Minister, in photos on social media.

Mr Stiller was at some point hired by federal Labor Member for Solomon Luke Gosling, although the exact timing of the hire and the nature of the role remains unclear.

Mr Stiller hung up on the NT Independent when asked about the video yesterday, saying, “this is ridiculous, I have no comment”, before later that afternoon resigning from his job with Mr Gosling.

Mr Gosling’s office said his resignation was accepted yesterday, after the NT Independent sent questions about the video.

“The alleged incident you refer to took place almost 18 months ago, and predates the staff member’s employment in this office,” said Mr Gosling’s chief of staff Neda Vanovac in a statement to the NT Independent.
“Luke Gosling was made aware of the allegations today. The staff member has since resigned.”
It is unclear if he has also resigned as president of NT Young Labor.
Mr Stiller’s LinkedIn page states that he is currently completing a Bachelor of Law degree at Charles Darwin University.

He is also listed as a member of CDU’s University Council on the university’s website as an undergraduate student member on the governing body that is responsible for oversight of the university’s affairs.

As the undergrad rep on the council, Mr Stiller started a petition in late 2020 to establish a campus bar, stating that not being able to get a drink on campus was “abhorrent”.

The alleged drug use depicted in the SnapChat video has reignited long simmering questions about illegal drug use within the Territory Labor Party.

Labor’s cocaine sex scandal last year resulted in Mr Gunner’s senior adviser Kent Rowe losing his job and Labor MLA Mark Turner being turfed out of caucus, and also raised the issue of illegal cocaine use amongst Labor staffers. There has been no suggestion Mr Turner engaged in drug use.

In the fallout of the scandal, however, Mr Gunner admitted he was aware of allegations of cocaine use by fifth floor staffers, but said he did not initiate an investigation because there was no proof to substantiate the “gossip and rumours”.

“I’ve been aware of allegations, I have never received any information, I have no knowledge and I certainly have no tolerance of any drug use,” Mr Gunner said last February.

It was later revealed that the NT Police’s Special References Unit was investigating alleged cocaine use on the fifth floor, however it remains unclear where that investigation currently stands.

Mr Gunner drew heavy criticism for suggesting at the time that police should be required to undergo drug testing, but that politicians and their staff should not have to be tested.

Young Labor backed Mark Turner; kept him in the party 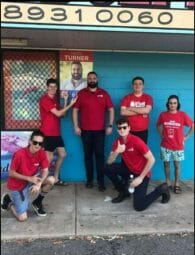 Young Labor backed Mr Turner and the party’s administrative committee ruled he should not be expelled from the party, in a humiliating defeat for Mr Gunner.

It is unclear if any other Labor members were involved in the actions depicted in the video or where the white substance was purchased.

Labor president Erina Early did not respond to questions about the video or alleged illegal drug use within the party.

Mr Gunner’s office also did not respond to requests for comment.