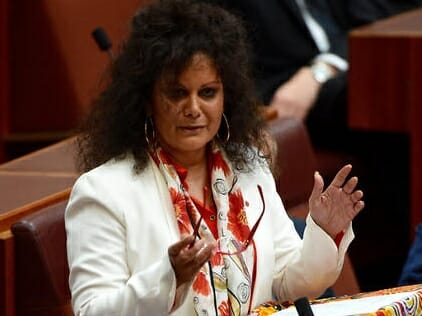 Chief Minister Michael Gunner continued his “anti-vaxxer” crusade in Parliament on Thursday, declaring anyone who opposes mandatory vaccinations an “anti-vaxxer”, after Labor Senator Malarndirri McCarthy criticised the government’s communications around its vaccine policy.

The Opposition CLP asked Mr Gunner during Question Time if he thought Ms McCarthy was also an anti-vaxxer, after she questioned the mandatory vaccine policy.

Mr Gunner doubled-down on his anti-vaxxer rant from Wednesday, when he accused the entire CLP Opposition of being “anti-vaxxers” without any proof and despite the fact that all members have been vaccinated.

“Anyone who supports people or policies that oppose mandatory vaccination are anti-vaxxers – absolutely – I will always call it out,” he said.

Mr Gunner added that he did not hear the interview but spoke to Senator McCarthy later.

“I sought clarification from her about whether she supported our management vaccine policy or not. She told me that she did support it,” he said.

“Let me be clear, absolutely clear, if Senator McCarthy does not support our mandatory vaccine policy, then in my opinion, she is absolutely an anti-vaxxer and I will call her out just as I’ve called out the CLP yesterday.”

Ms McCarthy said on ABC Radio that the Gunner Government’s mandatory vaccine policy had not been explained well to the public and that people should be consulting with their doctors.

“One of the biggest criticisms here is that the communication has not been there, not even in the languages, appropriately, and that is where I’ve been pushing – people need to be informed to make the right decisions for themselves,” she said.

“I’ve have raised concerns about the fact that anything’s mandatory what we’ve said with vaccines is that this is about choice, people going to their local doctors checking if it works for them.

“Naturally, I’m encouraging people to take the vaccine from the sense of seeing the disaster unfolding in New South Wales around Delta especially in the Western New South Wales communities there.

“We want people to make the decisions themselves, but we have to give them all the information.”

Mr Gunner continued in Parliament to demand the CLP state whether they support his mandatory vaccine policy.

“Eight days after we announced clear plans around mandatory vaccines, they still don’t know where they stand,” he said.

The CLP and independent MLAs have still not been given a briefing by the Chief Health Officer about the government’s vaccine policy, although a meeting is scheduled for tomorrow. However, Hugh Heggie will not be in attendance, Mr Gunner confirmed.

The CLP said they would not be taking health advice from the Chief Minister and would wait to discuss the mandatory vaccination policy with Dr Heggie.

“If the Chief Minister wants everyone pushing his mandatory vaccine message, why won’t he allow the Chief Health Officer, or his Deputy, to immediately brief members of the Opposition and independents?” CLP Health critic Bill Yan said.

On Wednesday, Speaker Ngaree Ah Kit refused to throw Mr Gunner out of Parliament after he refused to withdraw the remarks after her ruling that his accusations that the CLP are anti-vaxxers was “highly disorderly”.

Instead, yesterday’s written parliamentary record had the phrase deleted at the Speaker’s request.

Question Time continued its chaotic antics with numerous interjections and shouting matches carrying on over the hour with Ms Ah Kit asking for time to “clear my head” at one point before making a ruling.