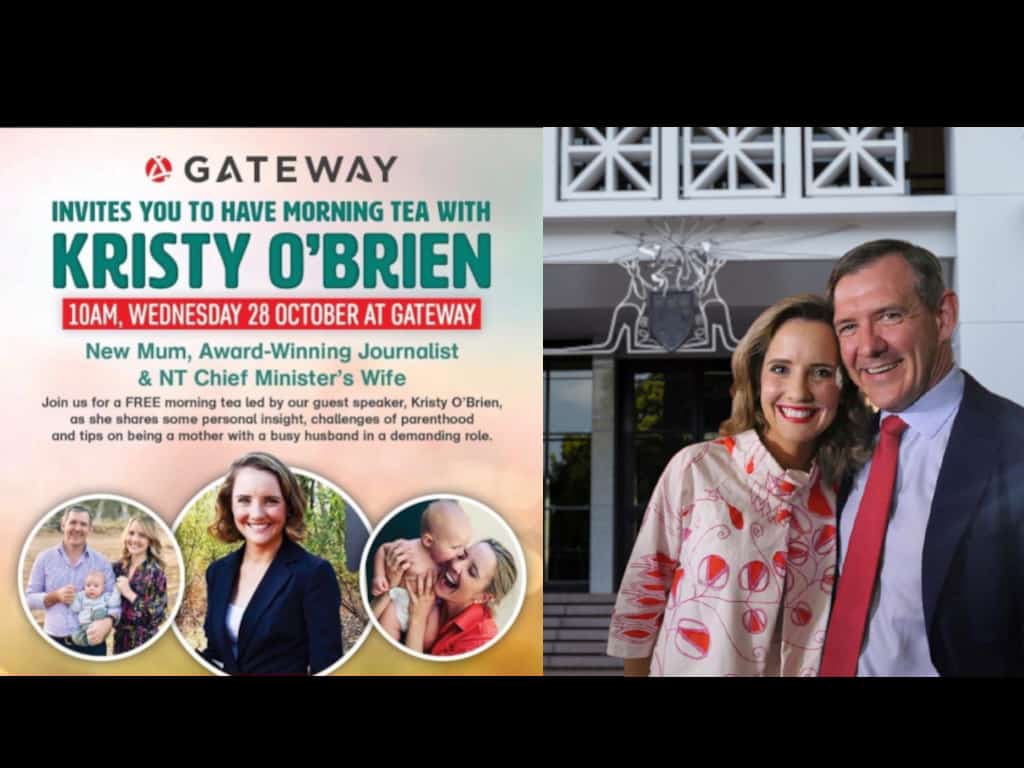 The Chief Minister’s Office helped arrange for an ABC journalist to deliver a political “morning tea” speaking engagement, sparking fresh concerns over an unresolved conflict of interest at the public broadcaster and how it covers the Gunner Government.

The event, which features ABC reporter Kristy O’Brien, has been advertised online and on billboards at the Gateway shopping centre as a chance for the public to meet the “new mum, award-winning journalist & NT Chief Minister’s wife”.

However, Ms O’Brien is employed as a journalist with the publicly-funded broadcaster which has a strict code of principles and standards that states “external activities” of employees “must not undermine the independence and integrity” of the ABC.

A Gateway marketing representative told the NT Independent she approached the Chief Minister’s Office to engage Ms O’Brien for the event that is inherently political by its repeated reference of Chief Minister Michael Gunner in advertising materials.

The ABC has a strict policy around “political relationships” of its employees, stating that “there should be no conflict between the private interests of ABC staff and their official duties”. 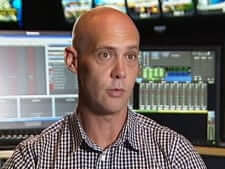 “The outside activities of staff, including financial, personal and political relationships, must not compromise the editorial integrity of ABC programs,” the policy reads. “Staff are expected to arrange their affairs in a manner that will prevent conflict of interest.”

According to policy, ABC management must approve employees’ external engagements, which in this case does not appear to have occurred.

Questions to ABC Darwin news editor John McElhinney were passed on to a Sydney-based PR manager who did not address the substantive questions over the inherent conflict of interest or how the Darwin newsroom manages the situation on a day-to-day basis.

“The ABC has no involvement in the event at The Gateway and has no comment on it,” spokeswoman Sally Jackson said in an email. “However, the ABC is satisfied that it isn’t a political event and that Ms O’Brien’s involvement does not constitute a conflict of interest.”

However, several senior ABC staff members have raised concerns over Ms O’Brien’s relationship and its impact on the public’s perception of the taxpayer-funded broadcaster’s Darwin newsroom, which they have privately said casts aspersions on everyone’s integrity.

“Can you imagine this happening in Victoria – where the premier’s partner works as chief of staff? It just wouldn’t happen anywhere else,” one employee said. “They’re not even pretending to manage it here.”

Conflict of interest concerns first raised by staff in 2016

Following the 2016 NT election that saw Mr Gunner elected Chief Minister, a few senior journalists and other ABC staff raised concerns with management and the ABC’s Media Watch program about the conflict of interest.

It’s understood management moved Ms O’Brien to a national rural program then, but she remained in the Darwin office and eventually drifted back into rotating positions including chief of staff, executive producer of the 7pm television bulletin and radio news reader as late as her maternity leave early this year. 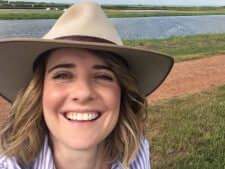 The as yet unaddressed conflict has also raised questions over how the ABC covers the Gunner Government and whether it provides preferential treatment to Mr Gunner because of Ms O’Brien’s position.

The ABC did not respond to questions over why it chose not to report on Mr Gunner’s blow-up at another ABC journalist last Friday afternoon when he demanded she stop asking questions about his decision to scrap the legislative scrutiny committee.

The ad for the morning tea event states Ms O’Brien will share “some personal insight, challenges of parenthood and tips on being a mother with a busy husband in a demanding role”.

Ms O’Brien had previously refrained from political appearances, declining an NT News interview request in 2016, by telling the newspaper she wanted to “avoid the political spotlight and focus on my work”.

The Chief Minister’s Office did not respond to questions.