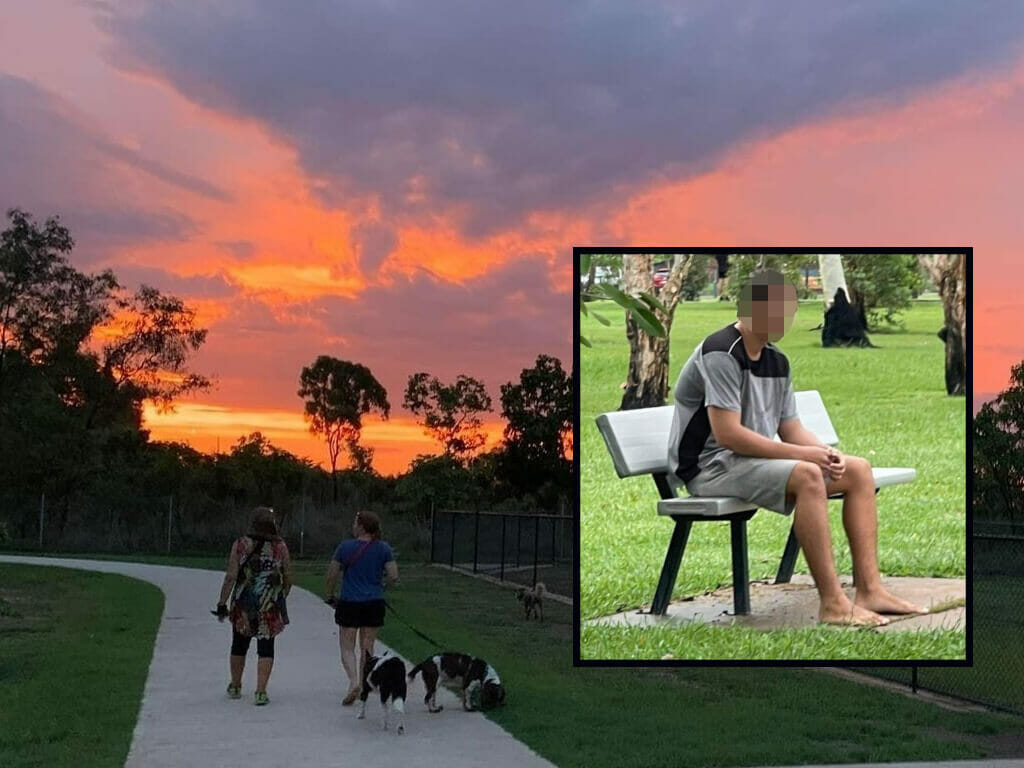 NT Police have not issued a public warning about a naked man who several women have told the NT Independent has approached or chased them in the Marlow Lagoon dog park since mid December, while another source said police are hamstrung in apprehending the man because of a lack of official victim statements.

The NT Independent has spoken to five women who say they have encountered the man since December 18, including one woman – who did not want to be named – who said she was chased by the naked man about 9pm last Tuesday, when she went to walk her dog after a late work shift.

She said she had been in the park for about five minutes when she saw a man striding naked across the park in an area near her.

She ran to the car, she said, but he heard her car beeping from being remotely opened, and started running at her.

“I immediately picked up my dog’s balls and grabbed his collar and hightailed it. I was petrified,” she said.

“I was lucky I was right near the gates. I locked the car and started it, and as I looked over I saw he was running towards me. I floored it and he was running faster.

“I was just really frightened. I was intimidated. I have had a sick feeling since. I haven’t been sleeping. I don’t want anyone else to go through this. It is horrible. What would he have done?

“If he had seen me to begin with and began to chase me, he would have caught me.”

The woman said she warned another woman who was sitting in her car in the carpark alone, and called police. She said she was told police went to the park but didn’t find the man.

The woman said she had been too scared to return to the park to warn others but was going to make an official police statement.

“I am not willing to go back, I can’t bring myself to go back,” she said

“That gives me goosebumps even now. I am not used to feeling unsafe.”

Leone Clark said she saw the man naked, hiding in the bushes on December 23, and called the police but the man got away. She posted on the Marlow Lagoon dog park Facebook page to warn others and had since been made aware of him approaching other women and “making them feel unsafe”.

Another woman – who also did not want to be named – said the man had not exposed himself to her but on December 21, she called the police for an older woman at the park who was quite disturbed and came running up to her.

“She wasn’t really in a state to call police herself,” she said.

“I have seen him on a few occasions and he often walks into the park alone and sits on one of the seats in front of the river.

“We know police know who he is and he has been spoken to. I know they aren’t doing much more until someone makes a victim statement.

“It’s quite frightening because vulnerable people go to that park, such as young children, and the elderly who won’t be able to get away fast.

“And it’s only a matter of time before his offending progresses.”

Another person who witnessed the man’s actions, Kelly Aherne, said the man came out of the bushes naked and carrying his clothes on December 18, and walked towards her and another woman, when they were standing at their cars chatting about 7.20pm.

They drove off before he could get too close, and she called the police, but she said she did not understand why there had not been a public warning issued by NT Police.

“(When I saw him I thought) Fucking hell! I was amazed. My heart was beating,” she said.

“When there are only two women in a carpark in the dark and a man walks out of the bushes with his clothes under his arm, it is not like you want to hang around and have a chat.

“My understanding of this, is he is just harmless, he his showing himself off but not doing anything. It is intimidating. And it is frightening. Especially if you have other mental stuff [from violent experiences with men] going on,” she said.

“What has to happen before action is taken? It is such a beautiful place, he has just destroyed it.

“I don’t understand any of this. It blows my mind. I can’t believe it is going on for so long. And it seems he has no fear, and he is getting more overt.

“It is appalling, you have families and children there, the potential for assault is there. What has to happen for something to be done?

“What is it I am missing? What do you have to do to get action? You have to be joking. You have his name. There have been so many instances.

“I have not been back to the dog park.”

What police are doing

NT Police media manager Rob Cross did not respond to the NT Independent’s questions about what police were doing about the man and why no public warning had been issued, or why there were no signs in the park warning about the potential danger.

Police also did not say if the man had been charged with an offence.

The NT Independent has reviewed NT Police press releases and Facebook posts going back to November 18, a month before the first encounter with women the paper has been made aware of. There have been no warnings issued about the man and the Independent understands there are no warnings at the dog park itself.

Another source said the man goes to the park with a little white car with a dog now, and police know who he is but said alleged victims who have called triple-0 have not made follow up statements which has prevented them investigating.

They said general duties police officers regularly patrolled the area after the first encounter with the man was reported to them.

“So the police now know who he is. He is indigenous, about 19 or 20 years old. Done too many drugs and from a shit family, well known to police,” the source said.

“I can only surmise that they haven’t made a move because they need the victims to go make statements. To formally ID him. Police cannot push anyone to do that.”

Another source with knowledge of NT Police practices questioned why there was not more being done to remove the man, and at least, warn the public.

“Why aren’t police warning the public about this?” they said.

While another source gave the NT Independent a photo of the man with his name. The man named was in local court on Monday on theft charges.