Who is ‘United NT Businesses’ and why are they about to sue the Gunner Government? 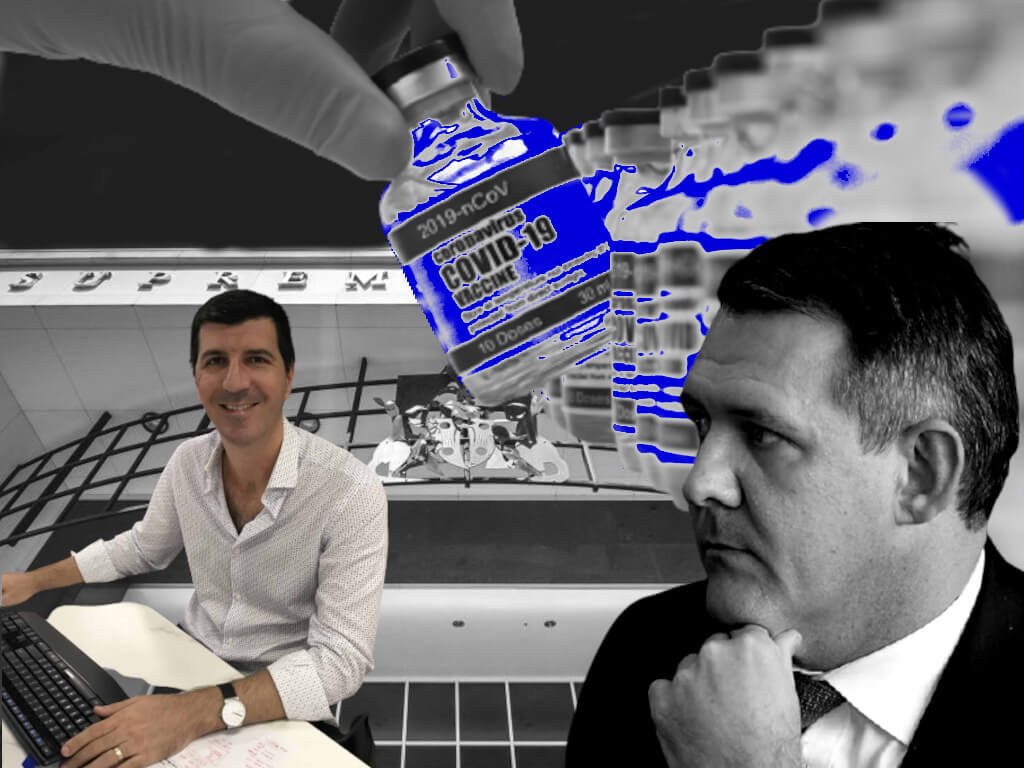 In a wide-ranging exclusive interview with the NT Independent, that explored the formation and objectives of the group called United NT Businesses, president Mario Tsirbas and committee member Ross Bohlin said the legal action was necessary because their member businesses have been hurting since the vaccine mandate came into effect last month and that there are better ways to protect the community than forced vaccines.

They said their legal advice has made them confident they can overturn the NT’s Chief Health Officer directions.

“We know that our law is written differently (than other states),” Mr Tsirbas said.

“Our [Chief Health Officer’s COVID-19 Directions No.55] law is much broader in its scope and application, and there’s certainly elements of it that can be challenged. We’ve had a legal team made up of QCs, barristers and solicitors from all over Australia providing advice and we feel that we have a case that is worth arguing and that we can win. And that’s what we’re going to do.”

Mr Tsirbas would not disclose the details of the legal argument, but said the gist of the argument would be that “the laws themselves go beyond what the (emergency) powers allow them to do”.

“By writing the directives as they are, they’ve overstepped and therefore (the laws are) invalid or unlawful,” he said.

“The gist is, they’ve gone too far … and beyond the scope of what the powers were written to provide. It’s a very poorly written law. And testament to that is how many times they’ve had to modify it.”

Mr Tsirbas said the legal action will be funded from members of United NT Businesses as well as from donations made to the group from anonymous Australians from around the country and lawyers providing their services for free or at a reduced rate.

“There are many, many concerned people, business people, who are helping fund this,” he said.

“They put their hands on their hearts and say ‘we think this is wrong, we think the government’s overstepped the mark and this isn’t the way our society should work, but we’re going to do it anonymously because we can’t risk the loss or damage to our businesses’.”

“So this burden is hitting business from every angle.”

Who is ‘United NT Businesses’ and what do they want?

Mr Tsirbas said the 500 business members in the group have been long ignored by the Gunner Government, the NT Chamber of Commerce, other industry groups and the CLP Opposition who have all either refused to meet with them to discuss the implications of the vaccine mandate that came into effect on November 12 or told them they would not be objecting to the vaccine mandate.

“(Our members) found with United NT Businesses, a place where their voice is heard, where their interests are taken into account, and action is actually being taken to make them feel that their voice counts,” he said.

He added that the frustration in the community is not just around economic concerns.

“People are divided amongst each other,” Mr Tsirbas said.

“I mean, we’ve even got families that are fighting, brothers and sisters, and parents against kids, and grandparents with grandkids. This is really painful to see that our society is going down this path. And it’s something that seems to be encouraged with some of the actions that the government is taking – and certainly some of the rhetoric that we’ve heard.

“You cannot get up as the Chief Minister and call the public flogs and tossers, you cannot do that. You must have a balanced (approach).”

Mr Tsirbas said that United NT Businesses is not an anti-vax group, nor are they COVID deniers.

“No sane person wants to see COVID devastate our community and the implication that if you are not 100 per cent for the mandate you are therefore against the good of society is patently false,” he said.

“People may label our group as anti-vaxxers even though many of our group are vaccinated. We don’t know the stats (of our members) because we don’t ask.”

Mr Tsirbas and Mr Bohlin said in the interview with the NT Independent that they are both unvaccinated for “personal” reasons.

United NT Businesses has acted as an industry lobby group for business owners in the void of any other group wanting to question the government’s vaccine mandate laws, Mr Tsirbas said, by offering legal advice and providing information. The group has also been approached by public servants, including teachers and health professionals who have reached out to see if they could help them with their issues around the vaccine mandate because the unions too have not addressed it, he added.

The government’s failure to show leadership has caused the group to be established, Mr Tsirbas said.

“So, if they’re not (going to lead for everyone) unfortunately, someone’s going to have to step up,” he said.

“This government has shown itself to be woefully inadequate across every major portfolio.

“When you have something as potentially dangerous as suspension of democratic process and the ability to hold the government to account, you need to be damn well sure that you’re doing the right thing. And you need to trust that the government is operating in the best interests of the people.

“COVID is a serious thing and we’re not downplaying its impacts one little bit. [But] we need to have a balanced and proportionate response and it needs to be inclusive, and it needs to be something that gains the support of everyone when you’re talking about suspending normal democratic process and the ability to hold the government to account.

“This is not me saying this … this is the broad consensus of our group.”

What’s the alternative to the vaccine mandate and what happens if the court case is successful?

Mr Tsirbas said the plan for life after the vaccine mandate should entail a “vaccine-and” approach, “not a vaccine-only” approach.

He said the risks of COVID will need to be managed by businesses the same way they currently manage other occupational health and safety risks.

“The more information and research that comes out (on COVID-19), the better able we are to take proportionate responses that actually target the risks.

“We have more and more tools at our disposal. Now we have rapid testing, we have other treatments, we have a better understanding of adverse vaccine reactions. So, we know if we are sending our team to get vaccinated, what are the potential risks to them.

“The vaccine isn’t the only safety measure.”

Mr Tsirbas conceded some would have to be vaccinated in potential high-risk scenarios like aged care facilities, but that other measures would also help prevent the spread of COVID.

Mr Tsirbas said United NT Businesses would be putting out different “policy positions” drafted by their “medical and legal people” in the coming weeks about how business leaders and others can work together to find solutions for keeping the community safe from COVID-19.

“How can we be 18 months into the COVID crisis and and not have a health system that’s able to manage even the smallest amount of cases,” Mr Tsirbas said.

“So what we’re saying is ‘okay, we are the Territory … we have a lot of knowledgeable, skilled, experienced people across all sectors of the economy and society’. Let’s start to look at what do we put in place. Let’s plan it and do it in a holistic way.

“At the moment we have a walnut being cracked, not by a sledgehammer, but by Thor’s hammer and so is this the right approach when you suspend normal democratic processes? (When) you ask people to put their personal good secondary to the public, common good, you’d better do that with the lightest, most delicate touch and with all the information at your fingertips, and you’ve got to bring people along for the ride.

“You can’t do it by vilifying people, by denigrating people and by dividing society. That’s wrong. And that’s our position.”