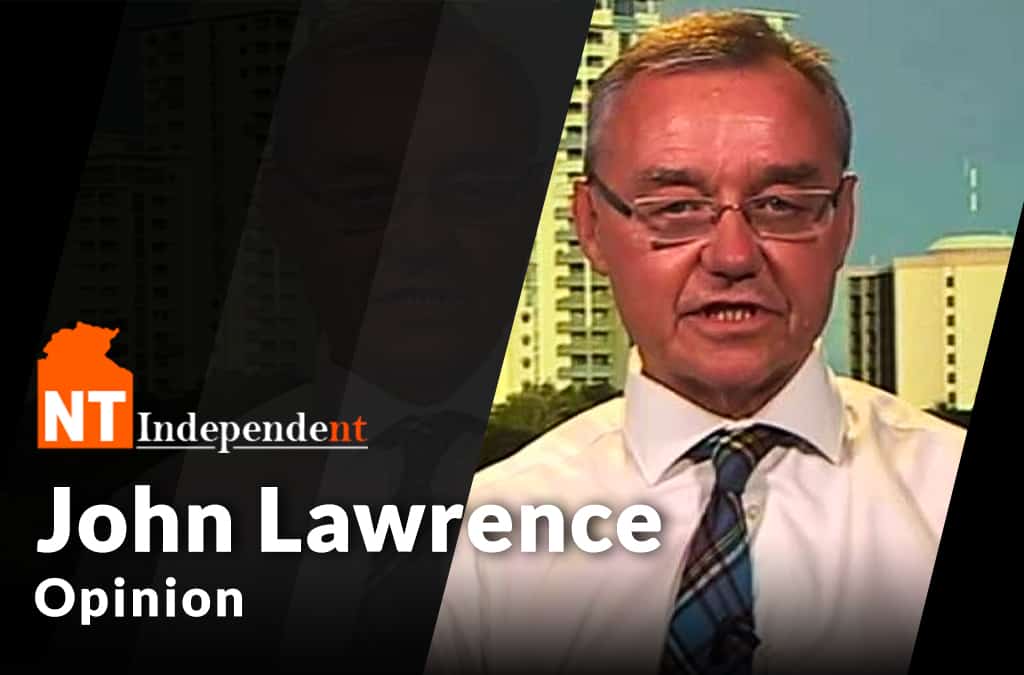 OPINION: As you fly into Darwin you can’t fail to see through the window of your aircraft the real symbol of the Northern Territory. This initial image is no Eiffel Tower, and it’s certainly no Statue of Liberty. Neither is it some amusing giant crocodile. It’s an enormous, ugly footprint on the ground, 36 kilometres south of Darwin: the Darwin ‘Superjail’. In these Orwellian times it’s officially called the ‘Darwin Correctional Precinct’.

Of course, it doesn’t correct anything or anybody and it’s not a ‘precinct’. It’s just a very big jail. It doesn’t as yet have signage declaring ‘Freedom is Slavery’ or ‘Work Sets You Free’. Perhaps later.

Costing $1.8 billion, it represents the largest outlay ever made by any Territory government, and although it only opened at the end of 2014 it is already overcrowded, so a new one will be required soon. 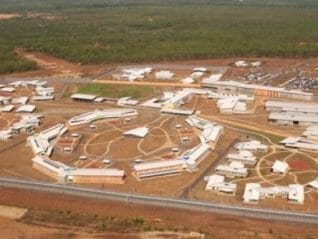 The NT figure is a catastrophic 913, of whom 86 per cent are Aboriginal. All – 100 per cent – of children in NT detention are Aboriginal (yet only 30 per cent of the Territory’s population is Aboriginal).These NT figures are more disturbing by virtue of their marked acceleration in the last decade, particularly for women.

The Territory’s imprisonment rate has always been too high and disproportionately Aboriginal, but in the last ten years it has accelerated past Pluto.

How could such a shameful situation exist in 2020 Australia?

Over the last 20 years, instead of pursuing excellence and improving professional standards, the NT legal system has deteriorated. Jurists and jurisprudence have been replaced by managers and ‘efficiency’.

I have been practising criminal law in this jurisdiction since 1987. In the last five years I have seen the ‘system’ go past tipping points to the extent that its functioning now falls somewhere between absurd and surreal. It is no longer an overworked, under-resourced and at times chaotic legal system. It is now not fit for purpose and has become a depraved jailing machine consuming Aboriginal men, women and children at an ever-increasing rate. Most of the players in this theatre of the absurd—Supreme Court justices, local court judges, and lawyers—are just going through the motions. Most of them have either become inured to the process or are unaware of any proper alternative to its absurdity and inadequacy. The criminal courts now operate like clearing houses rather than vehicles for due process.

Inadequate resources, inadequate time, inadequate experience, inadequate training and supervision, inadequate, inadequate.Inadequate. This has been one of the factors that have led to more, and longer, Aboriginal imprisonment. The legal profession has presented no real opposition to this incremental slide and is now effectively muted, if not signed up to this mediocrity.

Legal groups have no desire for change, have become ‘legal enablers’ to broken system

Perhaps of more concern is that this legal ‘system’ is locked on this trajectory, which has now become unsustainable. It’s locked in because in 2020 there is very little, if any, genuine desire on the part of the players in the system to change it. It has now become a given. 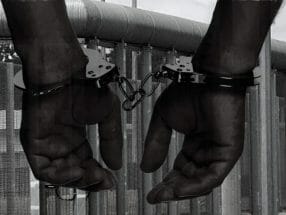 That silencing of Australian history was first articulated by Professor W. E. H. Stanner in his groundbreaking Boyer Lectures in 1968. Entitled ‘The Great Australian Silence’, the lectures reminded listeners not only of the historical injustices and massacres committed against Aboriginal people but how that history was deliberately buried and forgotten. Stanner explained that Australia’s sense of its past, its very collective memory, had been built on a state of forgetting that couldn’t ‘be explained by absentmindedness’. He called it a ‘cult of forgetfulness’ practised on a national scale. He also described white Australia’s ‘sightlessness’: the aversion of our eyes from the facts.

This feature also figures in explaining how this Aboriginal incarceration horror continues to worsen and has now become the norm in the Northern Territory.

An obvious recent example is the shameful treatment of Aboriginal children in Don Dale detention centre, the resultant White/Gooda Royal Commission, and the failure of that inquiry to effect any real change. Contrast that with another recent Royal Commission: the inquiry into Institutional Responses to Child Sexual Abuse, which led to real and significant changes, including large numbers of offenders being prosecuted and jailed. Could the explanation for these different outcomes be that the White/Gooda commission’s subject matter was merely the physical and mental abuse of vulnerable Aboriginal children detained in the custody of the state?

The White/Gooda Royal Commission, set up by Prime Minister Malcolm Turnbull in July 2016 to investigate the horrors exposed by the Four Corners program ‘Australia’s Shame’, confirmed the abuses that were being inflicted upon Aboriginal children in Don Dale and Alice Springs detention centres. Four Corners revealed, through graphic film, boys being tear-gassed, beaten, held down, spit-hooded, shackled, hosed and unlawfully placed in isolation. It showed what is now the unforgettable symbol of the NT legal system: Dylan Voller in a cell, bound to a chair, hooded, catatonic.

The Royal Commission discovered unequivocally the individuals who were responsible for these unlawful and barbaric acts, and yet no one was charged. Further, despite the evidence revealing which individual politicians, high-level bureaucrats and detention-centre staff were responsible for the unlawful solitary confinements—for 14-year-old Jake Roper it was twenty-three out of twenty-four hours each day in a 3- by 2-metre cell for sixteen straight days and nights—no real consequences followed for any of them.

Also, it was discovered during the hearings that, throughout this entire period, each and every one of the children who were beaten, abused, unlawfully kept in isolation and subjected to other cruelties were represented by lawyers from NAAJA or the NTLAC. What, if anything, did the lawyers do for their clients in this situation? And yet the Royal Commission refused to inquire into this highly relevant feature of the systemic racist abuse of these Aboriginal children. The refusal to scrutinise the performance of the children’s lawyers rendered it the White/Gooda Royal Omission of Inquiry.

Further, the fact that this Royal Commission failed so miserably is particularly dispiriting as, unlike the many previous reviews and inquiries, this one stated from the outset, through counsel assisting’s opening statement, that this was a Royal Commission that ‘had to produce action and results’.

Consistent with that, on the second day of evidence Pat Anderson, co-chair of the Referendum Council, chair of the Lowitja Institute, former president of NAAJA and co-author of the Little Children are Sacred Report, gave compelling evidence warning against more ‘nothingness’. While thumping the table, eyeballing both commissioners and holding the whole court spellbound, she implored them:

“We spend a lot of time talking about Aboriginal issues and the problems and everything, but very little has been done.

“It’s just the nature of these things. And I really fear—our hope is, Commissioners, that this isn’t the fate of this Inquiry. In fact, I would go so far as to say the very survival of Aboriginal people in the Northern Territory depends on this Commission making a real impact here, that it not just be—we all feel good about talking about it, and we go away feeling all warm and fuzzy, and it’s dropped into a filing cabinet somewhere. That cannot happen here today—this, this, this report. Please, I beg you, do not just put it in a filing cabinet. You are morally bound to do something, not just talk about it. That’s all this country ever does is talk about blackfellas.”

Her plea fell on deaf ears. The White/Gooda report and recommendations went into that filing cabinet more quickly than any of its many predecessors.

Referring to the shocking things seen on Four Corners, she went on:

“You know 10 years ago when we did the Little Children Are Sacred (report) it was inconceivable that that might happen here even in the Northern Territory. I watched the Four Corners program, like most Australians that night, and…that was my thought, you know 10 years ago this would not have happened. So I think it is part of this general moral decay. Australia’s…in a really bad way here and I don’t know how you return it to a mature, sophisticated, civil society.”

In November 2017 the White/Gooda commission made 147 findings and 227 recommendations. To date, few of these have been implemented, and some have even been contradicted. The interim report recommended the immediate closure of Don Dale and the construction of a purpose-built juvenile facility, not anywhere near the adult jail. The NT Government ignored this. The children are still in the old Berrimah jail, and the new facility is slated to be built beside the adult Superjail. 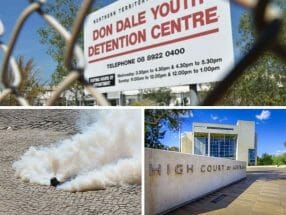 The commissioners even failed to establish a mechanism to monitor the implementation of their recommendations, even though such mechanisms have often been established in relation to other Royal Commissions.

This includes NAAJA, CLANT and the NTBA, who are now embedded in this status quo and have become its functionaries. They say little and do less. The only people in the Territory who mount any opposition are the children themselves, who, confirming Martin Luther King’s words that ‘a riot is the language of the unheard’, regularly attempt protests and breakouts, and in one instance in November 2018 burned down the education section of the prison.

US Civil Rights heroine Fannie Lou Hamer said back in 1964, ‘I’m sick and tired of being sick and tired’, and  Pat Anderson echoed these sentiments in her evidence to the Royal Commission. The mistreatment of Aboriginal children that the Royal Commission exposed was bad enough. That no action was taken against those responsible and that the inquiry’s recommendations have been ignored gives you a real insight into the Northern Territory and Australia in 2020. Welcome to the Aboriginal Gulag. This status quo is maintained with little prospect of change. The national outrage and shock following the Four Corners exposé have given way to the cult of forgetfulness. The day after Four Corners screened, Aboriginal journalist Stan Grant, describing his reaction, wrote in The Guardian, ‘Things once seen cannot be unseen’. However, once again, Australians have unseen.

Pat Anderson, Aboriginal activist of 30 years’ experience, and not a journalist, was spot on. All of this deterioration has occurred within a period of general moral decline. This failure sits within a jarring epoch in which we are losing our basic humanity. We now live officially in the post-truth age. The only positive word in the proffered analysis is ‘unsustainable’: this broken, failed system is bound to fall over before any effective improvements are made to it. Simmering and about to occur are further deaths in custody, further police tragedies like the Yuendumu shooting and further attempts by children to break out of detention.

We are at a critical moment. Climate change, COVID-19, economic collapse and more mean that this period of history has become an interregnum between the old and whatever is to come next. There exists a common thread between the Belarus protest movement, Yuendumu, the Hong Kong protest movement, Extinction Rebellion, Don Dale and more.

It’s time the lawyers and others within the Territory’s criminal legal system broke out of their day-to-day sense of normal. As the Black Lives Matter slogan says, ‘Doing Nothing Time Is Over’.

John B. Lawrence SC is a Darwin barrister and past president of the Northern Bar Association and of the Criminal Lawyers Association of the Northern Territory. He was a Crown prosecutor in Darwin and later solicitor in charge of the Northern Australian Aboriginal Legal Aid Service. He represented one of the Don Dale youth detainees during the Royal Commission.

This article originally appeared on the Arena Online website on October 22, 2020 under the title, ‘The Aboriginal Gulag: The Northern Territory’s criminal legal system’.