‘We expected it from the beginning’: Passenger on repatriation flight to Darwin tests positive for COVID-19 A returning Australian on board a repatriation flight which landed in Darwin yesterday has tested positive for COVID-19.

The 31-year-old female passenger was on board the first special repatriation flight from India carrying 183 Australians who had been stranded in the country since the onset of the Coronavirus pandemic.

Travelling with her two children, the woman was due to spend two weeks quarantining within the Howard Springs facility before flying to her home in another state.

National Critical Care and Trauma Response Centre chief executive Len Notaras said the female had been screened ahead of the flight and returned a negative result, but on arrival in Darwin recorded a positive result.

“On screening here, with our meticulous screening services [the female] has shown to be positive for COVID-19,” Mr Notaras said.

Mr Notaras said the woman is in “remarkably good health” and has been placed in isolation at the Howard Springs ‘hot facility’, where she will be monitored. 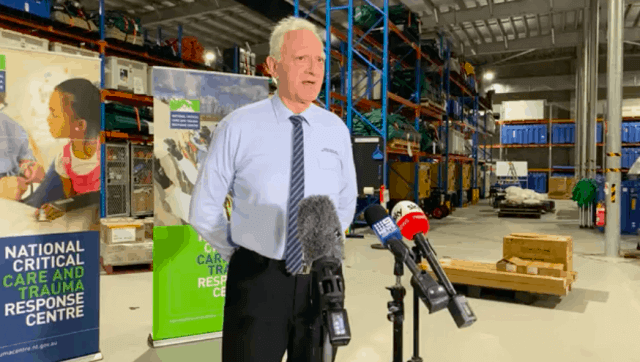 “There is no threat to the community at the centre at the present time and the meticulous infection control standards that are taken out there will ensure people remain safe, and indeed the community remains safe, which is a priority,” he said.

Mr Notaras said the female is asymptomatic and will remain in the “hot facility” where a “higher level” of quarantine is upheld.

“In other words full PPE is used and folk who are actually in the contained area are restricted in their movements,” Mr Notaras said.

Mr Notaras said the female was travelling with her two children, who have been tested, and will remain in isolation with their mother until authorities receive their results.

“The three of them are all in very good health, and are remarkably finding it hard to believe they might have actually tested positive,” he said.

Mr Notaras said passengers on the flight, which touched down on Australian soil at 9:51am on Tuesday, were immediately transferred to the Howard Springs quarantine facility, where they will now all be monitored.

“We expected this from the very beginning, we will ensure through the strict surveillance, and indeed quarantine methods that there is no chance of any further spread,” he said.

“The good news is that the arrival was at RAAF Darwin – a decision we made to ensure there was no mingling with the domestic flights arriving.

“The surveillance mechanisms we use are internationally acclaimed and we are keeping a very close watch on every single soul there.”

The case brings the total number of COVID-19 cases recorded in the NT during the pandemic to 35.