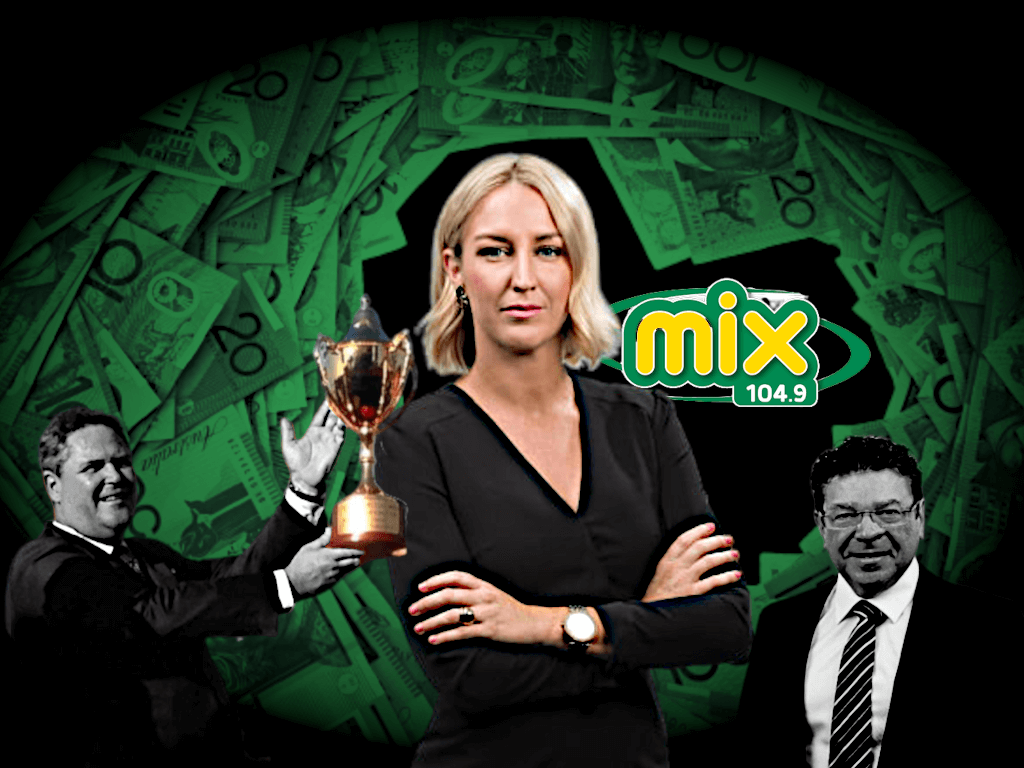 Darwin Turf Club chairman Brett Dixon wrote a “draft script” for popular radio presenter Katie Woolf three weeks before he was interviewed by her “that included Mr Dixon’s views and response to negative media stories” regarding the controversial $12 million grandstand project, the ICAC report into the scandal has revealed.

The alleged “script” has raised long-simmering concerns over commercial radio station Mix 104.9’s “sponsored segments” with NT Government officials, on the popular 360 program presented by Ms Woolf, that do not appear to identify the station’s commercial interests to listeners.

The NT Independent revealed yesterday that sources had confirmed former NT News editor Matt Williams is the alleged “senior media figure” referenced in the ICAC report, who allegedly used the NT News to provide favourable media coverage for Mr Dixon and the Darwin Turf Club while they were under public scrutiny for the alleged misuse of public funds.

According to anti-corruption commissioner Ken Fleming’s report, Mr Dixon emailed two Turf Club board members and its CEO on September 8, 2019 – a little over a week after the club sparked public outrage for awarding the $12 million taxpayer-funded grandstand tender to Mr Dixon’s construction company – to show them a “script” he had drafted that was intended for Ms Woolf ahead of a possible interview.

“This was a draft script intended for ‘Woolfe’ [sic] and included Mr Dixon’s views and response to negative media stories re Mr Dixon, Jaytex and the grandstand,” the report stated.

“And requesting that Ms Woolfe [sic] interview Mr Dixon on her radio show.”

The “script” was lauded by one board member as being “very good and fair”, the report stated.

The Darwin Turf Club is a large local advertiser for Grant Broadcasters – the parent company of local radio stations Mix FM and Hot100 FM, with advertisements routinely running on both stations.

Mr Dixon appeared on Ms Woolf’s morning news “talkback” program three weeks later on October 1, 2019, where he told Ms Woolf he had been the victim of unnamed “devious people” who had planted a “false narrative” around how his company Jaytex was awarded $12 million of public funds to build the grandstand.

The NT News ran an online story based on the interview, with a headline that suggested Mr Dixon’s feelings had been “hurt” over media coverage of the scandal and how he and the DTC board “did not deserve this”.

Ms Woolf did not respond to the NT Independent’s questions.

A request for the full audio of the interview was not acknowledged.

Station manager Mike Harvey denied in an email that the interview with Mr Dixon was “scripted or paid for”.

“None of the interviews conducted with the Darwin Turf Club, their Chair or Board have been scripted or paid for,” Mr Harvey said in a statement.

“Katie Woolf strongly rejects any suggestion that she has not acted in a highly ethical or professional and responsible manner.”

The NT Independent has not made that suggestion.

Commercial radio ‘must let their audience know’ if a sponsor has an interest in material being broadcast: ACMA

Questions remain unanswered, however, over how the commercial radio station handle advertisers, including NT Government departments and the Turf Club, when it comes to on-air interviews.

Mr Harvey and Ms Woolf were asked if interviews conducted last year with Department of Trade, Business and Tourism chief executive Shaun Drabsch – that promoted the NT Government’s stimulus measures during the initial COVID-19 lockdown – were scripted and paid for.

Mr Harvey did not directly address that question.

“The Department of Trade, Business and Innovation paid to have a segment run during the height of the COVID pandemic [last year] about the stimulus measures implemented to help businesses,” he said in the email.

“The segment was declared as a sponsored segment which is in line with ACMA – the Australian Communications and Media Authority.”

He did not respond to a follow up question asking him to clarify if the interviews with Mr Drabsch were part of the “declared” sponsored segment or if the station has a policy to “go soft” on big advertisers in interviews, such as the Darwin Turf Club and NT Government departments, without declaring their commercial sponsorships.

ACMA Chair Nerida O’Loughlin said earlier this year in relation to that matter that licensees and presenters across Australia “must let their audience know if a sponsor has a commercial interest in material being broadcast that is directly favourable to the sponsor.

“These rules exist so that audiences are properly informed and are able to make up their own minds about what they hear on commercial radio.”

Ms Woolf is a highly-regarded local radio personality, taking over the reins of the venerable 360 program from former host, the late Pete Davies in 2015.

She has routinely read voice-over ad placements for the Silks lounge in recent weeks, celebrating its one-year anniversary, during her show.

Ms Woolf’s program has a history of taking its editorial cues from the NT News, reading stories verbatim from the Territory’s only daily print newspaper with little scrutiny applied.