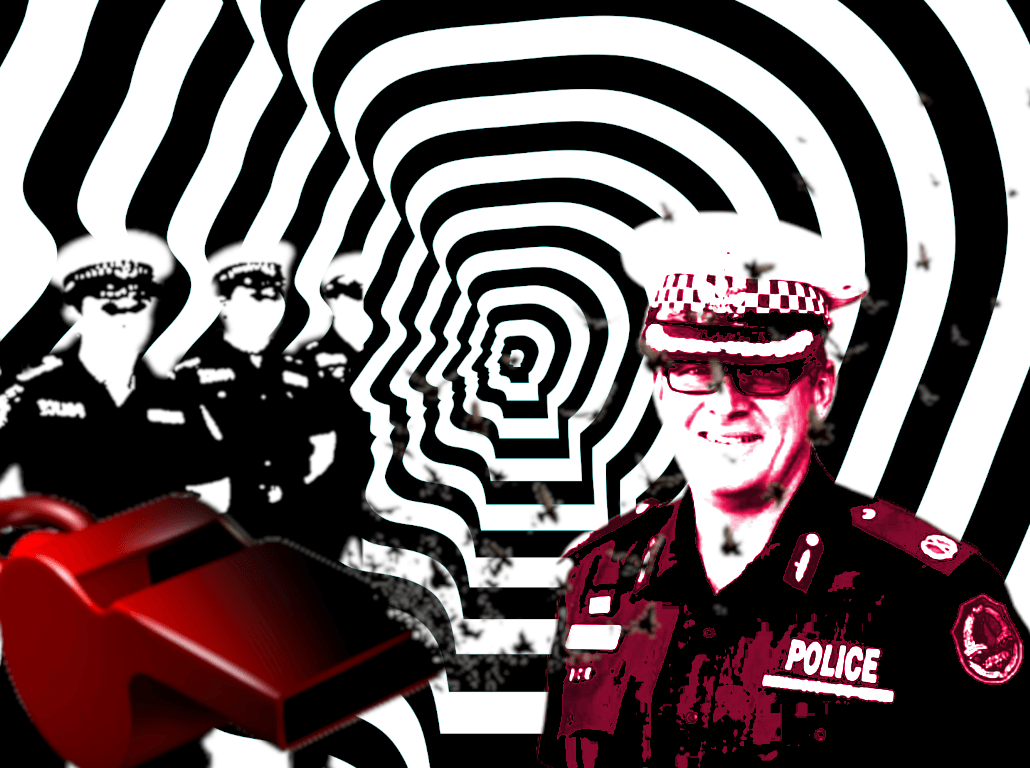 Police commissioner Jamie Chalker has confirmed the NT Police have launched an official investigation into the NT Independent – an online publication its executive does not respond to – after a series of articles exposed massive failures by the police brass, including sexual assaults not being publicly reported and the police college using unqualified instructors.

Mr Chalker confirmed the investigation at Estimates hearings after being asked by independent MLA Robyn Lambley if police were investigating leaks to the NT Independent.

“If a criminal offence is occurring, then I believe it’s appropriate that we undertake an investigation and the unlawful release of information, that is information that is not lawful to release, is a criminal offense,” he told Estimates.

“I’m quite confident that if the NT Independent has no criminality to be concerned about, then it shouldn’t be an issue that should cause them any concern.”

The NT Independent launched last year with a focus on investigative journalism that has exposed the NT Government and police to greater public scrutiny.

Chief Minister Michael Gunner banned the publication’s reporters from attending government press conferences last year and ordered the apolitical public service not to release information to the NT Independent. Both of those actions violate the MLA Code of Conduct.

The NT Police brass has also played along, refusing to comment to the NT Independent despite being afforded the right of reply for every story the online paper has run concerning police.

“We knew we’d be ruffling a few feathers when we started the NT Independent, but this is ridiculous and a blatant assault on the NT’s democracy,” he said.

“We stand by all of our stories and will fight tirelessly to keep our sources safe – protecting whistleblowers is our top concern.

“The police should be fixing their failures rather than using valuable taxpayer resources to pursue a witch hunt to find out who blew the whistle on their incompetence.

“I would like to remind the NT Government and the police executive that journalism is not a crime. We don’t live in a police state where they can threaten and intimidate the media because a story embarrassed them. Territorians expect more from their police service.”

Multiple sources had informed the NT Independent about the operation and the publication was in the process of producing an article when Mr Chalker confirmed it to Estimates today.

Those sources, and one well placed outside the police force but inside government, told the NT Independent they believed the police executive could be trying to access phone records of editorial staff in an attempt to catch sources. Several have also raised the possibility police would be surveilling editor Chris Walsh, reporter David Wood and owner Owen Pike to see who they are meeting.

Yet another source said he was skeptical that would be happening but the executive would be working furiously within their ranks to flush out who is responsible.

Three weeks ago, a group of sergeants were told anyone found speaking to the NT Independent, and allowing vital information to be made public, would be sacked, one source told the paper.

Another source, who praised the NT Independent for the information that has been brought to light and the way in which it had been reported, said there was an operation to stop the embarrassing internal workings of the executive becoming public.

“There’s a full operation on now to find the source or sources,” they said.

“They will be doing everything in their power including misinformation campaigns to locate and determine the source.”

Multiple sources have told this paper senior management would purposely be providing false information to officers, or information with mistakes to see if they are included in reports.

One of those sources echoed that view and said people providing information needed to be careful.

“I have no doubt they are using classic misinformation, counterintelligence like putting out broadcasts with misspelt words and things like that, that someone will take a photo of, and then they will be able to determine who is the the leak,” they said.

“So I think they will have data up on your phones seeing who is messaging you on your ‘open lines’.

“It wouldn’t surprise me if they have surveillance following you. See if you meet with any NT Pol members.

“So he wouldn’t mind at all. You would need to satisfy the Ombudsman of the need to do it and I’m sure they wouldn’t be able to provide satisfactory reasons.

“I have to be real careful.

“It makes me sick. You guys are the only ones who want to do investigative journalism and hold people to account.

“So you’re being investigated for doing your job? What a disgrace. I hate this government and this police executive.”

‘There will come a time someone will die’: How trying to block information has made the public less safe

The police executive had previously put in place measures in an attempt to stop the NT Independent’s reporting from internal leaks.

In March, this paper published a series of articles exposing how alleged rapes, and sexual assaults, including of children, had either been not made public soon after they had happened – even in cases when the alleged offender was still at large – or the sexual part of the assault had been hidden, and in one case, the executive had not made public the alleged rape element of a break-in, only describing it as a break-in and robbery.

In response, the executive stopped shared access to daily lists of major crimes created by detectives, known as running sheets, which include the dates, case ID, case officer, the arrest with notes of what happened and the charges or probability of charges – shared between divisions that ensure investigations are not doubling up.

The crimes listed would include rapes and sexual assaults reported on by the NT Independent with whistleblower information.

They are also sent to all the executive, the media team and passed onto ministers, a source said. The source said “the only reason” the distribution of the running sheets would have stopped was to stop the leaks to the NT Independent.

“No running sheets again. This hasn’t happened for the past, at least, five years,” a source said in late March at the time when they stopped.

“And it just makes it worse for them, and means more police want the truth to get out there. This is disgraceful. The cover ups continue. I’m sure they’d say it was a ‘technical issue’.

“We have offenders committing offences and three different areas investigating the same person and no one has any idea what the other team is looking at.”

Yet another source said now “no one knows what anyone else is doing” and described the action as “fucking ridiculous”.

“They were a copper’s bread and butter, knowing who’s who in the zoo,” they said.

“Detectives put in running sheets, any significant jobs, ‘management significant’ jobs. Stuff that was going to hit the media.

“It still goes to the bosses but now no one else gets it.”

The executive also stopped bulk text messages that are sent out en masse asking general duties officers for volunteers to fill shifts and do overtime when there is a shortage of officers, after the messages were published on the Gumment the Lover Facebook page, run by NT Independent owner Owen Pike.

Sources said this led to officers on duty having to text their mates to see if they would come in for extra shifts and often times, those officers having to do double shifts after their messages were ignored.

“I believe the day is near where you call the police and no one will come,” one source said at the time

The ABC reported at the time that police had found the officer and he had been disciplined for breaching the Police Administration Act by leaking. However the leak was revealed by the NT News to be political and came from the Henderson Labor Government’s fifth floor “dirt” operatives.

A police source told the NT Independent an affidavit would have to be signed by police alleging either Walsh or Wood had committed a crime to be able access phone records and it would have to allege a serious crime committed by them.

“There is probably not much chance of accessing your phone records, unless they lie. And there is a lot of lying going on,” they said.

“They would have to lie about what you are doing wrong. They can say you are involved in corruption or sexual assault.”