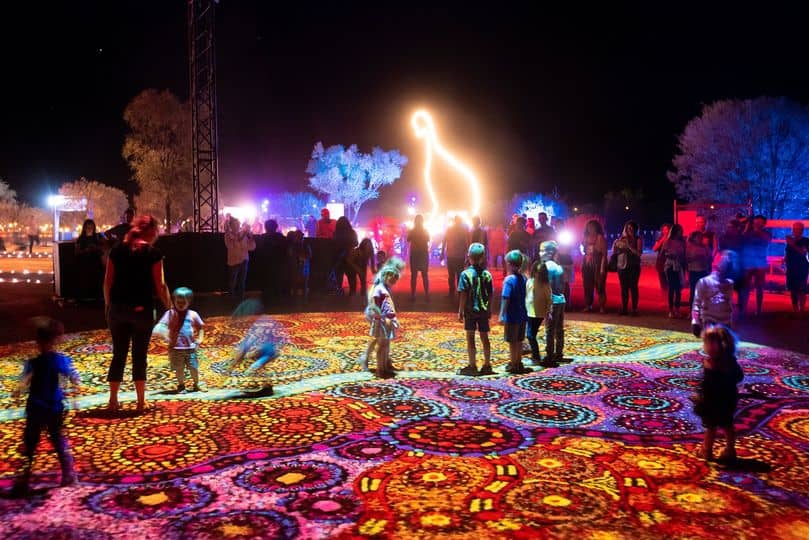 Organisers of the Alice Springs Parrtjima festival have been forced to move planned events out of the Todd Mall again due to ongoing public safety concerns around crime in town.

The live events will now be held at the Desert Park – a move the organisers also made last year after a car was driven through the mall and reports surfaced of rock throwing and windows being smashed.

NT Major Events director of engagement and culture told ABC Radio Alice Springs that organisers were concerned about safety issues at the mall.

“We need to be mindful of events that might happen,” he said. “We’re working with town council at the moment to put in some mitigation.

“We won’t have events there as such, but we will have one of our static displays in there.

“I know it’s pretty difficult at the moment but we can only work towards positive things and try and develop an environment where we can do things like that.”

Last September, organisers moved all events from the mall following reports of multiple cars being driven driven through the highly populated mall at “high speed” following the screening of a movie.

The government ignored that incident and others, claiming the reason for relocation was overcapacity issues.

However, Chief Minister Michael Gunner later admitted a car driving through the mall had raised serious safety issues and resulted in the events being moved.

CLP Major Events spokesman Josh Burgoyne said the forced relocation of the festival again this year is further evidence that Alice Springs out-of-control crime problems are not being properly managed by the government.

“The Gunner Labor Government has been on autopilot when it comes to crime,” he said.

“The Chief Minister is refusing to meet with affected residents and businesses owners and refusing to listen to their concerns. Now, because NT Labor can’t get a handle on this escalating crime wave, the Alice Springs community – and tourists – are suffering, once again.

The festival had been marketed by the Gunner Government across the country in recent days as part of its domestic tourism campaign aimed at helping get the stagnant NT tourism industry moving again.

Mr Burgoyne said there were mixed messages from the government.

“On one hand the Minister for Tourism, Natasha Fyles, has been spruiking Parrtjima as [a tourism draw card] but on the other hand, can’t guarantee community safety for a public event,” he said.

“The community is crying out for immediate action.”

Parrtjima – A Festival in Light is a free 10-day festival showcasing Indigenous culture with art, light shows, films and live music. It is scheduled to run from April 9 – 18.