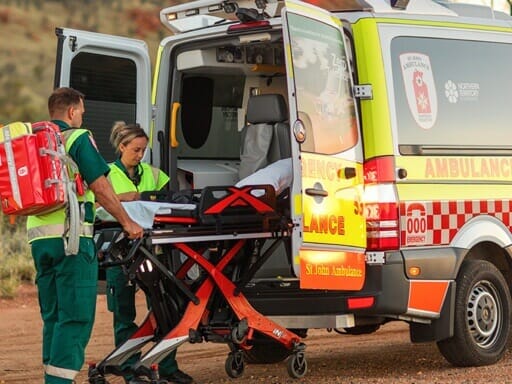 Other conflicting reports indicated there was more than one person who assaulted the paramedics.

Around 4pm, Police said St John Ambulance paramedics responded to a report of an injured person at the intersection of Rothdale Road and Sawyer Street.

NT Police said while the paramedics were providing treatment, a single female approached them and pulled off their personal protective equipment.

The female then allegedly punched and scratched the paramedics to the head and face.

However, a source familiar with the incident said there was more than one female who assaulted the paramedics.

It is unclear why the police are only reporting the one woman and seeking the public’s help to locate her without a proper description.

Watch Commander Kaye Pemberton said inquiries are now underway to identify and locate the one female.

They did not provide any details on the physical traits of the female they were looking for or her estimated age.

Cdr Pemberton said assaulting emergency workers who are providing care and protection to the community is completely unacceptable.

NT Police urge anyone who may have witnessed the assault or have dash-cam footage of the incident to contact them on 131 444 and quote reference 9912374.

In February last year, a female paramedic responding to a patient ended up being the one requiring medical attention after she was allegedly kicked and punched to the head in the back of an ambulance by an alleged teenage drug addict in Palmerston.

Physical assaults made to paramedics had a whopping 73 per cent increase from 2019 to 2020, according to data from St John NT. There were 71 reports of assaults made in 2020, while there were 41 incidents in 2019, including verbal assaults.

“It is often under reported because it happens so regularly,” Mr Thomas said.

United Workers Union NT secretary Erina Early also said in 2021 that new paramedics in the NT were reporting more incidents of aggression, compared with their previous two years of work in southern states.

“We need to be aware that the figures do not reflect the true data, most paramedics and patient transport officers do not report their assaults,” Ms Early said.