‘Our town is in crisis’: Alice Springs Mayor makes urgent plea for help with out-of-control crime 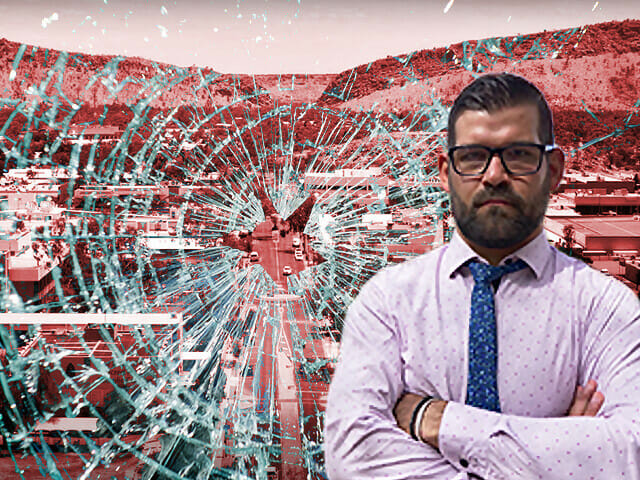 Alice Springs Mayor Matt Paterson has sent a letter to federal and Territory political leaders calling for help with the town’s escalating crime problem, which he says has put the community “at breaking point” with residents living in constant fear in their own homes.

“Currently, every day, residents are having their businesses destroyed, cars stolen and smashed, houses broken into and are being assaulted walking to their cars from dinner,” he wrote.

“This is not an exaggeration. Intruders are breaking into people’s houses, getting into young children’s bedrooms while they and their parents sleep. People no longer feel safe in their own homes. We’ve had tragic deaths and near misses as a result of crime in our community.

“Frankly, we are at the end of the road.”

The letter followed a council meeting on Tuesday, in which the entire council declared the level of anti-social behaviour in Alice Springs at a “crisis point”.

“There is no other way to describe it, our town is in crisis,” Mr Paterson wrote.

“This letter isn’t about politics. Quite frankly, I don’t care on which side of the political aisle you sit on.

“I am reaching out because something needs to change immediately. I’m fed up, business owners are fed up and our residents are fed up. I don’t have all the answers, but I truly believe collaboration is the key to success.

“The entire community, all individuals and our institutions must work together if we are to succeed. Please accept this as an invitation; I am urging you to come to Alice Springs to witness this first-hand.”

Mr Paterson added that politicians need to visit Alice to “feel and hear the palpable fear of our locals”.

“I am sending you this letter because I believe you can help us get Alice Springs back to the amazing place it once was and I believe can be again.”

Chief Minister Michael Gunner has faced furious criticism from Alice Springs residents for his failure to address crime in the community, which made national headlines after A Current Affair broadcast a piece on the out-of-control crime in town that was viewed by millions of Australians last March.

After the report aired, Mr Gunner said he would take a trip to Alice Springs but was non-committal about meeting with former mayor Damien Ryan or other community leaders about the crime problem. He told ABC Radio at the time that he would be meeting with community groups and would doorknock the community if he had time.

But Mr Gunner was seen leaving the town without meeting anyone to discuss the crime problem on the same day he arrived.

The NT Independent revealed last week that police in Alice Springs are currently grappling with a critical staffing shortage due to resignations and increased demands on officers during the COVID-19 lockout, that has seen senior crime detectives stationed at bottle shops, instances where only one crew of officers is patrolling the community at a time and other issues relating to day-to-day operations.