‘Once you drive a bobcat onto Parliament lawn everyone goes berserk’: Activists on trial for ‘drilling’ at Parliament House 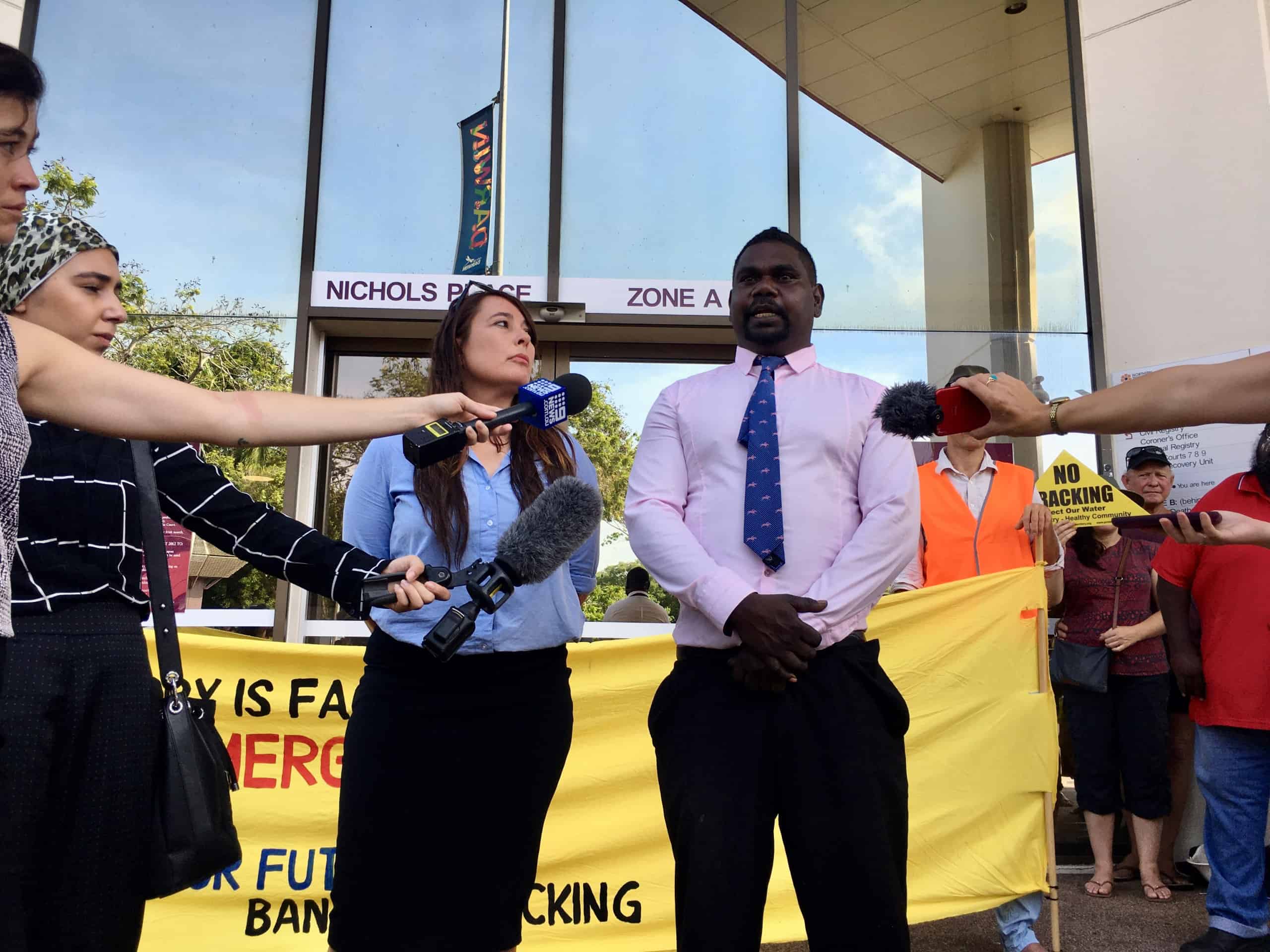 More than 50 anti-fracking protesters have rallied outside the Darwin Local Court this morning ahead of a two-day trial which will see two activists plead not guilty to charges of criminal damage involving drilling on Parliament lawns in April 2019.

“We’re standing here after a year long pursuit by the Northern Territory Government who wants to charge us for criminal damage,” one of the defendants, Lauren Mellor said in an address to the crowd.

“[Over] actions that involved drilling less than one inch of a depth of a hole on [NT] Parliament lawns that recovered itself within days.

“Yet at the same time the actions that we were protesting by the fracking companies are destruction on a scale that could impact our global climate.”

Across the two day trial, prominent Darwin human rights lawyer John Lawrence SC, acting for the defendants Ms Mellor and Conrad Rory, said he will bring expert witnesses to argue the actions of the group of protestors were justified in the context of the risks fracking presents to groundwater and the climate.

“The outcome of this case has important ramifications for the future protection of land, water and our climate,” Mr Lawrence said.

“These are actions taken by people of principle who are genuinely concerned about the destructive effects that fracking poses to land, water and future generations of Australians.” 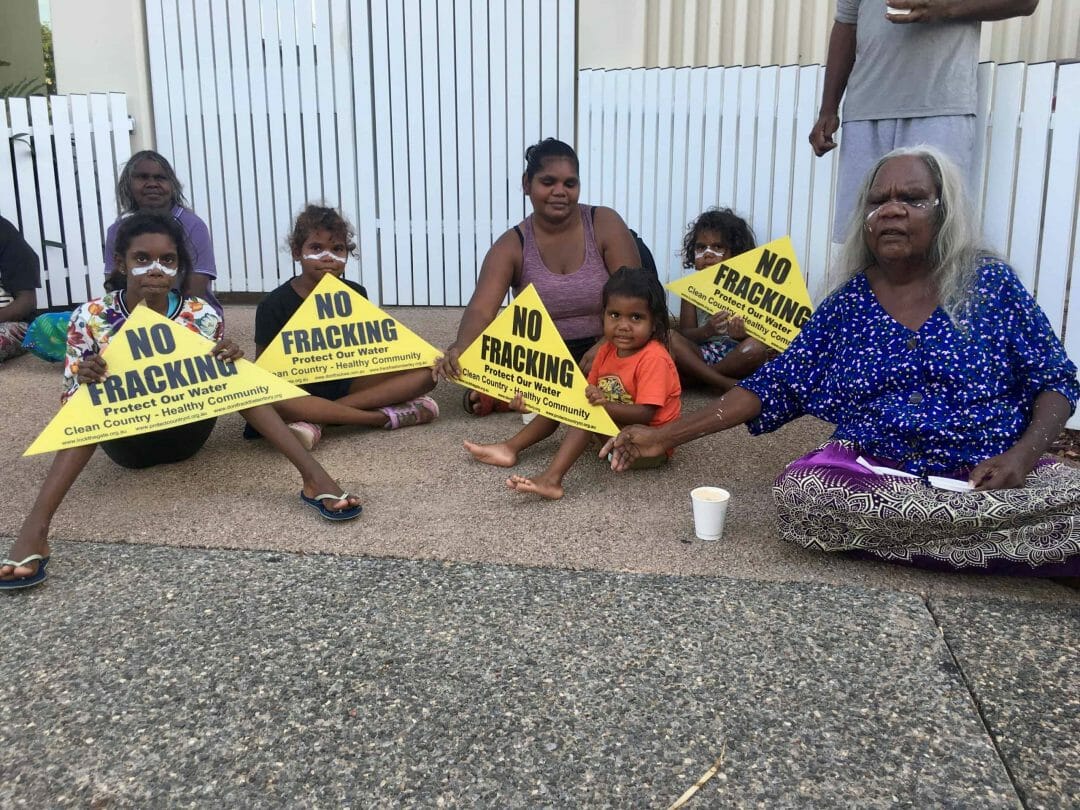 Defendant Conrad Rory had the support of family members who had travelled from Borroloola.

The defendants were charged last July after they protested alongside Indigenous elders and Traditional Owners from regions targeted for gas exploration on April 16.

Traditional Owner from Borroloola, Conrad Rory, said he is willing to go to jail in order to protect his family and land from giant mining corporations.

“Our voices were not being heard by the NT Government, we had to get our message across and make a point,” he said.

“We felt betrayed and frustrated.”

Against a backdrop of support from family members who had travelled from Borroloola, environmentalists and business owners in staunch opposition to fracking, Mr Rory argued that if protecting water made him an activist, “water poisoning by large corporations was an act of warfare.”

“I’m not sure what the verdict will be, but either way I know I’m doing the right thing protecting my family,” he said.

Speaking in front of the crowd, Mr Rory called out the hypocrisy of government and corporations, claiming “no one cares what happens out there”.

“They come out to the bush and frack our land, destroy everything,” he said.

“Once you drive a bobcat onto Parliament lawn everyone goes berserk – and you’re charged as a criminal.”

Rachel McDinny is a Yanyuwa/Garrwa woman originally from Borroloola who now lives in Darwin. She cited fears for the future of her family who still live in the remote region. 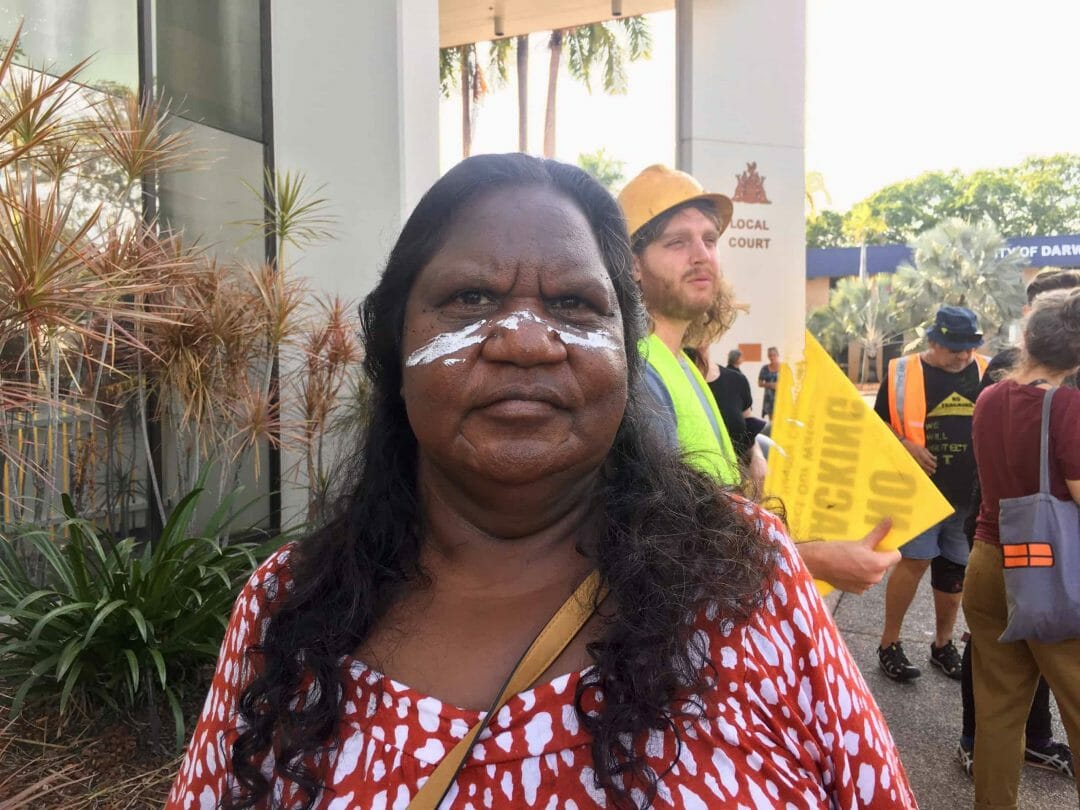 Yanyuwa/Garrwa woman, Rachel McDinny said she was against the charges laid by the Northern Territory Government.

“People don’t want to leave their homes, they have strong connections to history and stories, but if fracking goes ahead, it is likely they will be forced to,” she said.

She said she shared the widespread frustration felt by many at the court house today.

“We are not being listened to, yet we are the ones that voted [government] in. Communities want fracking stopped on their land… water is everything, it feeds plants, animals and humans and it’s all in jeopardy.”

Darwin tourism operator, Rob Woods said he hoped the trial highlighted the defendants’ activism was in the interest of the public.

“It is a pity our so-called justice system has people who are actually trying to fight for the public, environment and the future generations, finding themselves in front of court instead of a crowd applauding their actions,” he said.

The owner of Ethical Adventures NT criticised the government for taking punitive action against people who were protesting against an industry that “isn’t accepted by the population, isn’t a good thing for the future and doesn’t have the permission of the people whose land they are going out on”.

“As a local, as a tourism operator, as a business owner, as a father, and as a member of the public, we say no to it,” he said.

Ms Mellor, one of the Territory’s most prominent anti-fracking voices, said it was imperative the young people who had rallied today understood it was the NT Government “that is giving permission and bank rolling [gas] companies… to destroy beautiful parts of the Territory”.

“We’re not guilty of criminal damage, unless the fracking companies are guilty of environmental vandalism on a global scale,” she said.

“The scientific consensus around the risks of fracking to public health, to our environment and to our climate is extremely clear.

“We know the damage it will do and it was on that basis that we took the action we did.” 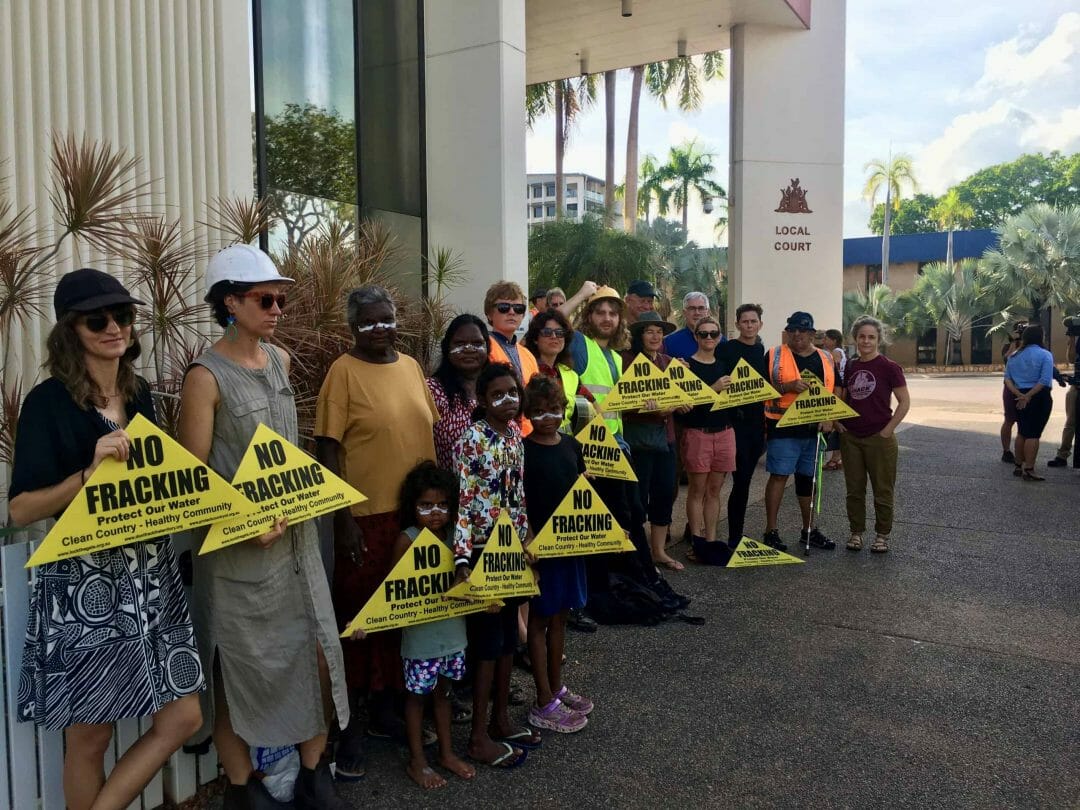 More than 50 people gathered a Darwin’s local court this morning to support activists on charges of damage.

Ms Mellor said that after years of protests by Traditional Owners, pastoralists, and environmentalist young and old, thousands of submissions of objection to the fracking industry and experts laying out the evidence of harm, the activists felt they were left with no other option other than “to highlight the dangers of fracking right on the doorstep of decision makers”.

“It was to show them what unwanted drilling on your land looks like.”

Ms Mellor said she intends to fight what she labeled as “petty charges” against a backdrop of a climate emergency which is impacting Territorians on a daily basis, and instead called on the citizens to raise their voices.

“These charges won’t intimidate us,” she said.

“We call on fellow Territorians who are deeply concerned about this industry to raise your voices, to steel your nerve and escalate protests until we achieve the ban the Northern Territory Government needs to enact.”

A verdict is expected to be handed down tomorrow.