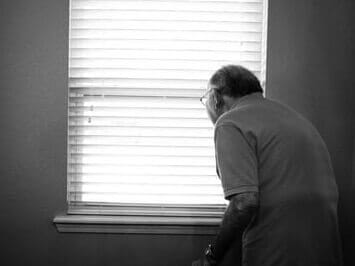 Northern Territory Chief Health Officer Dr Hugh Heggie’s new restrictions on visitors from Brisbane and the Gold Coast have prompted concerns among the elderly, who say they no longer feel safe, while raising questions over how coronavirus hotspots are officially declared.

Over the weekend, following a gradual rise in cases of COVID-19 in parts of Queensland relating to an outbreak at Wacol Correctional Training academy, the NT declared people arriving from these areas would be banned from visiting aged care facilities and remote communities.

But Dr Heggie stopped short of declaring the areas as hotspots, which would have required those arriving in the NT from those areas to quarantine for 14 days.

While the new rules have been met with fears from the aged care sector, Dr John Hall, president of the Rural Doctors Association of Australia (RDAA) said the new rules hit the sweet spot – both minimising risks for the NT’s most vulnerable while allowing free movement across borders.

But the government has been unable to explain how the new restrictions will be enforced.

Dr Heggie’s decision has also raised the issue of states and territories not having an agreed definition of what a coronavirus hotspot actually is.

No longer the safest place in Australia: NTCOTA

NT Council on the Aging CEO Sue Shearer said the Northern Territory was once perceived by the elderly as the safest place in Australia.

But the new regulations on visitors from Queensland have raised concerns.

“But what is worse, closing the borders now or seeing the virus spread across the NT and having to shut down completely?” she said.

“The 30-35,000 cohort of over 60s in the NT were very happy with the safety here, but they are now telling me they feel quite worried and unsafe.”

Despite health officials stating the NT is well placed to handle COVID-19, Ms Shearer said, “because the chances of an outbreak are high,” concerns over the welfare of the elderly remain elevated.

“I am hoping that people coming from Brisbane will be able to have viewing time with their family here in aged care,” Ms Shearer said.

“We know how fast people with dementia can deteriorate if they don’t see their family and loved ones.

“We are trying to see both sides of the decision and sometimes economics and health restrictions clash, but the NT has a bright future, we are on the right track, let’s keep it safe.”

‘We need to accurately define what a hotspot is’: Rural doctors association

President of the Rural Doctors Association of Australia Dr John Hall said that while numbers of cases in Queensland remained “quite low” he supported the Chief Health Officer’s new restrictions.

However, the unclear definition of a hotspot was confusing the matter, resulting in serious concerns for people accessing healthcare, in particular.

“We’ve seen that blanket ridged borders can have some monumental consequences. We saw in QLD and NSW three or four individual cases where people were not able to cross a border to access vital health care which really impacted those families.”

He pointed to data from the UK showing that for every COVID-19 death there were two non-COVID-19 related deaths, “because of certain barriers in place and people feeling too scared to go to hospitals.”

“We are seeing that [in Australia] too,” he said.

Rather than closing borders, a more effective approach would be to manage hotel quarantines and increase testing and contact tracing, Dr Hall said.

“We need to accurately define what a hotspot is, and the National Cabinet is working to do that, but right now, all the QLD Government is doing is publicising a long list of where COVID-19 might be.”

“A hotspot by definition is where there is active community transmission.

“If people in the community were compliant in staying home when they had COVID-19 related symptoms and there were better government policies in place, that would be a better way of containing the virus.”