NT Independent ban ends: ‘I should never have run from accountability. I am sorry, I was wrong’ 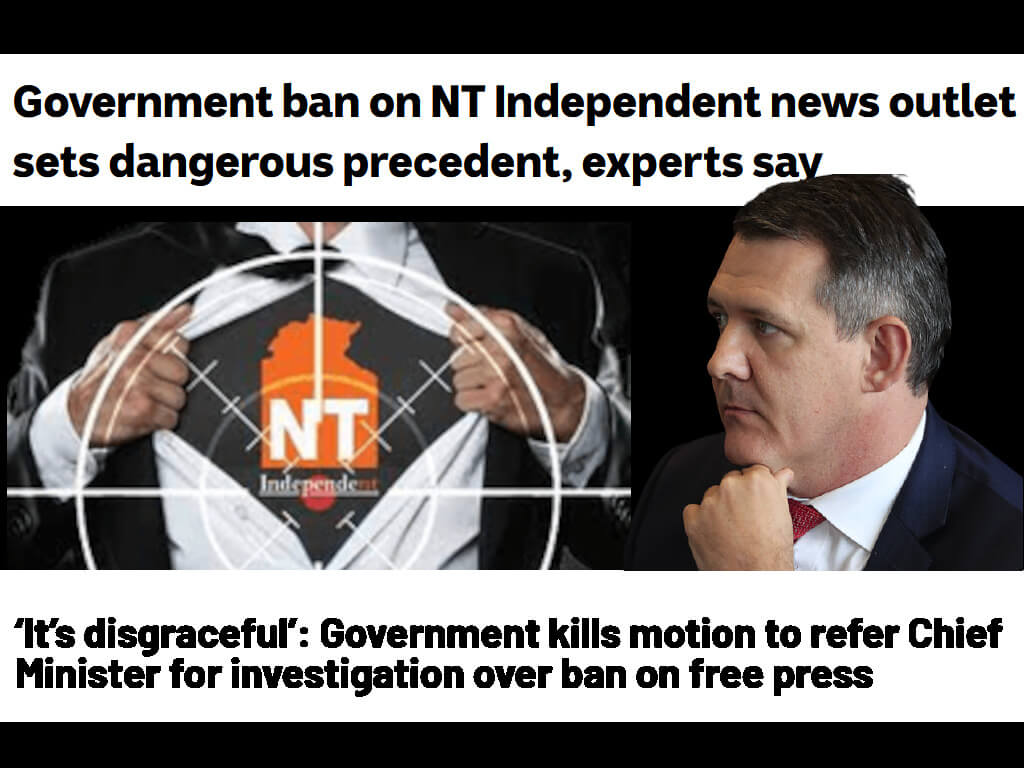 Chief Minister Michael Gunner has overturned the long-standing government ban on the NT Independent, stating the Territory’s corruption watchdog’s investigation into political interference had made him realise he’d “dropped the ball” on his promise of restoring integrity to government.

Mr Gunner famously ran from the NT Independent’s reporters weeks after the paper first launched, on a public wharf where a press conference was being held, but which Mr Gunner moved to NT Parliament where he instituted some sort of nightclub policy of not allowing the journalists in, despite their media accreditation from the Speaker.

“I am not proud of the fact that I couldn’t come up with a better lie in the moment about why I ran to my safe bunker from Chris Walsh. But to be honest, I was just scared shitless. But most of the media didn’t question my excuse at the time, and haven’t questioned it since,” he said.

“I feel like a weight has been lifted off my shoulders, and I don’t have to get someone to check lifts before I get in, or get my wife to look behind the curtains before I go into the bedroom to sleep, to make sure Walsh is not standing there waiting to ask a question I have no way of answering.”

At the time of running from scrutiny, Mr Gunner told the media who were allowed in, that he was holding the press conference in his office cupboard because he didn’t support web pages supported by hate pages.

“I really have egg on my face. I was more shocked than the Police Commissioner when I was told the NT News was owned by Rupert Murdoch, and some of the things he had done,” he said.

“Last year, I quite hypocritically said I believed journalists do a very important role holding people to account, myself included, and I believed they should have the ability to do their jobs.

“I can’t quite believe no one in the Northern Territory media questioned me on it at all, except the NT Independent. It was really just me testing what ridiculous shit I could get away with without question.

“But I do now believe journalists should have the ability to do their jobs. And hopefully my fear of Walsh will mean I do less dumb things.”

While the government will now allow the NT Independent to come to press conferences and ask questions of the departments, Mr Gunner said he would not be leaving his fifth floor office from now on, not even to get lunch, or have a sneaky durrie.

“As has been convention in the government I lead, when things get tough, which is everyday, I will just send Tash or Mano, ‘the girls’, out to take the heat from Walsh,” he said.

“But not Lawler, she is too much of a potential threat. Well, she was until, you know, the whole ICAC thing. I guess we finally have something in common.”

Editor’s note: This story was one of two April Fool’s Day stories we ran. The giveaway, our readers told us, was that it involved Michael Gunner apologising, taking responsibility for something and moving to fix a mistake. That simply does not happen under this government. Their assault on the free press, unfortunately, continues.