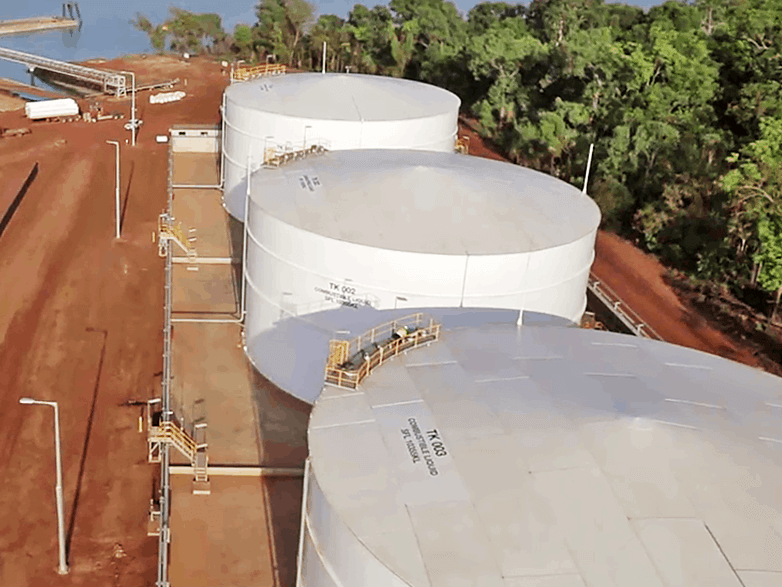 The Morrison government wants to bolster Australia’s long-term fuel supply through a $211 million investment in new domestic diesel storage facilities that could see a new facility built near Darwin.

With a focus on projects in strategic regional locations, the Northern Territory could be in a prime position.

“Not only does it keep Australia moving, the industry supports thousands of people across the country and this plan is also about helping keep them in work.”

At the beginning of the year, Australia spent $94 million on crude oil – the raw material that refineries use to make petrol, diesel, jet fuel and LPG – from the United States.

But as Australia raced through about one million barrels of oil — roughly 159 million litres — a day, according to Federal Minister for Energy Angus Taylor, a major concern was arising: processing and storage.

Playing a key part in the 2020-21 Budget, the plan to shore-up Australia’s supply of fuel into the future as international outlooks becomes more uncertain, the government will also be introducing financial enticements to keep refineries open.

COVID pandemic ‘having an impact’ on fuel industry: Morrison

The onset of the COVID-19 pandemic has exacerbated financial pressures on the domestic refining sector, Mr Morrison said.

“Like all sectors of the economy, the COVID-19 pandemic is having an impact on Australia’s fuel industry,” he said.

“The events of 2020 have reminded us that we cannot be complacent. We need a sovereign fuel supply to shield us from potential shocks in the future.”

In June, temporary changes to diesel standards were unlocked to Australian refineries allowing them to utilise excess jet fuel supplies, which Mr Morrison said would ease “storage pressures currently being felt by refineries from the drop in demand for fuel products as a result of COVID-19”.

At the time, Australia continued to have access to a reliable supply of fuel, but COVID-19 was highlighting the impact large, unexpected changes in fuel supply and demand could have on the fuel storage and refining sectors, Mr Morrison said.

The government is hoping to have the $200 million grants for new storage matched by state governments or industry, and says its focus will be on projects in strategic regional locations.

The NT has a fuel storage site located at East Arm, Darwin’s Industrial area just under 20 kilometres from the city centre.

In May, Federal Member for Solomon Luke Gosling lobbied the Federal Government for money for an additional fuel storage facility at East Arm, saying groups like NT Airport, the RAAF base and the transport industry would be keen to see a more central capacity.

Around the same time, AusGroup Limited, a subsidiary of NT Port and Marine, reached out to Federal and Territory Ministers to advise them that they have “immediate” capacity to store fuel reserves in Australia.

“The tanks have been recently constructed and have been used to store and service the commercial marine industry, land fuel requirements both industrial and community, and the oil and gas and defence sectors,” he said.

“We have engaged Federal and Territory Ministers since the commercialisation of the port and have made them aware on multiple occasions that we have the capability and capacity to support Australian strategic fuel storage requirements.”

‘Fuel is the lifeblood of so many sectors’: Taylor

Minister for Energy and Emissions Reduction Angus Taylor said the government recognised that Australia as a whole is heavily reliant on fuel, and that Australian refineries are under significant financial pressure.

“Almost all Australians are reliant on fuel and it is the lifeblood of so many sectors in our economy,” he said.

“Our farmers and miners rely heavily on diesel to do their jobs and provide services, while the transport sector sources 98 per cent of its energy from liquid fuels.

“That’s why it is critical that Australia has control over its fuel security arrangements and the government is making sure of that.”

He said the construction of diesel storage is expected to support up to 950 jobs and 75 new ongoing jobs, many in regional areas.

Mr Taylor said Australia was fortunate to have not had to navigate a significant supply shock in more than 40 years and said fuel security was essential for Australia’s national security.

“Modelling has shown that a domestic refinery capability is worth around $4.9 billion (over 10 years) in value to Australian consumers in the form of price suppression.

“The Government recognises that the future refining sector in Australia will not look like the past. However, this framework will protect Australian families and businesses from higher prices and will secure jobs in the fuel sector and in fuel-dependent industries, such as our farmers, truckers, miners and tradies.

“This domestically-focused package builds on Government action to purchase up to $94 million of crude oil at record low global prices to be stored in the US Strategic Petroleum Reserve for access during a global emergency.”