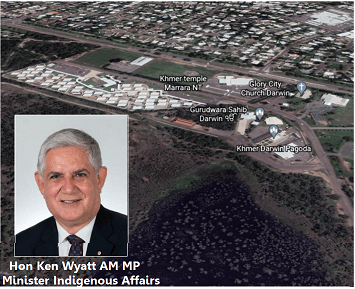 The Federal Government has announced it will contribute $10 million towards a lodging facility in Marrara for transients sleeping rough, as part of a $40 million deal that the NT Government has inexplicably kept under wraps.

The Gunner Government opened a 50-bed, short-stay facility on Batten Rd in Marrara back in May 2020 for remote visitors to Darwin, after previous plans to open a similar facility in the CBD were scrapped by Infrastructure Minister Eva Lawler.

Federal Indigenous Australians Minister Ken Wyatt said on Thursday that a Memorandum of Understanding (MOU) recently signed with the NT Government will allow for the development of a “new” $40 million accommodation facility at Batten Road.

But the Gunner Government has not publicly confirmed its part in the deal.

“Darwin is a significant regional centre and a lot of people come into town for medical appointments, meetings, visiting family and often can’t find suitable places to stay,” Mr Wyatt said in a statement.

“There is also a large transient population where people need safe short-term accommodation as well as support services to take the next step.”

He added that the “new precinct” will offer upgraded facilities for “short-term crisis and transitional accommodation”, as well as family-sized units, “providing more options to people passing through or struggling to find homes in Darwin”.

“There will also be administrative support and meeting rooms to offer services such as counselling, therapy or housing services.

“These wrap-around services will help individuals have a move comfortable stay and support them on their next step, either returning to Country or into more permanent accommodation.”

It is unclear why the NT Government has not issued any statement about the MOU or the $40 million facility.

It also remains unclear who would pick up the tab for the daily accommodation costs and if stakeholder engagement has occurred before the federal announcement.

In June 2021, the NT Government announced the expansion of the Integrated Homelessness Services and Supported Accomodation facility, also on Batten Rd, would have capacity for up to 450 people.

This facility was set up as a partnership with the NT Government, Yilli Rreung and Mission Australia, to house vulnerable Territorians during the Top End’s COVID-19 lockdown.

Construction on the new Marrara Darwin Visitor Accommodation Precinct is expected to commence in July 2022, after planning and consultation is completed, with the works due to be finished by December 2023.