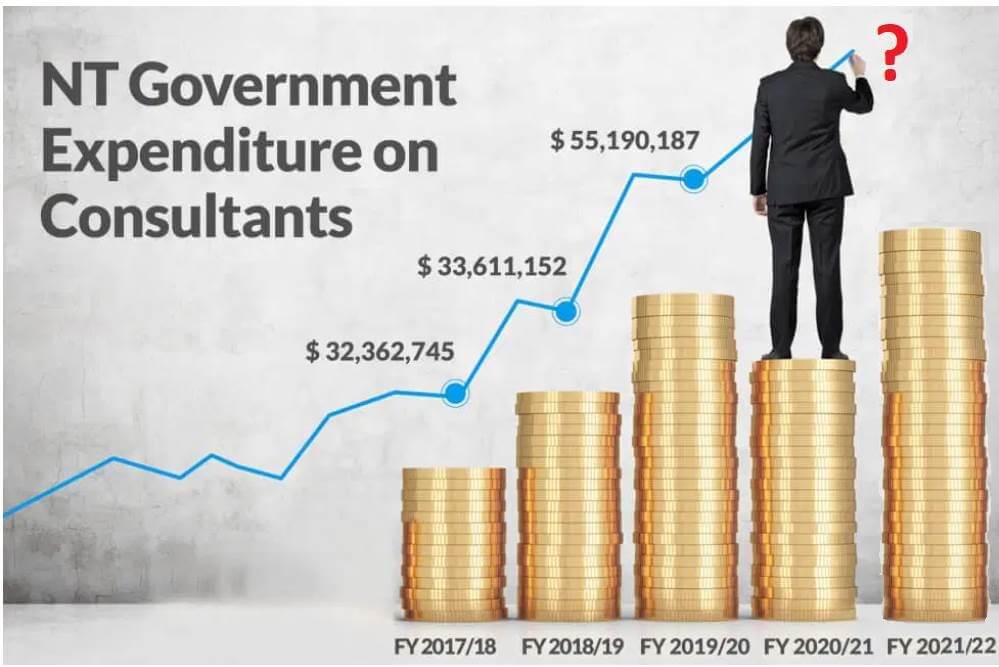 The Gunner Government has billed Territory taxpayers $77 million over the past 18 months to outsource general government responsibilities and internal decision-making to private consultancy firms, an NT Independent analysis has revealed.

Released NT Government figures show in the first six months of the current financial year, the government had already spent $29.2 million to December 30 on hiring consultancy firms through various departments.

That was roughly the entire annual average for all consultancy contracts just three years ago.

In 2019-20, the NT Government spent $47.6 million on private consultants, the figures show, which was down slightly from the previous year’s total of more than $55 million.

However, that figure was a massive increase over the 2018-19 figure, that saw consultancies cost taxpayers $33.6 million.

According to government documents, the Department of Infrastructure, Planning and Logistics led all departmental spending on consultancy contracts by a wide margin over the past 18 months, racking up $38.7 million in consultancy costs.

The much-maligned Power and Water Corporation was next, spending just over $12 million over the 18-month period, and the Department of Chief Minister and the Auditor Generals’ Office both charged $5.7 million each for consultants over the same period.

The figures released on the NT Government’s website state the value of the contracts at award date and do not disclose the growth of the contracts after award. Therefore, the actual figures may be much higher or in some unusual cases, could be lower.

Auditor General Julie Crisp told the NT Independent that her office has used outside auditors from six different local firms based on an “out-sourcing model” developed in 1982.

“The rationale for the outsourced model was to build local professional capacity and reduce the costs associated with employing and then terminating staff in order to meet the two peak audit periods in the year,” Ms Crisp said.

“There are over 100 authorised auditors who provide services to this office under the outsourcing arrangement.”

The $5.7 million contract figure is based on the awarded contract value listed on the government’s tenders database website for a 36 month contract for audit services awarded on October 2, 2020.

One consultancy contract sent to ICAC after multiple variations

In December, the NT Independent revealed a select consultancy contract between the Department of Health and Ernst and Young saw procurement rules violated to inflate a $700,000 contract to more than $4.3 million through variations.

That matter was referred to the ICAC by the Opposition and an independent MLA, after an Auditor General’s investigation was made public.

The debacle also raised calls for Health Minister Natasha Fyles to resign for lying to the public about how the contract was awarded.

Ernst and Young was identified as the unnamed company in the Auditor General’s report that was awarded a government contract in April 2020 under the pretence of a review into the government’s COVID-19 response, that quickly expanded to include a full organisational restructure of the Territory’s health system without going to public tender.

Editor’s note: This story was updated to include comments by Auditor General Julie Crisp in regards to her office’s use of private, out-sourced auditors.