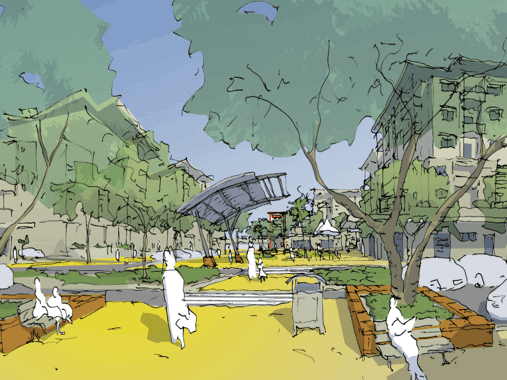 UPDATED: A major multi-million dollar tender for part of Nightcliff’s John Stokes Square redevelopment has in fact received interest from local companies, after a glitch in the NT Government’s system showed no bids had been received.

Tender T20-1056 for the residential component of the redevelopment, released by the Department of Infrastructure Planning and Logistics (DIPL), appeared to have closed on Wednesday without receiving a bid.

The tender was for the construction of three new four-story residential units for “complex needs” public housing – consisting of 66 one-bedroom and 12 two-bedroom units targeting seniors, people living with disabilities and carers.

But, apparently due to a glitch in the government’s tender system, actual submissions don’t display on the government system until mid-afternoon the day after the tender closes.

Later on Thursday, it was revealed that five companies had expressed interest in developing the residential facilities, which will also feature a multi-hub facility offering services for family violence, disability and mental health support.

The tender is part of the wider full development of the John Stokes Square precinct, worth $45 million, which includes a new police station and a pedestrian link between Nightcliff Village and Nightcliff Shopping Centre.

A stakeholder update released by DIPL this month said the contract to build the residential units is expected to be awarded next month, with construction expected to start “mid-2020”.

DIPL was contacted for comment over the apparent lack of interest in the project on Thursday, but declined to respond or explain the glitch in the system that shows closed tenders as nil interest on the day it closes until mid-afternoon the next day.

The contract to design the residential units was awarded to DKJ Projects Architecture Pty Ltd in November 2019.

Local contractor Halikos Group – who has submitted a proposal for the residential part of the project – was awarded the contract to design and construct the police station component of the project and began construction last month.

When announcing the redevelopment in 2018, Member for Nightcliff Natasha Fyles said the project was an “exciting and innovative investment”.

“The Territory Labor Government believes that Territorians have a right to public housing and to deliver safe and inclusive communities we need to improve the way we provide that service,” she said.

“This new project is expected to support hundreds of local jobs, providing a much-needed boost to our construction industry.”

EDITOR’S NOTE: This story has been corrected. The original story stated there were no expressions of interest on the project.