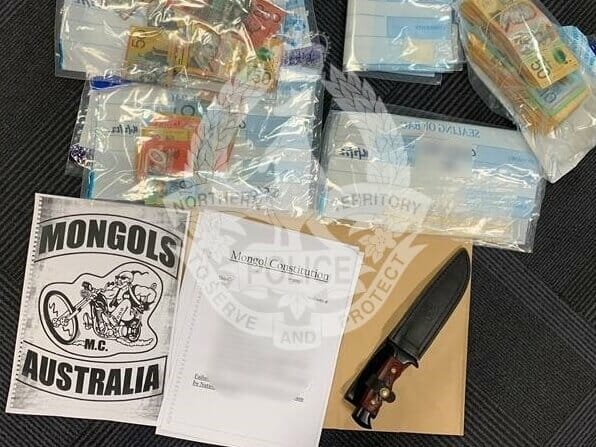 A man who was caught on CCTV intentionally causing damage to a vehicle in Stuart Park three weeks ago, has been arrested and found in possession of illegal drugs and weapons, NT Police said.

Authorities allege the 41-year-old man, who was found with Mongol bikie gang paraphernalia, caused “malicious damage” to a stationary vehicle on Coronation Street, which was reported as tyre slashing.

The incident happened on January 25, around 6:30pm and was captured on CCTV.

The man was arrested on Wednesday and authorities said they found illegal drugs, weapons, and fireworks in his possession. They also provided a photo that showed he had a copy of the Mongol’s constitution and a knife.

He was subsequently charged with criminal damage, multiple drug-related charges, possession or receiving property used in the commission of an offence, possession prohibited and controlled weapons, and possession of fireworks outside of approved period.

He is set to appear at the Darwin Court today.