Man injured in Pinelands explosion was attempting to put out fire 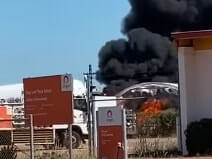 The man injured during a gas tank explosion at a Pinelands business on Sunday was attempting to extinguish the blaze when another blast inflicted burns to his face.

The tank explosion occurred at worksite repair facility Fuel Calibration Services on McKinnon Rd at around midday Sunday and was felt in nearby buildings.

Fire, police, and ambulance crews responded to the scene and brought a 45-year-old man to Royal Darwin Hospital.

The blast burned down a plantation, damaged various equipment, and shattered the windows of a nearby shed.

“It was a scary situation there when a gas tanker is on fire, you wouldn’t want to be anywhere near that,” he told Mix 104.9.

“The 45-year-old man did receive a number of injuries to his face … there was an explosion and he was impacted by that but not too seriously, thankfully.

“Paramedics were able to treat him and take him to the Royal Darwin Hospital where he is recovering from his injuries.”

Firefighters used two fire trucks and took around 20 minutes to bring the fire under control.

NT Worksafe Firefighters are continuing to investigate cause of the explosion.