UPDATED: A party of five, including two teens, who had been reported missing after their nondescript four-metre tinny with “little to no safety equipment” was last seen leaving Pioneer Beach at Bynoe Harbour on Tuesday, have been found alive, authorities said.

NT Police, who had been searching for the group and had held concerns about their safety, found them near Turtle Island around 1am Thursday morning.

All five had suffered dehydration and exposure to the sun but were otherwise in good condition, St John Ambulance paramedics said. 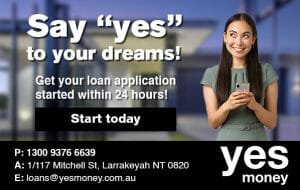 Police had earlier said they were searching for the vessel which is “believed to have no distinguishing features or markings on it and reported to have little to no safety equipment on board”.

It’s understood there was no EPIRB or personal safety beacon on board the boat which made the search more difficult for rescuers.

The ADF had also been involved in the search efforts.

Police reminded Territorians to always be prepared with supplies and an emergency beacon, even when taking short boat trips.

“This positive outcome was the result of a number of different public and private agencies working together and sharing resources under the coordination of NT Police search and rescue,” said Acting Sergeant Christopher Raeburn. “This situation could have very easily had a vastly different outcome.

“36 hours on the water is quite an ordeal, but all five are in good spirits.

“Even when heading out on Territory waters for a short trip, you should always be prepared by ensuring you have adequate supplies, clothing, equipment and a registered, working EPIRB.”