‘I live and die by the sword’: Aaron Pike taking on the ‘true test of golf’, the British Open 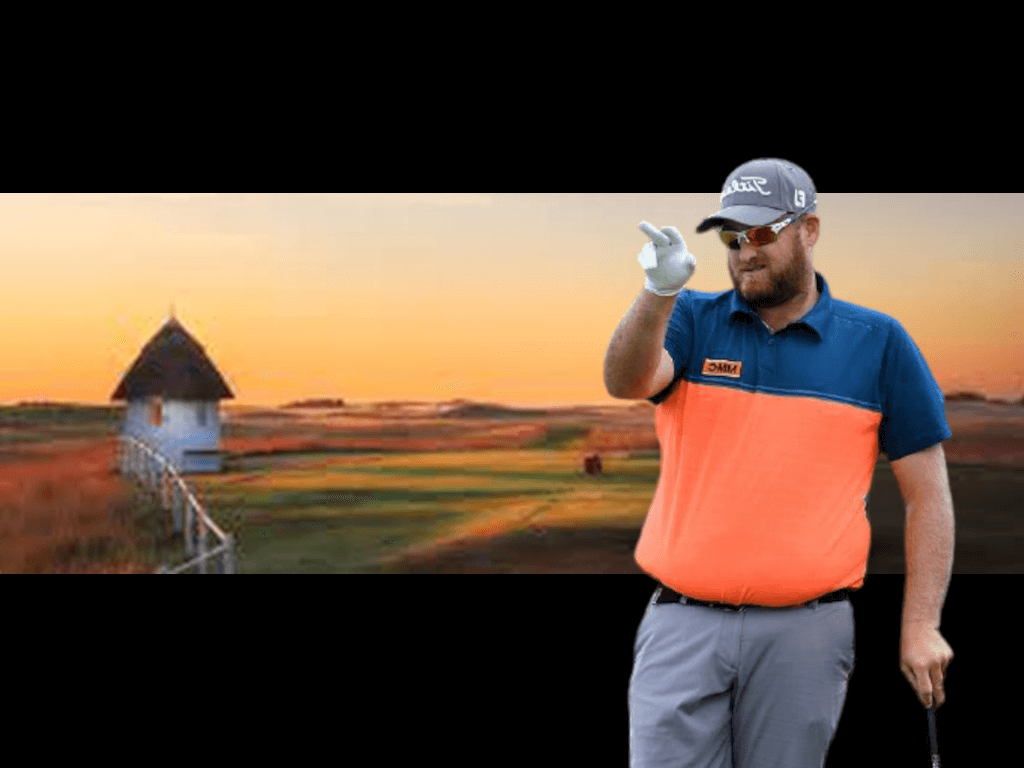 Darwin golfer Aaron Pike had passing thoughts of quitting the game that has meant everything to him but he had one thing to hold on to, his first appearance in a major golf tournament, and while he had to endure a year’s COVID-19-enforced uncertainty, he tees off in the British Open at Royal St George’s course in England today.

Northern Territorian Pike will finally fulfill one of his lifelong goals after the 149th edition of the oldest tournament in the sport was postponed last year due to the coronavirus pandemic.

“To qualify for a major the way I did was a great achievement, especially the Open, as it’s always been in my eyes the true test of golf as the original golf event,” Pike said.

Pike, 35, secured a spot in the third major of the calendar year after finishing third in the 2019 Australian Open at Sydney’s The Australian Golf Club.

He has also won two PGA Tour of Australasia titles, the Victorian PGA Championship in 2018, and the NT PGA Championship on his former home course, the Palmerston Golf and Country Club last October.

A chip-in eagle on the second hole at Palmerston Golf and Country Club was the key to victory that day. 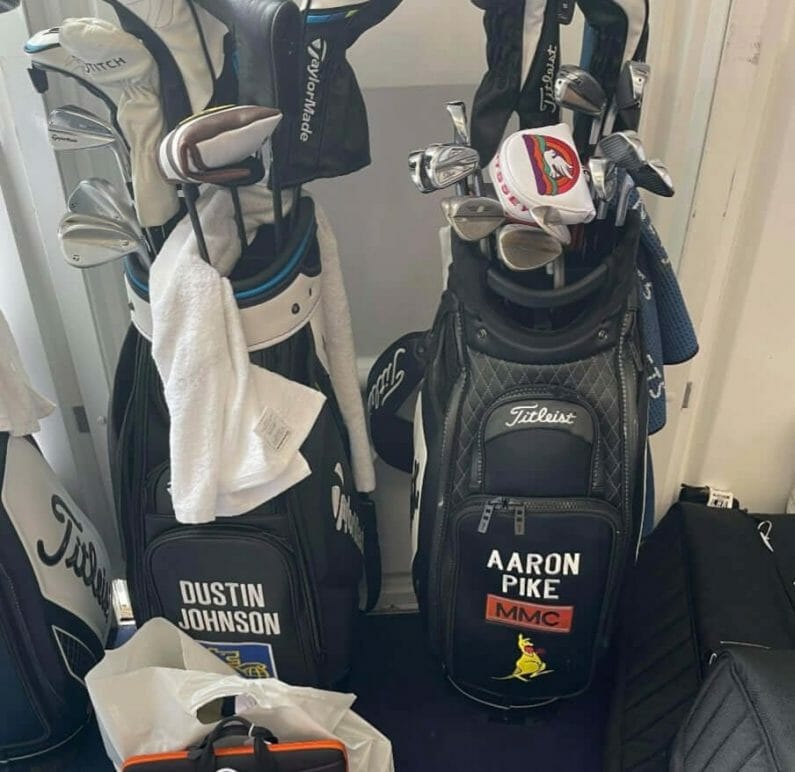 Aaron Pike’s bag next to US Open winner Dustin Johnson’s.

Last year Pike told PGA Australia the exemption into the field to contest the 2020 Open Championship came at a critical time.

“I do remember mentioning to someone that I would consider giving the game away if I didn’t have the British Open exemption,” Pike told PGA Australia.

“I won’t lie to you and say that I didn’t think about that but because of that British Open opportunity I never let myself get too far down that road.

“I’d worked so hard to get exemptions to final stages of Q Schools (annual qualifying tournaments), and it was really hard and a bitter pill to swallow [to have the British Open cancelled].

“In saying that, I turned myself out of that headspace pretty darn quick and then I put the feet on the ground and started putting one foot in front of the other and doing the things that I needed to do.

“Work my arse off but have no expectations.”

No Australian has claimed the Claret Jug since 1993 when Greg Norman beat Nick Faldo by two shots in the event that was also held at St. George’s.

While he describes the Shark’s triumph as one of his early memories watching golf, Pike has a fond recollection of the time Justin Rose chased the Open crown as an amateur in 1998.

The English-born Rose was 17 when he finished tied for fourth in that year’s Open Championship won by Mark O’Meara at Royal Birkdale.

“But the strongest memory I have is my older brother owned the official film from Royal Birkdale 1998, and I remember a young Justin Rose stunning the world to nearly win as an amateur.

The 2006 Australian Masters served as a big break for Pike, who years earlier was pondering golf or cricket as a career. He had only been playing golf seriously for five years when he upstaged his professional rivals at the Masters, equaling the club house record in the first round in a effort CNN described as a “flawless eight-under-par 64 to lead”.

Eventually, Pike decided it was best to use his golf clubs instead of a cricket bat.

“Realistically, the reason I chose to play golf came down to a choice as a 16-year-old to pick between cricket and golf, and it came down to one simple thing, golf is all on me,” he said.

“Ultimately I live and die by the sword, and I don’t have to rely on a teammate.” 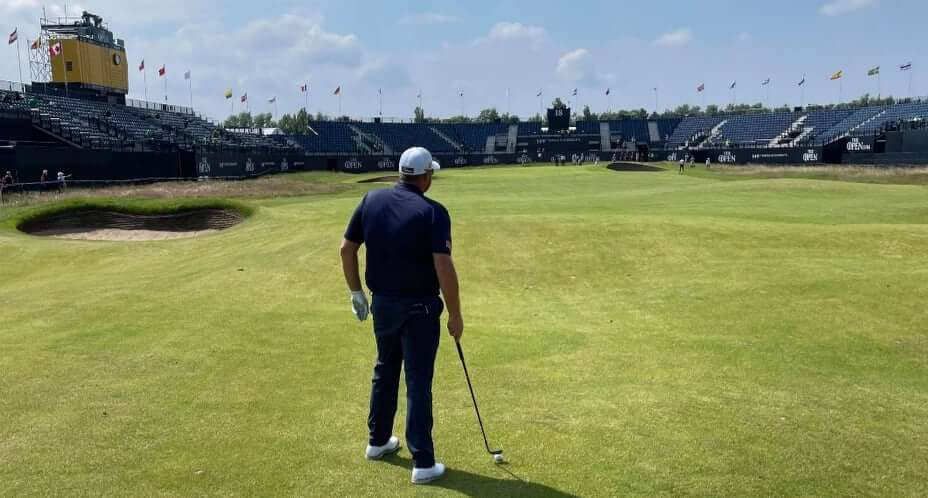 Pike taking it all in.

Getting to St George’s would not have been possible without guidance from his coaches, the icon on Palmerston golf and former long-time head professional Tony Albon and Queenslander Martin Gould.

“The people that have helped me get to where I am go back to the very beginning to my first coach Tony Albon at Palmerston Golf Club,” Pike said.

“He helped me more than he will ever know. And then from there, many people have been at my side, especially Martin Gould who has always been my biggest supporter.

“To be fair I could name fifty people here but those two stand out mostly, apart from my immediate family, who have been nothing but supportive from day one.”

By the time he tees off at St George’s, Pike will have to deal with the challenge of playing against the course.

“The main challenges this week are purely mental. The game is inside,” said Pike. “Mentally, the only way out of that is to change my approach. Harder done than said though.

“It’s always great to compete against the best, but ultimately I’m playing St George’s this week, not the other players.” 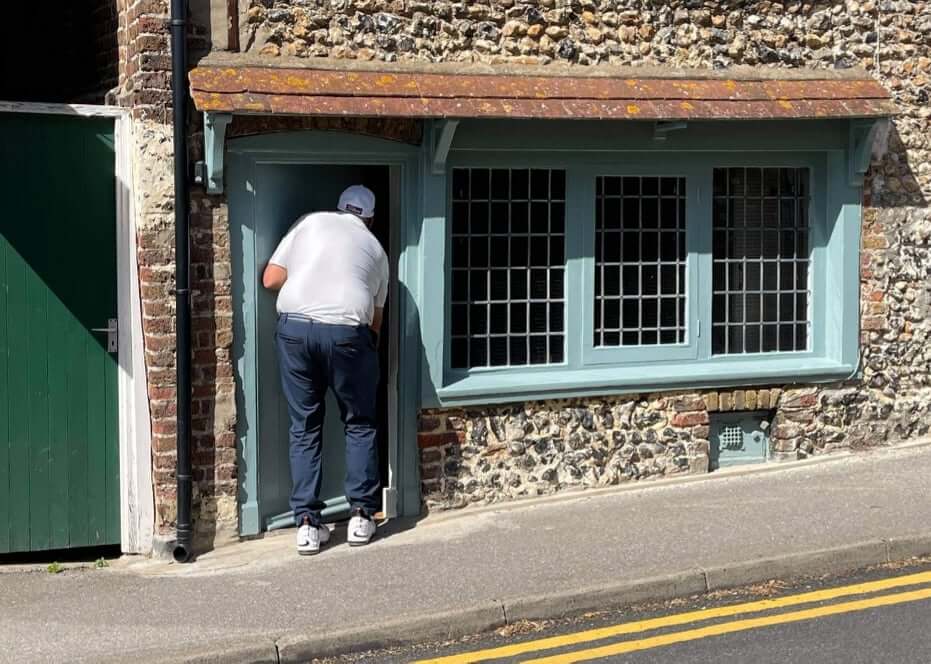 Pike entering a door that looks as if it was made for hobbits.