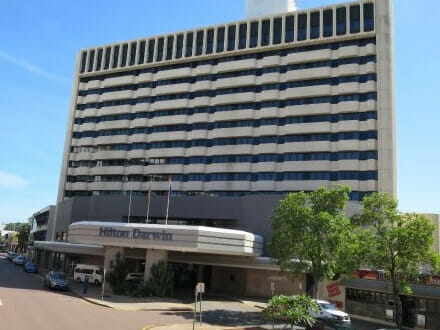 NT Police are investigating a false bomb threat that triggered panic among guests and workers at a Mitchell St hotel, NT Police said.

Police Watch Commander Siiri Tennosaar said around 6:40pm on Monday a Hilton Darwin hotel guest allegedly located a note in her room saying that there was a bomb inside the room.

Authorities immediately called for everyone in the vicinity to vacate the area.

“The Territory Response Group attended to clear the building. No bomb was found, and the guests were permitted to return to their rooms,” Cdr Tennosaar said.

She said the investigation is ongoing.

“We’re certainly looking for anyone who may have some information about that incident to come forward,” she said.

In March 2014, a bomb threat was also reported involving the NT House Building in Mitchell St.

The entire building was evacuated including the neighboring TIO building with some 400 plus employees forced out to the street. The streets were locked down during that time to allow the Territory Tactical Response Group to conduct a full sweep of the building which did not find anything.