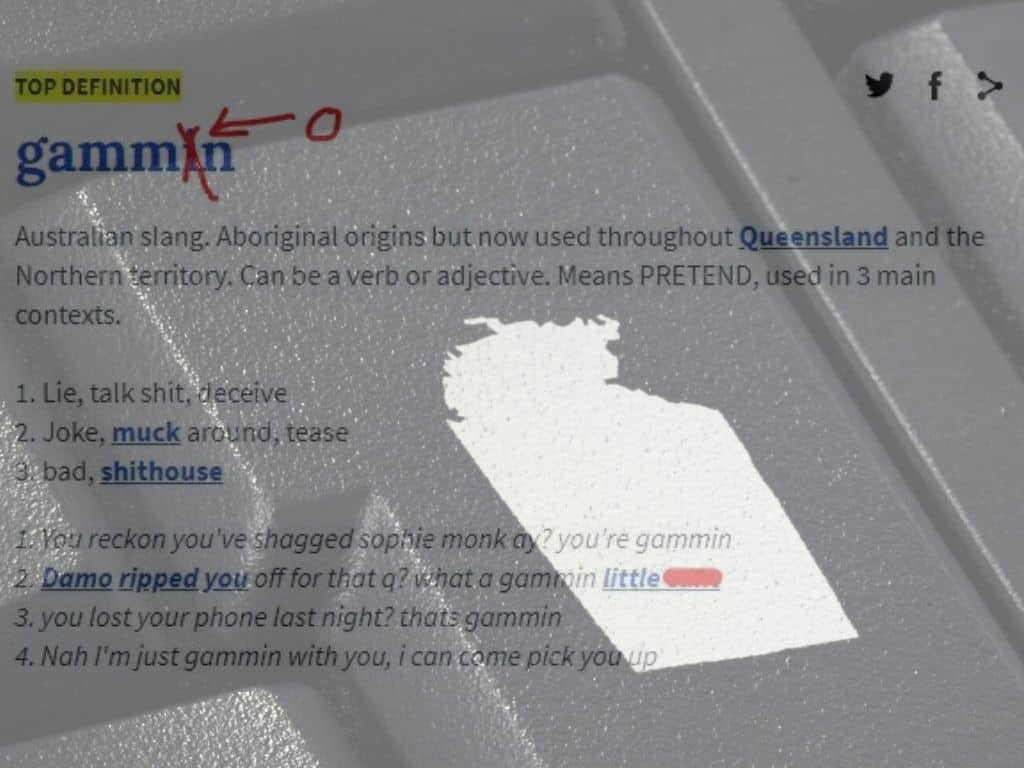 We are back with what was called ‘what’s gammin’. There has been two major changes. First we have gone with the popular vote – or the vast weight of hate we received – and moved from gammin to gammon and punished ourselves for our stupidity.

And the second change is we are adding ‘what’s good’. Just to show we are not just negative Nancys here at the former media outlet known as the NT Independent.

It seems the Gunner Government has managed to help the NT avoid, thus far, community spread of coronavirus. To say that is good is a massive understatement. It is gold dust.

A wave a day keeps the coppers away

A driver put his arm out the window to warn an overtaking driver on Vanderlin Dr on Wednesday that there was a cop with a speed camera ahead. Which is good for old mate not copping a fine. Bad for copper coffers. And potentially bad for the road toll in the future.

Not copping a ticket is good.

Not known at this address

The jury is still out on whether this is good or gammon. The NT Government is running a $5000 competition for Territorians to update their addresses with Medicare if they are still listed as living in another jurisdiction. This is because federal GST revenue is allocated based on your Medicare address.

We are part of the problem

We started this column last week calling it ‘What’s gammin’. Which makes us pretty gammon. The NT Government should look at banning us for our gammoness rather than because they don’t like naughty Facebook pages.

We are as gammon as.

We were listening to the Kriol news headlines on ABC radio when they were talking about the $500 the NT Government was offering teachers to stay in remote communities over the school holidays. We couldn’t make out most of the report, but they summed it up nicely by calling it what it is: ‘sit down money’.

No bullshit Kriol is good.

In this global COVID-19 pandemic, and the disastrous economic fallout that will follow, it is comforting for Chief Minister Michael Gunner to have business heavy-hitter Cameron Angus as a business policy adviser in his office.

Mr Gunner once referred to Mr Angus as his best mate on radio. As far as we know Mr Angus has not been on radio and has not had the chance to return the favour.

He was most recently Mr Gunner’s second most powerful spin doctor but had his communications head lopped after he was held responsible for the chief minister’s office denying to the media that the boss had gone to Melbourne for a $5,000-a-head Labor party fundraiser.

We do not know if he has ever stacked shelves at Big W and thus if he is qualified for his new job.

And no word if the Arts degree-wielding Mr Angus had to take a pay cut.

Policy advisers with no relevant qualifications for the job in the time of a crisis. That’s gammon.

The internet of government

We were told by one happy parent, the My Gov app is now working again after the crash that came with the federal government’s Job Keeper program.

The fact it is officially written myGov is gammon. Same with the JobKeeper program.

While My Gov is actually gammon, that it’s working is good.

In an article we wrote after the Gunner Government joined the ranks of North Korea (Kim Gunner-un) and started banning media, we quoted NT Independent publisher Owen Pike who also runs the Gumment Facebook page. It’s a page that makes the government sad.

“It definitely reflects on the government’s thin skin because, trust me, what I do takes little talent,” he said.

While it is good to expose how sooky la la the government is, Gumment is gammon (now made official by government decree).

A sorry story for a booze hound

This week a CLP candidate visited a campaign supporter’s house and found a fully stocked wine fridge that was chained, and pad locked. Word is the supporter behaved badly and had the fridge locked by their partner as a last, desperate measure.

The CLP candidate quietly extended an invite to the hopeless lush, to come around to her’s if said lush needed a drink.

Locking up the grog fridge is gammon and so are sneaky invites during prohibition.