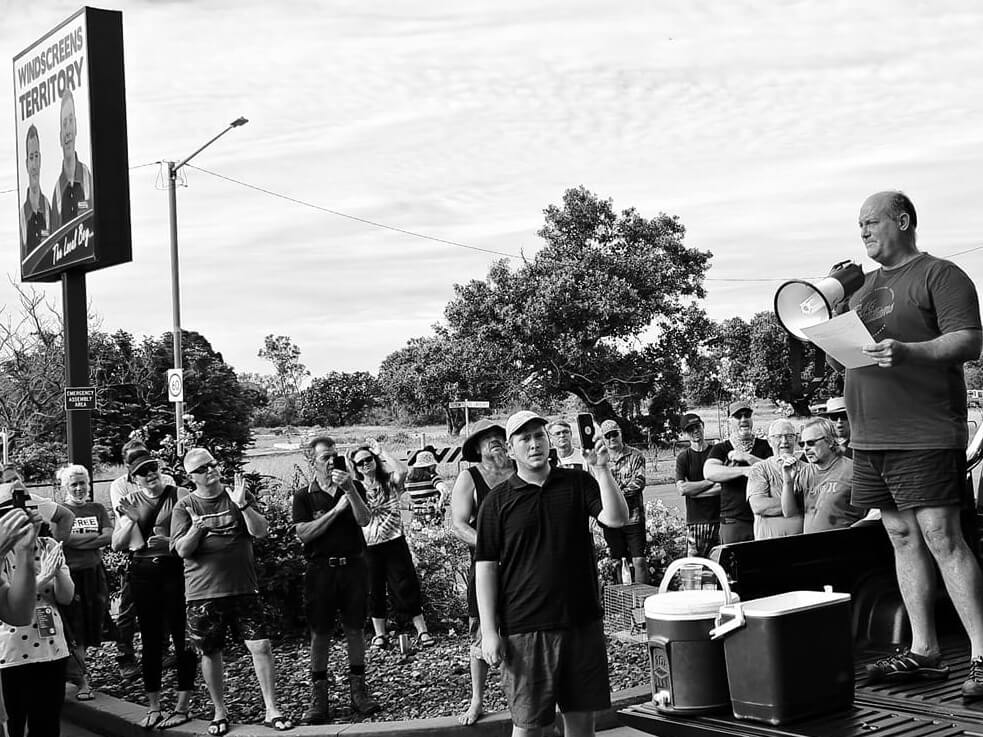 Five Territorians who attended a rally against the NT Government’s COVID vaccine mandate policy at a Coconut Grove business on Monday have been fined more than $5000 for breaches of health directives, just a day after the acting police commissioner said he had “no issues” with the protest, NT Police said.

More than 100 people attended the rally at Windscreens Territory Monday morning to show their support for the business which police had ordered to shut down for alleged breaches of the chief health officer’s COVID-19 directives last Friday.

Police alleged the business had failed to submit a COVID safety plan, did not keep a vaccination register and that the owner and two staff were not vaccinated.

The order to shut the business down attracted a strong response on social media with more than 100 people showing up to protest the government’s mandate policy and support the local business.

Acting commissioner Michael Murphy told reporters on Monday that police had attended the protest to ensure all participants obeyed the health directions and said “there was no issues from Northern Territory Police”.

He was then asked how unvaccinated people could gather while a lockout was in effect.

“In saying that, obviously too, there’s some inquiries that need to be undertaken about lawfulness, satisfying the reasons to leave the house,” he said. “Everyone’s got a right of reply”.

However, in a statement released Tuesday afternoon, Incident Controller Acting Commander Lauren Hill said five infringements had been issued to individuals for breaches of the health directions on Monday to participants at the Windscreen Territory rally.

She added that more infringements from the event may also be issued.

“The CHO Directions are law, they are not negotiable and police are no longer taking an educative approach when it comes to compliance,” Ms Hill said.

“Operation Crown investigators continue to review footage taken at the location, and where a breach of the CHO Direction occurs, further infringements may be issued”.

The penalty for failing to abide by the CHO Directions is $5,024 for an individual and $25,120 for a business.

Steve Arrigo, the owner of the business, said during the protest that he will raise the issue of the Gunner Government’s “unlawful” closure of his business with the government.

Meanwhile, the NT Government reported 594 new cases of COVID-19 in the community, with 32 of those in hospital, bringing the total to roughly 2600 cases.

Chief Health Officer Doctor Hugh Heggie said NT hospitals still have ample capacity to manage day to day operations and said he is confident in the measures in place.

“We probably do have community transmission, as we expected as the case numbers go up particularly in Darwin and in that age range of 20 to 39,” Dr Heggie said during Tuesday’s press briefing.

“So, often people who do actually go out to hospitality and other venues and that’s the reason potentially for that increase in numbers.

Territorians and visitors are now required to show proof of their vaccination status when dining in at licensed venues.

“We recognise that cafes are not set up to ensure the same level of compliance as a licensed venue,” she said.

“The clear differentiator in the CHO direction is if you are a licensed venue, whether a restaurant, bar, hotel or club, the vaccine pass rule applies to you.”