Fire destroys Tennant Creek’s only grocery store, may have been set 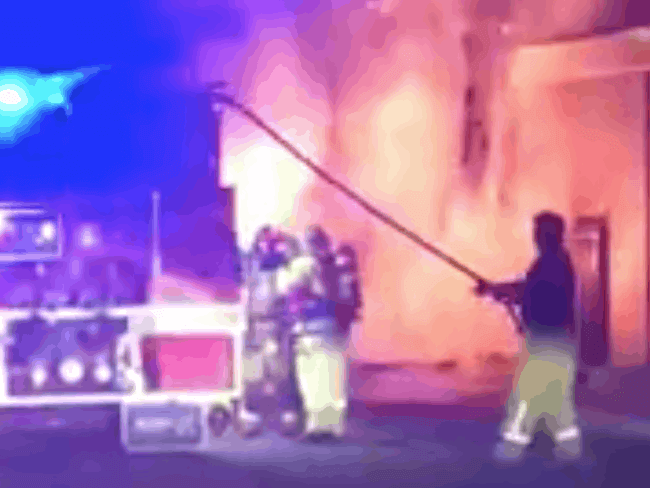 Tennant Creek’s only grocery store, Tennant Creek IGA, has been ravaged by a massive fire Sunday evening that claimed nearly a million dollars worth of grocery stock, the NT Fire and Rescue Service said.

Local fire crews were alerted to a fire at the back of the supermarket on Patterson Street at around 7:25pm Sunday night.

NT’s Fire and Rescue have not released a cause of the fire but a source told the NT Independent it appears as though the fire was intentionally set.

The initial investigation suggested the fire spread from bins and pallets burning at the rear of the building.

NT Fire and Rescue Service Acting District Officer David Letheby said the fire had spread into the building itself when firefighters arrived.

“They discovered black smoke issuing from a number of the vents around the ceiling space and the fire had progressed into the ceiling,” District Officer Letheby told ABC.

He said the fire fight went on for a couple of hours and about a third of the roof had collapsed and grocery stocks were seriously damaged inside the building.

Mr Letheby said no one had to be evacuated as the fire started after store hours.

“It did cause damage to adjoining shops, but the crews managed to stop it spreading to that row of buildings that join the IGA,” he said.

Mr Letheby said there will be contingency plans underway, including an assessment of whether the warehouse could make supplies available.

“You’ve just got one food store in a major town like Tennant Creek with 3,000 or 4,000 people,” he said. “It’s going to be a trying time for the people of Tennant Creek, I can imagine.”

IGA management posted a notice to its Facebook page saying that the store will be closed until further notice. They said they are doing everything possible to get their operations back up and running.

“In the meantime we will be looking at all options to keep supporting our community and our customers during this time,” the post said.

In a separate post, IGA management announced that some grocery items such as milk and bread are available at the back of the town’s BP Complex Tennant Creek.