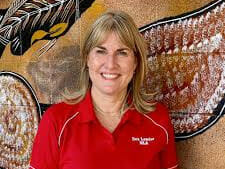 The Gunner Government is taking federal cash intended for private companies to build and upgrade the Territory’s roads and using it to hire more public servants, while at the same time paying more consultants for “specialist advice”, the Estimates Committee was told by a senior public servant.

Department of Infrastructure, Planning and Logistics (DIPL) chief executive Andrew Kirkman made the surprise revelation after being asked by the Opposition to explain how DIPL was finding cost efficiencies in the face of a government fiscal crisis that will see debt increase to $8.4 billion this year from $1.8 billion in 2016.

Mr Kirkman told Estimates hearings the department would not be reducing staff numbers to find cost savings and had instead looked at reducing its fleet and making “some adjustments as required” in the department, before suggesting federal money was being used to increase departmental staffing numbers.

“I should also make the point that as we are absorbing efficiencies, we are also, at times, able to increase our staffing base to deal with the big programs we have on foot,” he said.

“A good example of that is the roads projects we have. We have been able to use some of the [federal] funding we get for roads programs and apply it, with approval, to our staffing level.

“Whilst efficiencies mean that we have to tighten in certain areas, we have program funding we can use as well, which sustains our staffing levels at the same time.”

The revelation surprised the committee, including CLP Member for Nelson Gerard Maley.

“You get money from the Federal Government to deliver big programs, such as roads. You get approval and do not build those roads but you increase your staff numbers, is that correct,” he asked Mr Kirkman.

Infrastructure Minister Eva Lawler immediately tried to refute the assertion, but Mr Kirkman continued by explaining that while the department is “delivering a huge amount of roads”, he seeks approval from Ms Lawler and Cabinet to use an unspecified amount of the money that is supposed to be spent on roads to instead keep staffing levels up.

“We then seek [NT] Ministerial and Cabinet endorsement for that funding to be applied also to our personnel expenditure.”

Mr Kirkman also revealed some of the money meant for Territory roads is used to hire consultants to “assist us with specialist advice on how we deliver our roads”.

It was unclear why that was necessary if they were hiring more public servants to focus solely on roads projects with the federal money.

The NT Government does not build roads itself and instead awards tenders to private companies to construct and repair the Territory’s road network.

Mr Maley told the NT Independent the government needed to explain to taxpayers at all levels how using money for roads to hire public servants was being permitted to occur.

“The Government should further explain this process of staff increases being connected to federal funding,” he said.

“The Minister seemed to be pretty cagey on it during the hearing and we need more clarity.”

In October, the Morrison Government pledged $190 million for NT roads and transport infrastructure projects as part of its 2020 Budget that was intended to stimulate local private sector jobs.