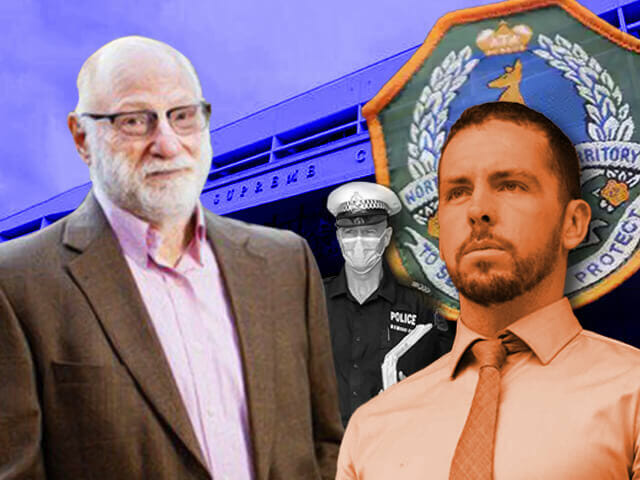 Police Commissioner Jamie Chalker and the Director of Public Prosecutions have refused to explain why an American use-of-force expert paid by police who provided evidence against Constable Zach Rolfe was used at the committal hearing but not during the Supreme Court murder trial.

Criminologist Geoffrey Alpert, from the University of South Carolina, was first contacted by police investigators in December 2019 as they built their murder case against Constable Rolfe after failing to attract any Australian experts willing to testify.

Detective Superintendent Kirk Pennuto wrote to Mr Alpert in January 2020 – nearly two months after Constable Rolfe had been charged with murder – via email after a phone discussion to feel him out.

“Before progressing our discussions in any formal way, it is important that we make sure we are have (sic) a good fit otherwise I will struggle to be able to convince my bosses of the value in using your extensive expertise,” Supt Pennuto wrote.

He added that it was the belief of investigators that Constable Rolfe had disobeyed orders during the attempted arrest of Mr Walker.

Later in the email, Supt Pennuto wrote that there was “a lot of sub text not referred to here that is easier left to a discussion via telephone”.

Professor Alpert was used as an independent expert at the committal hearing in which he told the court the first shot fired by Constable Rolfe at Kumanjayi Walker was “justified” but that the second and third shots were “excessive, unreasonable and unnecessary”.

That testimony was heavily relied on to deem Constable Rolfe fit to stand trial for murder at the Supreme Court, but it remains unclear why Professor Alpert did not testify at the trial.

The NT Independent revealed last week that police relied on the evidence of Sgt Andrew Barram as part of the investigation and that he testified at the murder trial despite the head of professional standards suggesting he was “not suitable” and had a “conflict of interest” due to his deep entrenchment inside NT Police.

Supt Pennuto had pledged in another internal email to get a subject matter expert “at a much higher level” than Sgt Barram. Those attempts included approaching NSW police and Queensland Police, who appear to have not been interested in providing a use of force expert for the case before police settled on using Prof Alpert.

One draft report dated February 24, 2020, stated that there was an “initial failure in communication” between officer in charge at Yuendumu Julie Frost and Constable Rolfe’s Immediate Response Group which may have led to “the lack of following plans and orders”.

That report was also critical of investigators who interviewed witnesses in Yuendumu immediately following the shooting, however when Prof Alpert shared his next draft report on February 28, all criticism of those in charge had been removed.

Other emails showed Detective Sergeant Wayne Newell had “offered a couple of suggestions that you may wish to consider” to Prof Alpert on one draft.

In another email, Prof Alpert wrote that he had made “some changes on it (the report) for you to review” and later sought “corrections or modifications” from Sgt Newell.

In another instance on March 30, 2020, Sgt Newell had asked Prof Alpert to reconsider a sentence about Sgt Frost’s arrest instructions, suggesting it may “require more context”. Prof Alpert responded on March 31 that it was “more efficient to remove” the line.

The question of whether Constable Rolfe was told to arrest Mr Walker if seen or wait until 5am the next morning was a major point of contention during the trial.

Prof Alpert stated in the March 31 email that he would send his bill along “as soon as I hear from you that all is well”.

NT Government tender documents show Prof Alpert was awarded a tender by police on January 22, 2020 for his services valued at $99,750, but it could not be confirmed if the total amount was paid. Mr Chalker refused to answer questions sent by the NT Independent last week.

It was previously reported that investigators were concerned at the speed at which Constable Rolfe was charged with murder just four days after the shooting and following a 90-minute meeting with the DPP that included an incomplete and rushed brief of evidence.

Current DPP Lloyd Babb defended the rushed decision to charge by suggesting earlier this month that “the matter was committed for trial by a Local Court Judge, following a contested committal”.

“The Local Court Judge found there was a case to answer,” he said.

He refused to explain why Prof Alpert was used at the committal hearing but not the trial.

Mr Rolfe was acquitted of murder and two alternative charges in a unanimous Supreme Court jury verdict on March 11.

It is unclear if the ICAC will investigate allegations police actively pursued the charge against Rolfe by excluding any other evidence that may have pointed to a different outcome.

Commissioner Michael Riches said his investigation will explore the processes and allegations of political interference in the four days between the shooting on November 9, 2019 and Constable Rolfe’s arrest and charging on November 13.

That inquiry is expected to include public hearings.