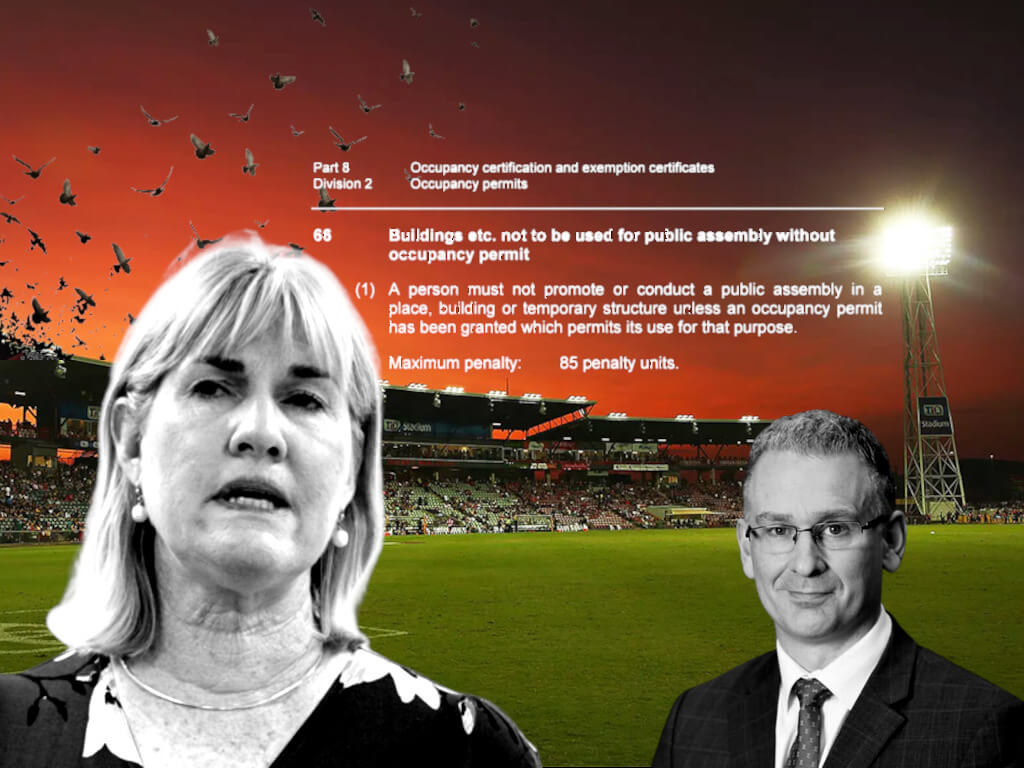 The Gunner Government is under investigation by the NT’s anti-corruption commissioner over its handling of the TIO Stadium fiasco following Infrastructure Minister Eva Lawler’s extraordinary ministerial order to exempt the facility from building certification laws meant to protect the public.

Independent Commissioner Against Corruption Michael Riches said he has “decided to conduct an investigation” after making inquiries over the “last several weeks” into the stadium’s lack of an occupancy permit, and after Ms Lawler issued the unprecedented notice in the government gazette on Tuesday that essentially makes it legal for people to enter a premise that is not certified.

The surprise ministerial declaration came nearly two years after the Department of Infrastructure, Planning and Logistics claimed it was rectifying outstanding safety issues at the complex that remain uncorrected ahead of major events at the facility over the next couple of months that are expected to attract thousands of Territorians and tourists.

The NT Independent understands the ministerial notice issued by Ms Lawler may also serve to protect her from an alleged breach of the Building Act, after she recently called for Territorians in a Facebook post to “head down to TIO Stadium” to support a local footy team.

It is a breach of the Building Act for anyone to “promote or conduct a public assembly in a place, building or temporary structure unless an occupancy permit has been granted…”

Ms Lawler was aware the stadium did not have an occupancy permit since at least August 2020, when the NT Independent first raised the matter with her office and department.

Her office refused to respond to questions yesterday, including why she would encourage people to attend a facility she knew did not have a permit and why neither she nor the department took more urgent action to fix the public safety issues.

Ms Lawler’s Facebook post was sent to the ICAC yesterday as part of a series of questions from the NT Independent around the Minister’s handling of the situation.

Mr Riches said he had “noted” the Minister’s gazette declaration yesterday morning, but dated Tuesday March 8, and later in the day Wednesday received correspondence from Ms Lawler and Director of Building Control Mark Meldrum relating to “inquiries I have been making over the last several weeks with both the Minister and Chief Minister (Michael Gunner)”.

“This afternoon, I have also received information from an independent expert in respect of certain matters relating to the TIO Stadium,” Mr Riches said in an email.

“I have communicated that information to the Chief Minister and Minister.

“I note that I have received assurances from the Government that there are no safety issues relating to the TIO Stadium.

“I have decided to conduct an investigation.”

Documents obtained by the NT Independent under Freedom of Information laws last year showed the department had not fixed the safety issues raised in 2020 and that an engineer’s report had determined the stadium had insufficient fire hydrant pressure that could put lives at risk, among other potential risks.

The engineer’s report was heavily redacted with concerns around “base building elements” blacked-out, including fire services and other mechanical and electrical issues, preventing the public from knowing what specific faults were still not rectified.

The building had not obtained an occupancy permit when it was first built in 1990 and efforts to obtain one were inexplicably discontinued by bureaucrats in 2009, documents show.

The department said in August 2020 – ahead of two AFL games at the stadium – that  it was “working with building certifiers to finalise the certification” for the stadium’s grandstand building, declaring the building “safe” for the highly-attended games, but offering no evidence of what it relied on to make the claim.

Building industry insiders said Ms Lawler’s remarkable declaration to exempt the stadium from certification laws this week before it had completed rectification works was troubling.

“If the building was actually safe, it could just be signed off on and granted the occupancy permit,” a building industry source told the NT Independent.

“The fact they can’t do that raises alarm bells.”

Mr Riches said part of his investigation into the matter would include examining whether the section of the Building Act Ms Lawler may have breached by encouraging people to attend an uncertified building applied to the stadium, “in light of information that has been provided to me”.

“I will not comment further as I will not prejudge the outcome of my investigation,” he said.

“Matters relating to the safety of TIO Stadium should be referred to the Minister.”

Ms Lawler and Mr Gunner’s director of communications Maria Billias did not respond to questions.

Mr Riches, who became the ICAC in July 2021, has previously said he will only investigate the most serious cases of high-level corruption in the NT Government, in an effort to focus the ICAC’s resources on “more timely conclusions”.