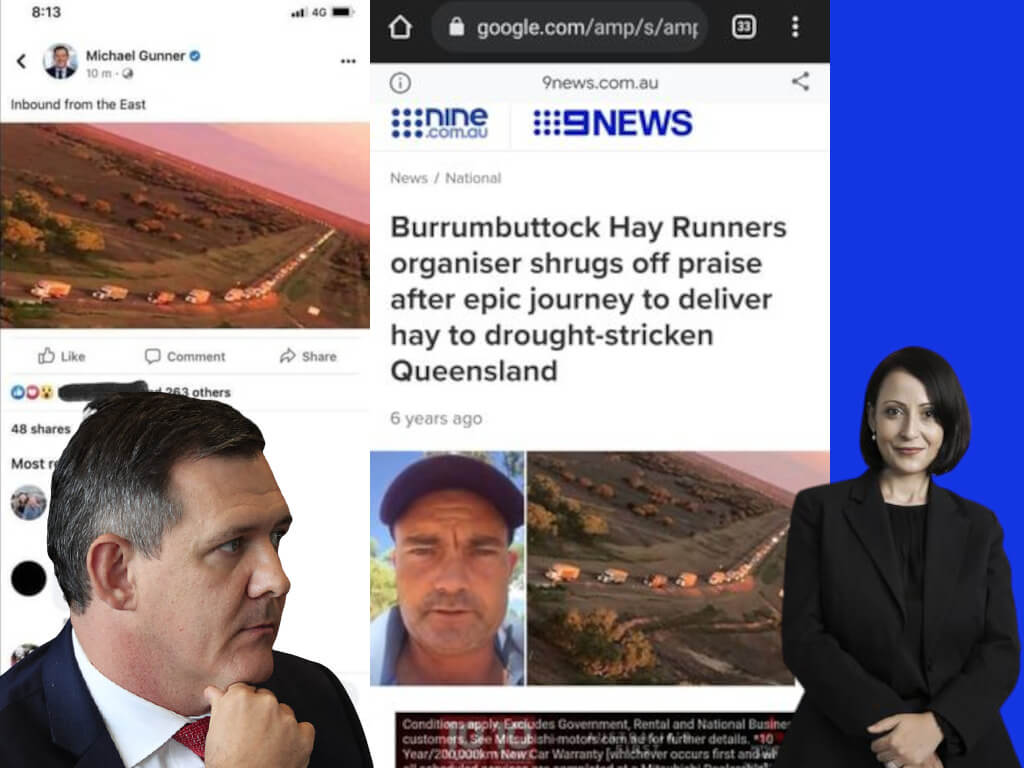 Chief Minister Michael Gunner’s media team has deleted a Facebook post that used a six-year-old photo of a truck convoy taking hay to drought ravaged graziers in Queensland, that seemed to suggest they were trucks heading to the Territory to replenish supermarket shelves.

The image was posted on Thursday morning and was accompanied by the words, ‘Inbound from the East” but was deleted by early afternoon with no explanation.

However, the picture was actually from the Burrumbuttock Hay Runners Facebook page from 2016 and was included in a news article by Nine News at the time about organiser, fourth-generation farmer Brendan Farrell, selflessly refusing to take praise for his drought relief efforts, saying he was just a “bloke with a truck” who put his hand up to help.

Mr Gunner’s social media communications director Songul Demirci – who would earn at least $200,000 a year – did not respond to questions from the NT Independent about why the picture was used and why it was deleted without explanation or apology.

The photo had been praised in local media this morning for showing relief from the Territory’s recent food shortage due to flooding was on the way, but some keen-eyed Territorians recognised the picture.

It’s unclear why the photo was used to mislead Territorians and why no apology had been offered. Mr Farrell had organised the 125-truck convoy in 2016, which had driven from the bottom of NSW, and had taken about 5000 large hay bales to about 270 drought stricken Queensland graziers.

It was the tenth hay run he had organised.

“Social media is putting a lot of pressure on me, saying I’m famous and all this other type of thing – but people need to realise I’m just a bloke with a truck,” he told Nine News.
“You don’t have to be famous to help people. You don’t need to have a million dollars to help people.
You put your hand up and you just get on and do it.”

It’s not the first time Mr Gunner’s Facebook page has been embroiled in controversy.

In November, Mr Gunner’s page identified a woman who had caused a COVID-19 outbreak as a “sex worker”, but later deleted parts of the post that he had originally declared as “obviously crucial” information.

The full post was deleted and the version of the speech without the reference to sex work was inserted in a new post, along with an apology.

Later the same month, Mr Gunner allowed an unvaccinated social media spin doctor to continue to work despite laying off hundreds of other public servants who refused to be vaccinated.