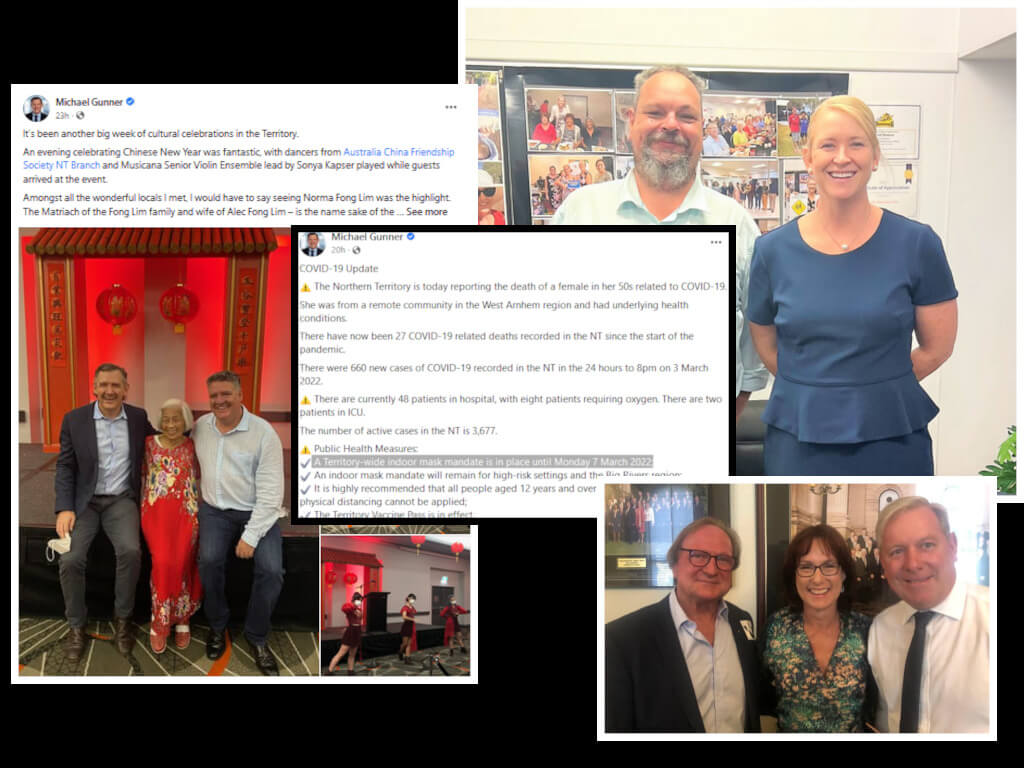 Chief Minister Michael Gunner removed his mask for an indoor political photo opportunity while holding his arm around an elderly woman, in the latest example of NT politicians posing for pictures that appear to contravene the chief health officer’s COVID-19 directions, and follows Victorian politicians being fined by police for doing the same thing.

Mr Gunner and Labor MLA Mark Monaghan both posted the photograph to their Facebook pages on Friday, which shows them sitting with their arms around Norma Fong Lim, an elderly woman and matriarch of the Fong Lim family. The post said the photo was taken at a Chinese New Year celebration on Thursday night.

The photograph shows the Chief Minister had his mask in his hand, and Mr Monaghan is believed to have had his in his pocket, while other photos from the night show dancers wearing masks while performing. Both were photographed with masks when posing with other people on the night.

The NT Independent understands the possible breach has been referred to police.

Ms Fong Lim would be considered vulnerable under NT Health directions and data would indicate she would be in a high risk category if she contracted COVID-19.

In a post to his Facebook page published about the same time as the photos, Mr Gunner announced the death of a woman from COVID-19 and reminded people there had been 27 COVID-19 related deaths in the NT, and that there was an indoor mask mandate in place.

In the middle of last month five members of Victoria’s Coalition, including Opposition Leader Matthew Guy were fined by Victoria Police for breaching mask rules.

The Age reported police investigated because pictures of the MPs posing inside parliament without masks on with former AFL coach Kevin Sheedy were posted on social media.

On Wednesday, Mr Gunner announced the indoor mask mandate would be lifted tomorrow, in accordance with health advice, although the advice relied on to select Monday as the day was not publicly provided.

An earlier post on his site showed Minister Paul Kirby also posing maskless for political photos, while inside and close to people during the time masks were mandated.

Mr Monaghan has other photos on his Facebook page showing him posing for photographs inside, close to people not wearing a mask, while the mask mandate was in force. So does Labor MLA for Daly Dheran Young.

In keeping the possible CHO violations bi-partisan, CLP MLA for Barkly Steve Edgington also had unmasked photos of himself and inside standing next to people, some classified as “vulnerable” by the government on his Facebook page.

All off those politicians also have many photos of themselves with masks on posing for political opportunity photos on their Facebook pages.

While Mr Gunner and Hugh Heggie recently said the advice from health experts was that the Territory was past the peak of the current COVID-19 Omicron wave, as infection rates continue to drop, the requirement to wear a mask indoors will not be lifted until Monday.

The photograph seemingly contravenes the CHO’s Directions 142 which came into effect on New Year’s Eve.

The penalty for failing to abide by the chief health officer directions issued under section 56 of the Public and Environment Health Act 2011 is $5024 for an individual and $25,280 for a business. 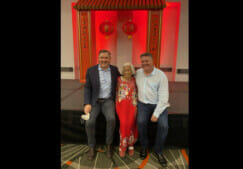 Other Territorians fined for not wearing masks

Police have said they have fined people in the Northern Territory for not wearing masks while mandated.

Police Commissioner Jamie Chalker did not respond to questions about whether he was going to investigate and potentially fine the different politicians, while Mr Gunner’s alleged offence has been reported to police by outspoken former NT Police officers Carey Joy and Leith Phillips, who both oppose the vaccination mandate.

“You are going to place the lives of vulnerable Territorians at risk. So just take some time, be more community-minded, hold your peace until we get out of the mask mandates and the lockdowns and then resume your activities lawfully,” he said.

“I can’t be bothered dealing with your rubbish in the interim.”

Dr Heggie and the Health Department also did not respond to questions or explain if there was some exemption that allowed masks to be removed for photos, or for politicians working in an official capacity.

Under the directions, masks must be worn inside for those over 12-years of age, if people cannot maintain a 1.5 metre distance, but there are exemptions.

“These Directions apply to everyone in the Territory,” the rules state.

“The person must wear the face mask securely over the person’s nose and mouth”.

Exemptions include for health reasons, communicating with a person who is hearing impaired where the viability for the person’s mouth is essential, eating and drinking, and where the mask needs to be removed to ascertain a person’s identity, or in an emergency.

In announcing this week the mask mandate would be in place until Monday, Mr Gunner said the government “strongly recommends” continuing to wear a mask, even after it will no longer be compulsory.

He said the mandate would remain in place, “to be certain we have locked in this downward trend in cases”, and that the easing of restrictions was not a sign that the threat from the virus was over.

Late last year, Victorian Police fined Premier Daniel Andrews $400 for two breaches of COVID-19 directions for failing to wear a mask while walking from his car across a car park to address journalists at a press conference two days in a row.

“I expect Victoria Police to assess this and if they choose to issue a fine, of course I will pay it,” Mr Andrews told the media before the fine was issued.

“If they do not issue a fine I will donate the same value to a charity working to support people in this pandemic because whilst this was an oversight, oversights matter — everyone needs to follow the rules and I am sorry it occurred.”

Ms Billias was asked if Mr Gunner would make a pubic apology, and if he was in contravention of the CHO’s COVID-19 directions, if he would donate the equivalent of a fine to charity if he was not fined, just as Mr Andrews had pledged.

She did not respond.

CLP media adviser Kyrrie Blenkinsop did not respond to questions by publishing time.