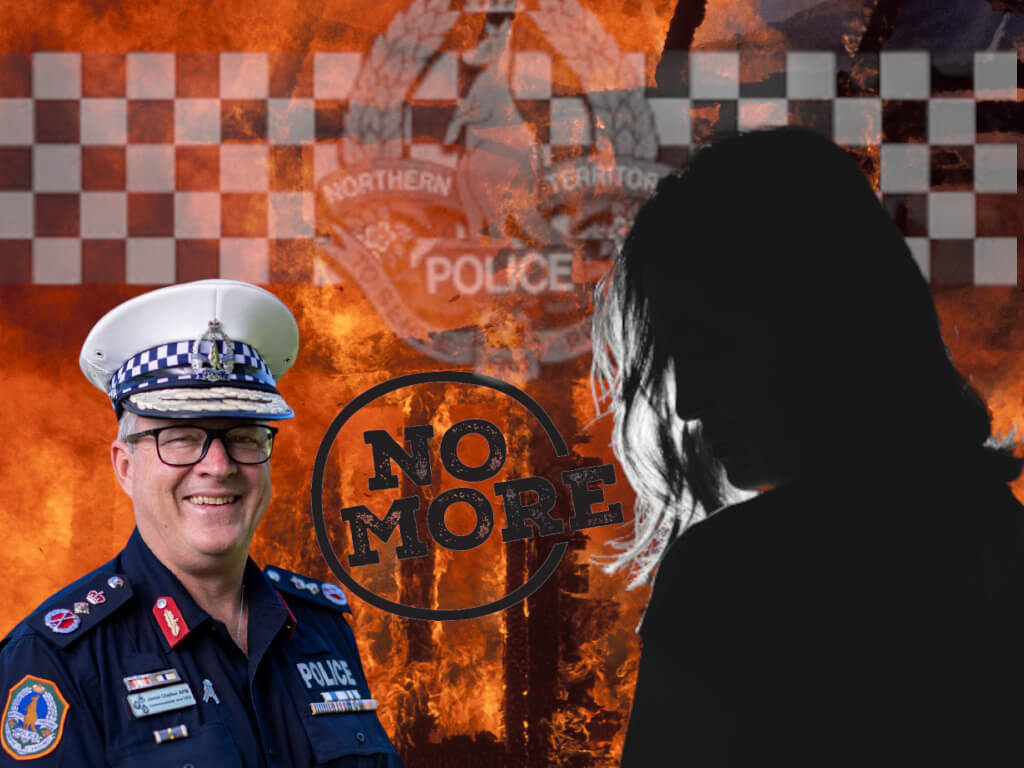 Police Commissioner Jamie Chalker gave an emotional speech to an anti-domestic violence event about a woman who was set on fire by her husband last month, but failed to tell the audience the man had been bailed by police three days before the homicide after breaching a domestic violence order against her.

Mr Chalker addressed the No More Violence breakfast in Darwin on November 25, using the woman’s death as a tragic example of domestic violence, and lamented that it had not made national headlines.

“What I want to say to everyone in this room, and the Northern Territory community is, you will not silence me,” he said during his speech.

His words came despite the fact that NT Police had published three press releases, none of which gave even a hint as to the real nature of the act against the woman, the first release referring to the tragedy simply as a structure fire.

The reality of the situation was first reported in the NT Independent.

Outside Mr Chalker’s speech a month after the attack, and a few comments on Alice Springs ABC Radio, police have never made the real details of the death public.

He also lamented that police did not know what the woman was facing the night she was set on fire on November 5.

“That victim, only hours earlier, sent a text message to her young daughter, that said, ‘Today, your Dad is going to kill me. I love you. Please don’t cry for me’,” he said.

“And we didn’t know. And her community didn’t know. We need to do things far better. To have a victim feel so helpless, but her thoughts were to try and provide some level of support and comfort to her child, knowing what then sadly transpired.

“As a group we should never be silent about this. But we have to take a more proactive action. We have to call it out on every occasion. We have to be more supportive.”

What Mr Chalker did not say, but the NT Independent has had confirmed by several sources, was that the husband had been bailed on the Tuesday in Tennant Creek after breaching a domestic violence order that had the woman as the protected party.

She was incinerated on the Friday, and died on the Sunday.

“Following the DVO charge, a Tennant Creek-based acting sergeant granted the soon-to-be-killer bail,” said one source, who was outraged by the police commissioner’s public speech.

“The husband then tracked his wife down to Alice Springs and killed her. It appears Chalker wants to grandstand on domestic violence but not come clean.

Another source said there was a full no-contact order against the man on behalf of the woman, possibly running for five years.

“He had several reports of breaches, but she didn’t make a formal complaint until the last one where he was arrested for breaching,” they said.

“He was granted police bail when it probably should have been a refusal and go to a judge to determine.

“It was during the day on a weekday so not even after hours. He was bailed with pretty simplistic conditions, to go to a particular community, not to go near her and something else.

“Then that week he sets her alight. He should have survived so that he could go through the rehab and then be charged with murder.”

Another police source said that if police deny bail, the alleged offender then has to apply to a judge for bail.

‘Did we see that in national headlines?’: Chalker

Mr Chalker said the Territory’s domestic violence problem had grown worse in the last 12 months, saying NT Police were dealing with almost 10,000 domestic violence cases per year, and how difficult it was to deal with the cases properly.

“We have to let people know we can and will help them. As police, we try our best but what is inexcusable, is when we constantly remain the 24/7 agency on the ground,” he said.

In his speech, Mr Chalker questioned why the woman’s death did not make national headlines when other homicides did, but made no mention that police had not released details of the nature of the death, even after the NT Independent reported them.

Several sources told the NT Independent at the time that the woman was able to tell police what had happened to her, describing how on the night of November 5, she had locked herself in the toilet when her 36-year-old partner poured petrol under the door. They said the woman refused to open the door so the man set her on fire.

One source said the only parts not burned were the palms of her hands, the soles of her feet and her bottom. She was intubated in hospital, the source said.

On November 6 at 9:14am, NT Police issued a press release asking for witnesses to what they said was a structure fire in the Hidden Valley Town Camp about 11pm the night before where two people were taken to Alice Springs Hospital in a serious condition.

The next day, at 10am, a police press release said they believed the fire was a result of a domestic violence incident. At 3.47pm they issued a statement saying the woman had died.

In the last release, Detective Senior Sergeant Michael Schumacher said: “This woman’s death was a needless tragedy. Detectives are now treating this domestic violence case as a homicide.”

The next morning the NT Independent reported the details, and it was after that the NT News and the ABC wrote articles quoting Det Snr Sgt Schumacher that it was still unknown how the fire started but confirmed that fuel was involved.

There was no press release issued by NT Police with the “new” information, and it wasn’t until November 12 that police issued another statement saying the husband had died, and a report would be prepared for the coroner, but did not mention domestic violence.

NT Police do not answer questions from the NT Independent, something which contravenes the force’s own transparency guidelines, and something they have never explained.

Mr Chalker told the anti-violence event that he stood in front of them with a “sense of failure”.

“And I have to reconcile that as a police force we can only do so much,” he said.

“I want to acknowledge every victim, and let you know as the frontline, we understand your pain. We understand your challenges, and we want to keep getting better to help you, and we don’t always get it right.

“When you come to us. When you call us, we will be there. And our job is to make sure that happens 100 per cent of the time. ”

Ms Manison appeared on Mix 104.9 where host Katie Woolf asked her about the NT Independent’s stories over the previous week that detailed horrific sex crimes not being reported to the public by police and if the government had directed the police media unit to cover up information in the public interest.

One of the sex attacks not reported by the police, but exposed by the NT Independent, involved the arrest of a registered sex offender who was found outside a child’s bedroom in the northern suburbs with a “rape kit” and disturbing videos of himself inside her room on numerous occasions.

It followed four other matters that the police have either not told the public about or omitted key information, including the actual nature of the alleged sex crimes.

In May, it was followed by NT Independent reporting a boy being allegedly raped by a man in a house in the community of Gunyangara – also known as Ski Beach – about 15km east of Nhulunbuy.

Mr Cross did not respond to a series of questions by the NT Independent about the alleged attack, but after being sent the questions, the media unit released a statement to inform the public that the man was arrested and would face court.

The NT Independent won Best crime Reporting at the NT Media Award in November for exposing the crimes. The awards, organised by the Media and Entertainment Arts Alliance, the Walkley Foundation and the Darwin Press Club, were judged by a panel of journalists and editors from major media outlets across the country.

“The suppression of crime-related details by senior police caused great angst in the community,” the judges said. “Thanks to [the NT Independent], other media outlets also took up the story, and it resulted in a review of police media operations.”

In March, Police Commissioner Jamie Chalker was asked about the media unit and said he is “certainly backing” his media team because “that’s what I do each and every day”.

He later said that the leaking of information about sex crimes that the police are suppressing – that is very much in the public interest – was akin to “throwing victims under the bus”. But he failed to explain how serious sex crimes being reported to the public in a way that protects the victim’s identity is harmful.

If you or anyone you know is a victim of domestic and family violence, you can call police at any time on 131 444 or in an emergency call triple-0.